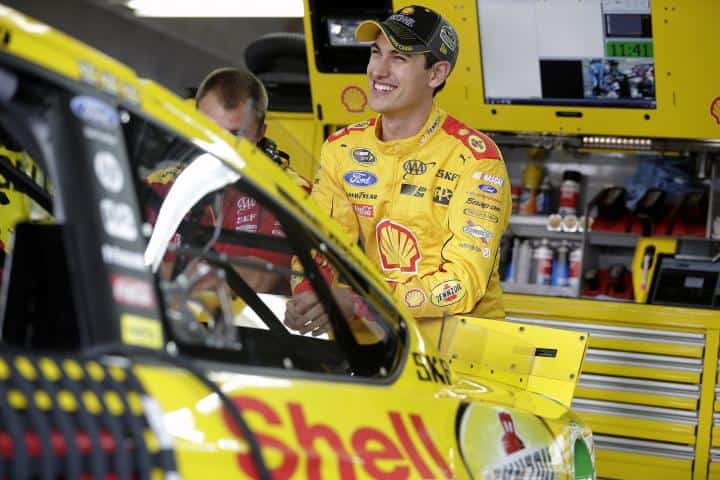 For the second time this weekend, Matt Kenseth dominated, leading a race-high 153 laps, but came up short when the checkered flag flew. This time, it was Joey Logano who emerged with his second consecutive victory in the Hollywood Casino 400 Sunday afternoon at Kansas Speedway.

Contact with Kenseth that sent him spinning on lap 264 set up a green-white-checkered finish, and no one had anything for Logano, who cruised to the checkered flag 0.491 seconds ahead of Denny Hamlin.

Jimmie Johnson was forced to settle into third after a spirited battle with Hamlin. Kasey Kahne and Kyle Busch rounded out the top five.

Kurt Busch finished sixth despite struggling with his No. 41 Chevy for much of the weekend. Ryan Blaney, who has seen many of his Sprint Cup efforts this season sidelined by inclement weather cancelling qualifying, came home seventh. Carl Edwards, polesitter Brad Keselowski and Jeff Gordon rounded out the top 10.

The race was slowed by six cautions for 35 laps, but perhaps the worst came when hometown favorite Clint Bowyer slammed the wall on the backstretch, tearing the front end of the No. 15 Toyota completely apart.

Heading into the wild card that is Talladega, only Logano is locked into the next round of the Chase on the strength of two victories. Hamlin sits second after posting a fourth-place finish at Charlotte and a runner-up at Kansas. Kurt Busch and Edwards sit third and fourth, respectively.

Kevin Harvick, Gordon and Keselowski find themselves locked into a three-way tie for fifth. Martin Truex Jr., who finished 15th, currently sits eighth and on the bubble headed into next weekend.

It was only controversial because it was Joey. If was Junebug, Jeff, Ryan, Harvick or some other….cheers and beer for everyone and pats on the back all around. My two cents. Most people were fine with it, racing deal.