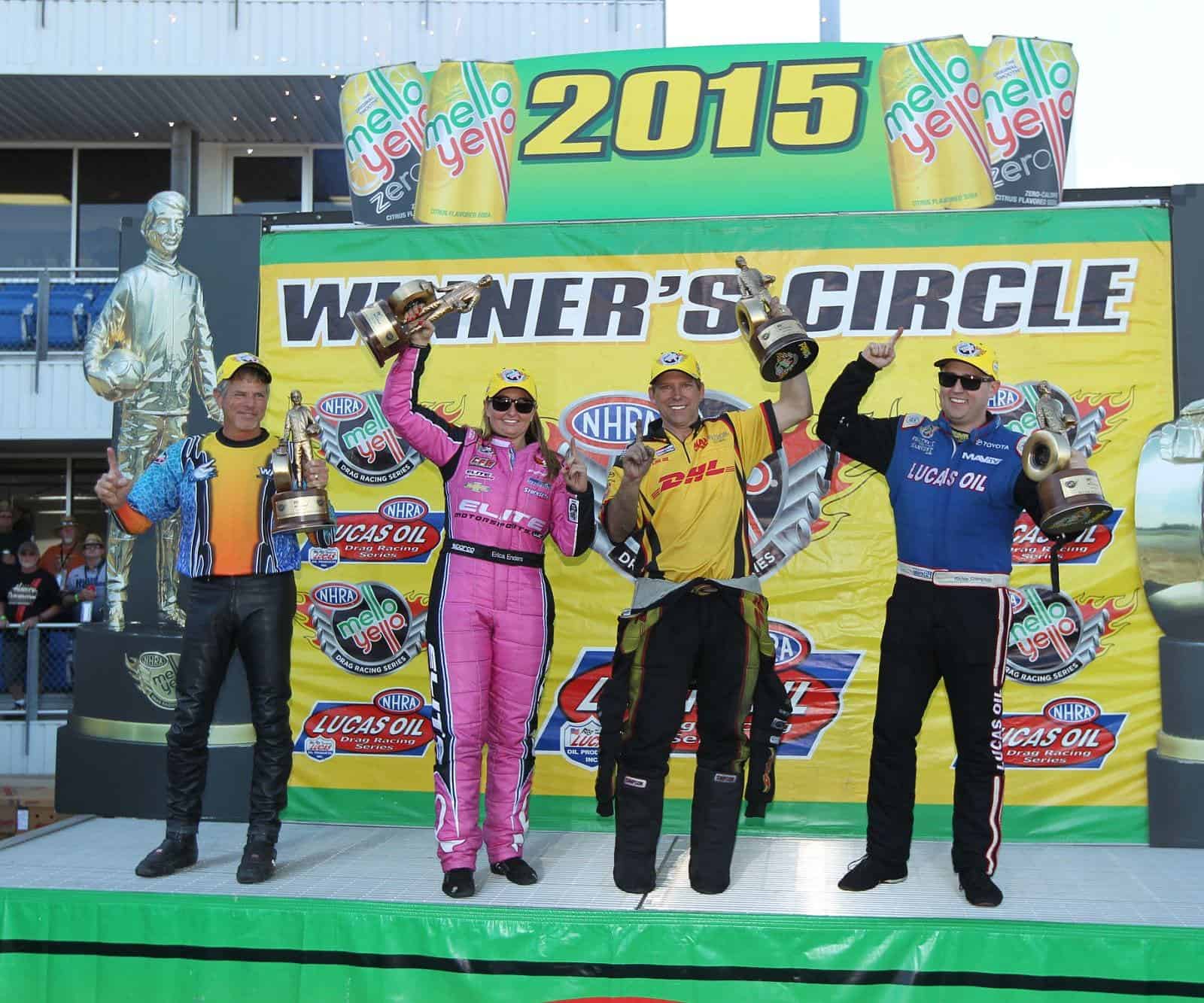 Sprint Cup Series: Just as the No. 20 team thought its driver was set to make a trip to Victory Lane and notch a spot in the Eliminator 8, leader Matt Kenseth went spinning off of Joey Logano‘s front bumper on lap 267, dashing his hopes of heading into Talladega with nothing to worry about. Instead, Kenseth finished 14th and is now in a must win situation headed into next week, now 35 points below the cutoff line for the top eight.

“It’s hard to drive a car with the rear tires off the ground. I was moving around the best I could,” Kenseth said after the race. “Joey was a lot tighter, a lot faster on the short run, but we were so much better on the long run. I could still kind of get up to the top and get around him. We caught those two lapped cars. ‘Crazy’ (spotter) told me I was clear and I was, I pulled up in front of him and he just lifted my tires off the ground and he wrecked us.”

As far as whether Kenseth wants to talk to Logano about the incident, he said “I don’t have anything to talk to him about really. He just plain wrecked me. Absolutely, 100%.”

“Honestly, Joey and I have really never had any problems. I’ve probably been one of his biggest supporters and fans and he just lost a fan and supporter, but I’ve always been in his corner,” Kenseth continued. “It was a difficult situation getting let go out of this ride and getting his new ride and being so successful. I was happy for him, but I definitely lost any respect I had for him before today, that’s for sure.”

Moving forward, the Joe Gibbs Racing driver will need a victory at Talladega next weekend to move onto the next round in the Chase for this year’s championship.

“You always race people like you’d like to be raced; that’s what I try to do until that changes and then you race them how they race you.”

Talladega isn’t likely a place where Kenseth would go for any kind of retribution against Logano after the spin at Kansas, especially given the high speeds at the superspeedway. But you can bet that he’ll do everything he can to avoid drafting with the driver of the No. 22 Ford come next weekend. – Beth Lunkenheimer

Xfinity Series: JGR Dominates, Regan Smith’s Future in Question – JGR was outstanding once again on Saturday afternoon. Leading every lap, the two Toyotas of Kenseth and Kyle Busch were unstoppable at Kansas Speedway. Leading a race-high 148 laps, Kenseth evidently lost to his JGR counterpart, Busch, who earned his fifth victory of the year.

But the major headline leaving Kansas is that of Regan Smith‘s future. The two-time winner this season for JR Motorsports told NBC Sports following the race that he will not return to the No. 7 car in 2016. Now a free agent, he has several options as we discussed in Eyes on Xfinity a few weeks ago. However, JRM did say that it is willing to field him in the No. 88 on a part-time basis if he does not compete full-time in the NXS next year. How will this effect Smith during the final few races? We will wait and see. – Joseph Wolkin

NHRA: Funny Car Fight to the Finish – Last race out at Maple Grove, the battle in Funny Car closed up quite a bit as points leader Del Worsham had a bit of a stumble, going out in round 1, while Fast Jack Beckman scored the win and set a national record, good enough to pull within just 16 points of Worsham. Beckman went into the Countdown looking like the man to beat, so one would think the sudden closing of the gap might be troubling for Worhsam, right?

That question may have been answered in Dallas at the AAA Texas NHRA FallNationals, when Worsham and Beckman faced off in the Funny Car final in a battle essentially for the category points lead. Worsham prevailed with a 4.041 second, 272.17 mph run to Beckman’s 4.077 seconds, 286.25 mph. He also defeated John Hale, Alexis DeJoria and Ron Capps to get there.

“I think we may have stolen this one today,” said Worsham. “It was definitely a challenge because we didn’t have the fastest car all day, so in between rounds the whole DHL Toyota team had to go back to work. The final was crazy. We got a good start and we were crusing along and all of a sudden the car just made a hard right hand turn. I let off and we hit the finish line and I didn’t know if we won or not until I heard it on the radio. Now we’ve tog a week off and we aren’t looking at the championship, we’re just going to prepare for Las Vegas and that’s the only thing that matters.”

Worsham held on to the points lead and extended it to 38 markers over Beckman with two races left.

In Top Fuel, Antron Brown‘s spectactular three-race winning streak came to a close when Brown went out in the semifinals, defeated by Richie Crampton who would go on to win the day as he defeated Steve Torrence in the finals. Crampton ran a 3.972 second, 283.07 mph pass to defeat Torrence who ran 4.074 seconds, 267.32 mph.

Crampton also beat Doug Kalitta and Brittany Force in addition to Brown en route the finals. It was his fifth race win of the season, so the sophomore slump does not apply to this second year driver.

“It’s hard to even fathom getting to seven final rounds in the short time I’ve been a professional driver let alone winning them all,” said Crampton. “I’m just so fortunate that when you give my team so many shots at a racetrack on a given day that they get it figured out.

“I’ve never even tried on a cowboy hat before but I sure like this one,” Crampton said, admiring one of the spoils of victory at Texas Motorplex. “I might just have to wear it the next time I go back to Oz. That’ll show ’em something.”

As for points, since second place Tony Schumacher went out in round one, Brown is still the leader in the category by 132 points with just two races left on the slate.

Erica Enders and team got their car sorted out after having mechanical issues last time out and she finished the day back on top once again, defeating Jonathan Gray in the finals with a pass of 6.467 seconds, 214.48 mph to Gray’s 6.489 seconds, 213.60 mph. Enders got by V. Gaines, Chris McGaha and Drew Skillman in earlier rounds before facing off for the Wally against Gray.

Enders entered the event as the points leader, with a 72-point advantage over second-place Greg Anderson, but thanks to the win, her eighth on the season, she extended her lead and now has 154 points over Anderson in her quest to win a second Pro Stock title. This is also a Mello Yello Drag Racing Series record for most wins in a season by a female driver.

It was the gator man back on top this week in Pro Stock Motorcycle as Jerry Savoie defeated Eddie Krawiec in the finals. Savoie made a 6.744 second, 198.44 mph pass to beat Krawiec’s 6.915 seconds, 196.30 mph. Savoie also got by Scotty Pollacheck, Matt Smith and Karen Stoffer in earlier rounds to make it to the finals. – Toni Montgomery

Short Tracks: Some very close and thrilling touring series championships were decided throughout the country. The NASCAR Whelen Modified Tour title fight was tied up top between former champions Doug Coby and Ryan Preece with Woody Pitkat a mere four points out in third. It was all Coby from the start of the weekend though, turning in the fastest qualifying time and leading a majority of the 150-lap feature as part of the World Series of Speedway Racing at Thompson Speedway Motorsports Park (Conn.). It was Coby’s seventh win of the season and third career title, coming in his first season after switching to a new LFR chassis after the MSIII Racing team’s 2014 championship effort.

Grant Enfinger wasn’t the only driver to capture an ARCA ring over the weekend. Jeff Myers Jr. and Cody Quarrick were separated by only 11 points heading into Sunday’s ARCA Truck Series finale at the minuscule 1/5-mile Lake County Speedway in Ohio. Neither driver led during the 125-lap race, but Quarrick went on a mission toward eventual winner Shawn Szep at the front after a close call earlier in the race with Bobby Dale Earnhardt, grandson of the seven-time NASCAR champion. However, an altercation between the third- and fourth-place drivers moved Myers up a couple positions, which was enough for the teenage Michigan driver to claim his first championship by a narrow margin. – Aaron Creed

Sports Cars: Thiriet by TDS Wins ELMS 4 Hours of Estoril in Changeable Conditions – Seems like wet weather is a constant with recent sports car events. Both main events at Road Atlanta during the Petit Le Mans weekend were run in the wet and much of the WEC 6 Hours of Fuji was run in the wet.

The European Le Mans Series held their season finale at the Autodromo do Estoril in Portugal. The margins were close in the headlining P2 class and the weather ended up playing a big role once again. The race saw rain come and go, followed by bright sunshine. Jota Sport entered the race with the points lead and had an excellent start to the race. Filipe Albuquerque had an excellent first stint and had a 30-second lead when he pitted and gave way to Simon Dolan. Then, the car didn’t want to engage first gear, costing them time.

Early in the race, the heavens opened up, leaving the teams struggling to get around the 2.6-mile road course. Dolan ended up getting caught out on slick tires and spun into the gravel. In the time it took for him to be pulled out, he went from the lead to a lap down. By the end of the race, Jota Sport had climbed back to fourth, but still ended up a lap down and without the championship hardware.

The No. 46 Thiriet by TDS ORECA 05-Nissan shared by Ludovic Badey, Pierre Thiriet and Nicolas Lapierre avoided trouble in the changable conditions and won by over a minute over Greaves Motorsport’s No. 41 entry shared by Gary Hirsch, Jon Lancaster and Bjorn Wirdheim. For Greaves Motorsport, the second-place finish was enough to give them the championship. Marc VDS Racing, competing in their final four-wheeled, claimed the GTE-class victory while LNT won the P3 class with their No. 2 entry shared by Gaetan Paletou and Michael Simpson. Finally, AF Corse won the GTC-class with their No. 63 Ferrari 458 Italia shared by Marco Cioci, Ilya Melnikov and Giorgio Roda. – Phil Allaway