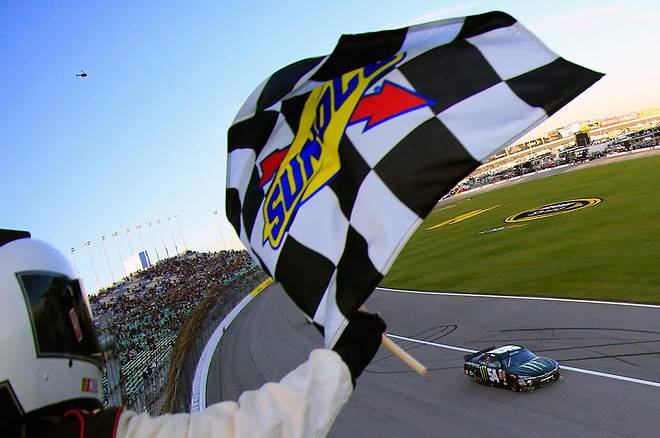 It’s not uncommon to see Kyle Busch win a NASCAR Xfinity Series race, but it’s rare you have to see him fight so hard for it. Joe Gibbs Racing teammate Matt Kenseth started on the pole and was arguably the class of the field, leading 148 of the 200 laps. Busch, however, was the only other driver to lead, and ultimately was able to wrestle the lead away from Kenseth.

“Wrestle” isn’t meant literally, of course, but captures the nature of the fight between the two teammates. With less than 20 laps left, the two drove consistently side-by-side for the lead, with Busch trying a variety of moves to get by Kenseth. He finally cleared the No. 20 car, and even a late-race caution for a blown engine from Joey Gase, couldn’t deter Busch, as he was able to pull away unchallenged with a great restart. This all happened even after an early-race speeding penalty and some nose damage after hitting some debris from another racecar.

Joey Logano took third and spent much of the race in the top five, but ultimately had little to say about who was in Victory Lane. Ty Dillon and Regan Smith rounded out the top five. Chris Buescher gained one point over Chase Elliott, extending his points lead from 26 to 27 following a sixth-place finish. The two finished side-by-side at the checkered, with Elliott settling for seventh. Ryan Sieg, Daniel Suarez and Brendan Gaughan rounded out the top 10.

Smith is third in points, with a 33-point deficit. Dillon remains fourth, 36 points back. Darrell Wallace Jr., Elliott Sadler, Suarez, Gaughan, Brian Scott and Ryan Reed are the remaining drivers in the top 10, though are too far back to realistically pose a challenge to the frontrunners.

JGR’s dominance isn’t just limited the Sprint Cup Series. They tend to be unstoppable in the NXS as well. Busch, Kenseth, and Suarez were almost always in the top five and were oftentimes first-second-third (in varying orders) throughout the course of the race. Despite the fact that Team Penske is usually right behind them, Logano really didn’t pose much of a threat, and the NXS regulars weren’t able to put up the same challenge as we have seen in a few other races this season.

With that said, however, Dillon, Smith and Buescher all finished toward the front, and though they weren’t able to match the speed of the two leaders, were at least able to breath down their necks a few times and keep up for a few laps on restarts.

It feels like we’re grasping at straws here when it comes to giving the NXS drivers their due, but it’s pretty clear that no one legitimately had anything to challenge Kenseth or Busch in Saturday afternoon’s race. With that said, 2015 has been a great year for the NXS regulars, and they made themselves known during the Kansas Lottery 300 despite the fact that none of them were in victory lane.

The final caution of the race really hurt Scott. Scott was in the top-five for most of the race and could have easily finished there. However, the final caution was due to Gase’s blown engine required extensive clean-up and before the No. 2 reached pit road, the car ran out of fuel on the apron. He had to be pushed back to pit road to fill back up, and ultimately finished in the 23rd position, one lap down.

Scott’s championship hopes were already slim to none. However, Scott has over 200 career NXS starts and is still searching for that elusive first victory. He’s had many opportunities this season and continues to run strong week-to-week. With that said, these sorts of “bad luck” scenarios keep happening and sometimes you have to think that, eventually, this team has to make their own luck. Regardless, I don’t think anyone doubts that Scott can win a race. It’s just their ability to close the deal that is causing the issue.

Other than casual fans who watch racing strictly for the wrecks, no one who watches for the love of racing actually wants to see torn-up racecars. Side-by-side action, yes, but there definitely isn’t any desire to see cars being towed back to the garage.

It’s even worse when you see smaller teams sustaining heavy damage. Jennifer Jo Cobb is somewhat of a hometown hero, but runs a small race team where a 20th-place finish would be a good day. A Kansas-native, Kansas Speedway is a big deal for her, a place where she wants nothing more than to have a good finish at her home track.

On lap 146, Cobb got into the wall coming out of turn 4 due to a part failure, then Korbin Forrister rammed into the back of her car, causing large amounts of damage to both vehicles.

This was Forrister’s debut race in the NXS, and he was not with a large team either. Knowing that some of these teams run on blood, sweat and tears more than parts and pieces, it’s a little gut-wrenching to see those sorts of accidents.

With that said, the important thing is that both drivers walked away and will race another day. Hopefully with better luck next time.

I continue to be impressed by Sieg. He consistently runs in the top 15 and has earned some television time this season, despite running with a team that normally doesn’t otherwise earn that kind of attention. He hadn’t been able to earn a top 10 yet this season prior to last Saturday, but it certainly felt like it was a long time coming.

Sieg is the type of driver you feel could do big things if he received the right opportunity. I don’t know when (or if) that will ever come for him, but this race team has proven the ability to do more with less.

The race was about as exciting as could be expected for one driver to dominate… until the end of the race rolled around. It’s hard to have a battle for the lead between two drivers — Cup Series regulars or otherwise — that can beat the side-by-side action that occurred between Kenseth and Busch. One can only hope we see more of that in the future.

In that same regard, it’s also fun to see NXS regulars having a say-so in the race, even if they don’t ultimately win or, yes, even lead a lap. All the same, Dillon, Smith, Buescher and Elliott all had fast racecars and the Sprint Cup Series drivers noticed them. You can add Suarez and Scott to that list, even if their finishes don’t really show it.

The bottom line is that Sprint Cup Series regulars aren’t going away anytime soon, and good racing should be applauded even when it comes from that crop of competitors. Yes it would be nice to come from the series regulars, but they will have their time in the spotlight and certainly put on their own show during the course of the race in Kansas.

“It looked like Matt [Kenseth] was just really loose that last run. Chris Gayle (crew chief) did an awesome job tuning me in and getting my car really, really good that last run. I couldn’t ask for it to be any better. I think our balance overcame them and was able to put us in victory lane. Can’t say enough about everyone from Monster Energy and Toyota, this Toyota Camry was fast today. I thank the Xfinity bunch of guys to put on our show that we enjoy on Saturdays and of course the fans for coming out and supporting us too. This was a good day for us and something to kind of build off of hopefully and see what we can do tomorrow.” – Kyle Busch, race winner

“It was an eventful day. I’ve got a couple things I’ve got to clean up on my end. The pit road speeding penalty was not helping anything, so trying to make up that and then stalled it once leaving pit road and those are things I’ve got to do better with, but the guys did a nice job. The car was pretty good all day. We were a top-five car and just had to use up a lot to try and get back up there, and was not looking for that last yellow. That last restart we got a good start and got down in the corner, but just got real tight behind the [No.] 3, so didn’t end up exactly where we wanted, but, overall, it was a good day for us. It was a good points day, as much as I hate to just talk about points days, but it’s the best run we’ve had here at Kansas and best mile-and-a-half we’ve had in a while, so I’m glad our program is getting better there.” – Chris Buescher, finished sixth

“We were really bad. I don’t think there’s any way to put it any better than that. We were a seventh or eighth-place car and that was it. We never had any speed, so taking a third-place out of today is what we’ve got to do. That’s good for the owners’ championship. We’ve got a nice cushion and we need to continue keeping a decent-sized cushion like we did today. We lost a little bit. We gained some on the [No.] 60 and lost some on the [No.] 54, but overall that’s what we had to do. We really just want to win. We raced really hard and restarted there sixth at the end. I was able to get three real quick, but that was kind of it.” – Joey Logano, finished third

“We can’t seem to keep the car off the splitter. We have a really hard time with that and when you’ve got to go on restarts and you’re killing the splitter, you just can’t go anywhere. You’re really just in the way and I was just in the way. It’s a shame. I did not want to see that caution come out. I knew we were gonna be in big, big trouble with a restart. It’s just not the finish we wanted today.” – Elliott Sadler, finished 12th

The Xfinity Series is off the next two weeks and returns on November 7th for the O’Reilly Auto Parts Challenge at Texas Motor Speedway. Coverage begins at 3:30 p.m. ET on NBC.

Promoted to editor in 2013, Summer is one of Frontstretch’s fast-rising young talents. While contributing to social media efforts, she also writes the weekly "Up To Speed" column. A Kansas native, Summer graduated with a Bachelor's in Journalism and Mass Communications in 2015. She also contributes to other media outlets such as Kickin' The Tires.
Previous Frontstretch Fantasy Insider: 2015 Hollywood Casino 400 at Kansas
Next Hometown Driver Jennifer Jo Cobb Sees Early End to 2015 Kansas Lottery 300