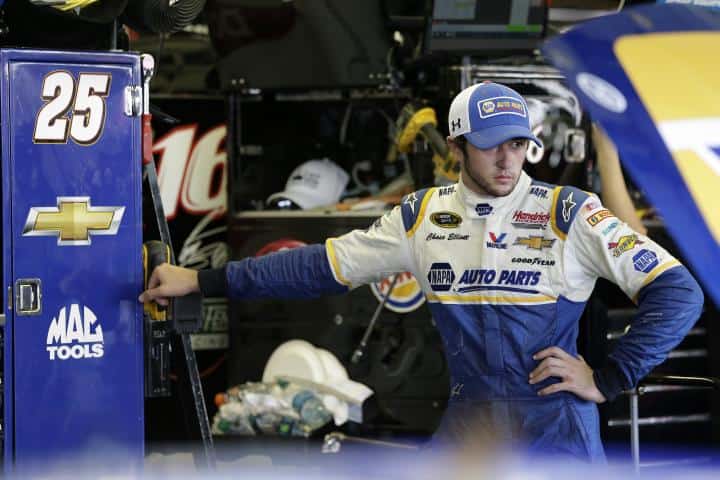 As Jeff Gordon’s farewell tour begins begins to come to a close, anticipation for his successor is building.

“I think the car turned out great. I hope everybody likes it,” said Elliott to FOX Sports. “They were really open and willing to do some of the ideas that we had.”

Elliott, son of Sprint Cup champion Bill Elliott, has competed full-time in the NASCAR Xfinity Series for the previous two season, earning the 2014 championship in his rookie year. The Dawsonville, Georgia native made five NSCS starts this season in the HMS No. 25, scoring a best finish of 16th at Richmond as he gained experience with the machine.

Following the unveil, Elliott and Hendrick took the time to answer questions, including a confirmation that current No. 24 crew chief Alan Gustafson will stay atop the box for Elliott.

“Absolutely,” said Hendrick when asked if Gustafson will stay with the team. “Alan is such a great person and a great crew chief. He’s grown up in the organization just like the rest of our guys.”

Hendrick also took the time to praise his new driver, while acknowledging the shoes he had to fill.

“We’re so excited about Chase,” said Hendrick. “I’m gonna hate to go to Daytona and not see Jeff Gordon’s name on the roof of one of our cars, but I’m so excited.

“What he did in the Xfinity Series last year in winning the championship, and what we’ve seen out of him when he gets in the Cup cars now. I can’t wait to see him take it on next year, and I think he’s got a real shot of being in the Chase.”

While transitioning from the Gordon to Elliott might be difficult for fans, Elliott confirmed that it’s been strange for him too.

“It may be weird for other people, but it’s definitely weird for me,” said Elliott. “Just to have a chance to go do something that you’ve wanted to do since you were a little kid, for me, is special. I think loading this thing up to get ready to go to the [Daytona] 500 next February is going to be quite the feeling.”

Elliott will debut in the No. 24 Chevrolet next February wen preparations begin for the Daytona 500. The rookie will be the first driver outside of Gordon to compete in the machine since the four-time champion made his NSCS debut in 1992.