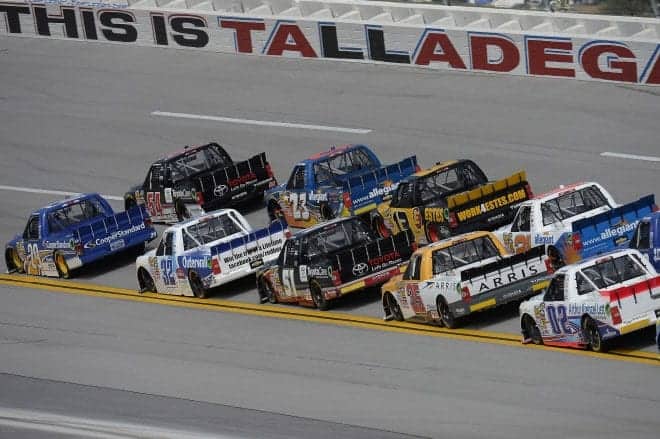 After nearly a month off, the NASCAR Camping World Truck Series returns at the most unpredictable track on the circuit.

No Sprint Cup Series regulars will attempt the 250-mile event. In their place, young prospects and family ties will fill the few open seats on the grid.

Brian Keselowski will make his NCWTS debut in the event, piloting brother Brad Keselowski’s No. 29 Cooper Standard Ford. The elder Keselowski was awarded the ride in place of Austin Theriault, who is recovering from a violent crash sustained in the previous race at Las Vegas.

The Truck Series will roar to life on the 2.5-mile Talladega Superspeedway on Friday, Oct. 23, for two practice sessions at 1 p.m. ET and 3 p.m. ET, respectively. The field will then return on Saturday for Keystone Light Pole Qualifying at 10:30 a.m. Coverage of the Fred’s 250 will begin at 1 p.m. ET on FOX.

It’s called Fred’s 250 because Fred is the only one that bought a ticket so far!