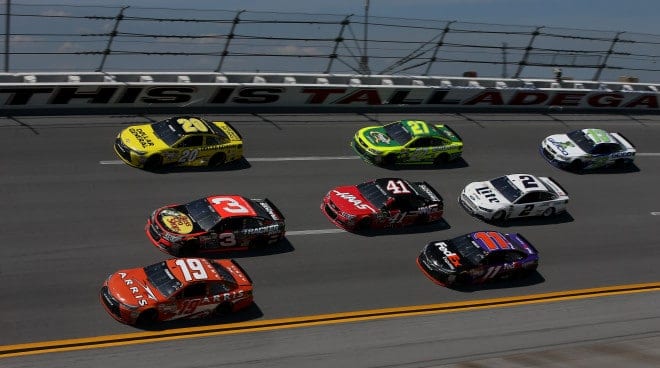 We’re all set up for a nail biting, edge of your seat type Sunday afternoon on the treacherous high banks of Talladega Superspeedway. Rightly or wrongly, and there are many that think the latter, the final eight drivers in the Chase will be decided by 500 miles of inches apart racing at 200 mph-plus where your fate is very definitely not your own. Outside of Joey Logano, who has won the last two straight races, none of the remaining 11 Chase drivers will sleep well on Saturday night as they await the vagaries of the fourth and final plate race of the season. Dale Earnhardt Jr. (-31 points from safety) and Matt Kenseth (-35 points) are the two drivers in the most trouble but the simple fact is both can win this weekend and that, folks, would change the picture completely. Earnhardt has been dominant at restrictor-plate tracks of late and he will be confident heading into a track where he knows only a win will do. Likewise Kenseth, more on him below, is very much a threat to take the checkered flag and he will be burning to do so after a tough finish to the Kansas race weekend. Denny Hamlin, who is 18 points up from the cutoff line in second place, isn’t safe either, so if there is one thing we can guarantee this weekend it’s that anything can happen. Looking forward to a great – and most importantly – a safe race.

There are always two sides to every story and never is that more true with a controversial on-track racing incident such as we saw at Kansas Speedway this past weekend. Fans of Logano would argue that their driver was racing hard for a win; Kenseth had been blocking for several laps, so why shouldn’t the Team Penske racer make the most of his opportunity? It could also be argued that Logano knew full well the significance of Kenseth not winning the race and took his opportunity to make sure that didn’t happen with all the ramifications that come from that. “That’s good, hard racing,” said Logano in an NBC Sports post-race interview. “We were racing each other really hard. I felt like I got fenced twice. He raced me hard, so I raced him back.” Unsurprisingly, Kenseth’s point of view was diametrically opposed. “I’m really disappointed, I was running the lane he wanted to run in, but my goodness, isn’t this racing?” said Kenseth post-race. “Strategically, I think it wasn’t the smartest move on his part. He’ll probably sleep good tonight. I hope he enjoys that one. It’s not what I would have done.” And therein lies the difference between the two protagonists in this particular tiff. The real question now is whether there will be any repercussions.

Arguably the biggest news of the last seven days – spinning for wins notwithstanding – was the word from NASCAR on next season’s rules package. “The success of the races at Kentucky and Darlington in similar trim proved extremely valuable in accelerating rules development for 2016,” said Steve O’Donnell, NASCAR executive vice president and chief racing development officer in an official NASCAR release. “Now, as teams have even more time to prepare and a strong baseline of data, we anticipate the racing to be even better.” Amen, amen, amen is what I have to say about that and I truly hope it proves to be the case for the full season. This is a huge deal for the sport as a whole. Sunday’s race, for example, might have looked very different as Logano would likely not have needed to spin Kenseth to win the race – as the faster car he should have been able to make a clean pass. More than anything this package gives fans hope. Headed into this past weekend the smattering of fans I spoke to were not excited (knowing the aero issues so prevalent at mile-and-a-half circuits. Next year should be different. It’s just a shame it wasn’t the case for this year’s Chase.

FOUR: The clock is ticking for Gordon

Time is fast running out on Jeff Gordon’s NASCAR career with just five races remaining for the sure-fire first-ballot Hall of Famer to see out his illustrious career. As things stand, Gordon sits seventh in points, seven above the cutoff line. On a regular weekend that might be a good enough cushion, but at Talladega, where disaster lurks around every turn, it means precious little. “I’m real confident in our racecars and our race team,” said Gordon of his Talladega chances in a FOX Sports interview. “I’m excited about our chances at actually winning there. I just don’t like the chances of being in a wreck because they are usually high, but we are going to go and approach it where we are going to be aggressive and race hard. We will just see where the points end up.” Ironic, then, that a 24-year, 792-race career comes down to one 500-mile tilt around the baddest track of them all.” Here’s hoping for a great race for Gordon and a safe race for all concerned. That, at a venue like ‘Dega, is what matters the most.

Back in August, Kurt Busch spoke of a handshake deal to stay in the No. 41 Stewart-Haas Racing Chevy beyond this season likely with Monster Energy in tow as a primary sponsor. And on Wednesday it looks like that will finally be made official. Busch is still in contention for a title and has had two solid weeks in round two of the Chase, finishing fifth at Charlotte Motor Speedway and sixth at Kansas Speedway. Good finishes aside, like Gordon and the rest of the Chasers not called Logano; Busch will have to race his way into the next round at Talladega. “I feel like I’ve got a stronger car than when I won the championship,” said Busch in an interview during the Kansas race weekend. Provided he can navigate his way through 500 of the trickiest miles in NASCAR, he will have a solid shot at adding a second title – his first coming in the first year of the Chase back in 2004. And if he did, what a turnaround it would be.

Well, it really seems obvious the Saint Matt crowd and Matt wanted Joey to not race him, because of this stupid Chase. Logano’s as well as Matt’s obligations are not to make a competitor feel good, safe and warm. But to do what they are paid to do. Win races. If Logano rolled didn’t fight for the win, who would respect him? Most ignorant would have him roll for Kenseth. The logic some have is scary. There is one idiot on the Nascar website that kept saying “Logano didn’t “NEED” that win. SMH. I am afraid.

To paraphrase “I do think at a certain point you’ve won enough races”. Socialism comes to NASCAR?

The way it’s going and with some of the fan base thinking..it would not surprise.

Here’s a point to ponder. The Kansas race drew a 2.2 TV rating up from last year’s 2.0 and down from 2013’s 2.3. It was the lowest Chase race viewership to date. The Xfinity races hover around 0.who cares and next week’s truck race will probably not be broadcast at all in some markets. Anyway, here is the point to ponder. Television revenue is probably is the only thing that keeps NASCAR solvent at this point. What will it take for NASCAR to accept that there are serious problems with the product that insignificant weekly rules tinkering and silly gimmicks are unlikely to fix?