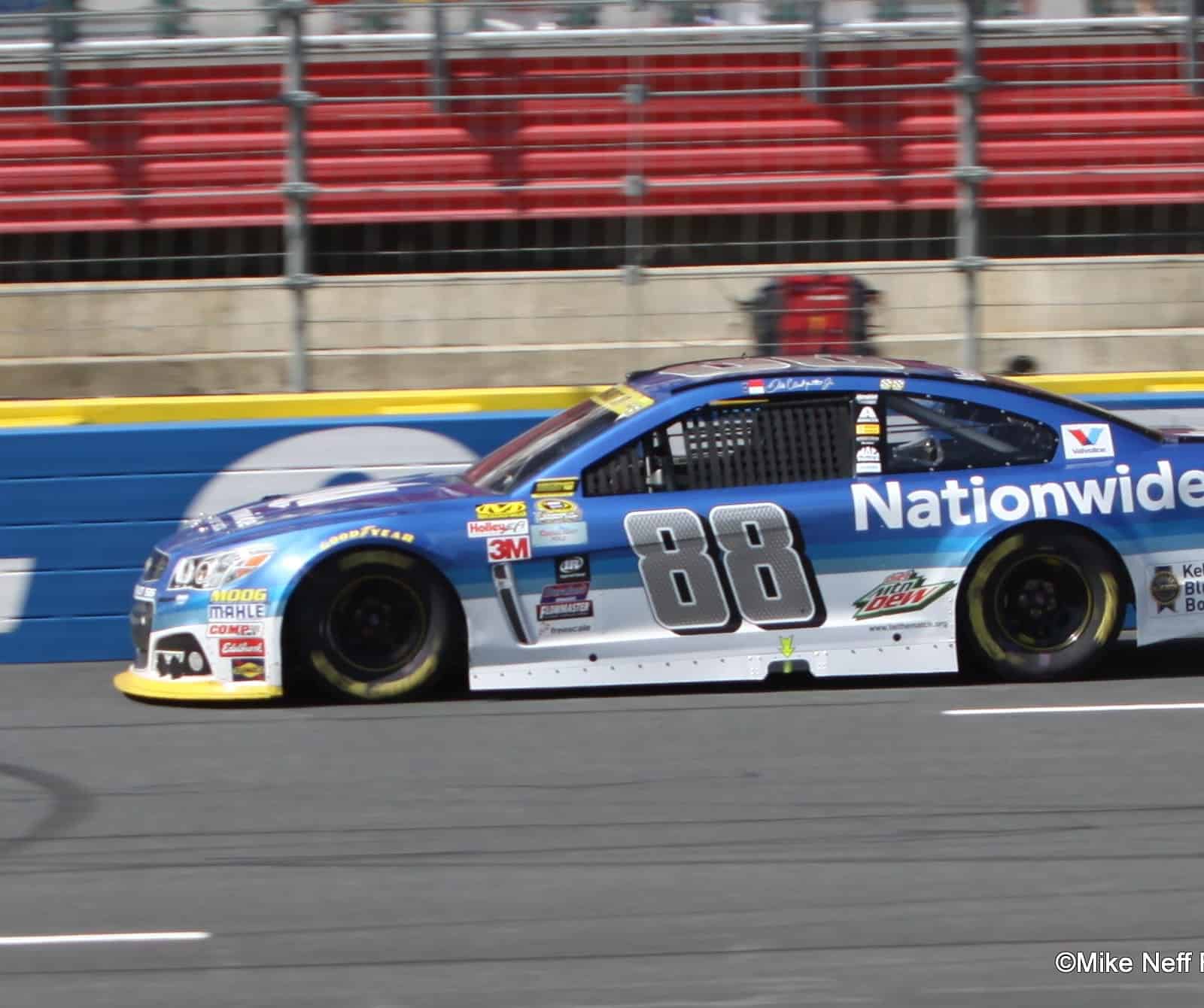 Hendrick Motorsports is still considered the New York Yankees of Sprint Cup. With 11 total championships, a record five in a row by Jimmie Johnson and 237 career victories on the Cup circuit they are unquestioned leaders in modern NASCAR performance. Even during their down years, the team has come up big for Stewart-Haas Racing, providing engine and chassis combinations that won titles for Tony Stewart (2011) and Kevin Harvick last year. Half the circuit would kill to have the situation HMS has right now: four fully-sponsored cars over the long-term, seven wins this season and two drivers still championship eligible heading to Talladega. Jeff Gordon, a dominant driver last November at Homestead could easily do it again this time around, holding up the title trophy as the perfect bookend to a Hall of Fame career that built this HMS dynasty.

But here’s the problem with a team this big; better results lead to higher expectations. The Yankees, over in Major League Baseball have gone six years without a World Series victory. In the “big picture” of their own record-setting history they’re a struggling franchise.

Why does it feel Hendrick is suddenly leaning the same way?

Its core team, once on autopilot to the point it finished 1-2-3 in the title Chase the last time the Yanks won the series (’09) now has no chance to even go 1-2. Both of its two title-eligible drivers remaining have struggled during the Chase; each could easily be eliminated this Sunday, leaving HMS outside the “final eight” drivers in the second year of NASCAR’s new playoff format. Last year, despite qualifying all four drivers into the field they left Talladega with only one remaining; Gordon then failed to make the Homestead Final Four after the infamous contact with Brad Keselowski at Texas.

Dale Earnhardt Jr., struggling through this playoff, needed a banzai move at Dover just to make the current field of 12. A loose wheel at Kansas combined with a poor Charlotte performance means its “win or else” at ‘Dega, a track where each of the 43 drivers are created equal. Despite Earnhardt’s drafting prowess – he’s won six times at that track, including this spring – there’s little he can do should a “Big One” unfold directly in front of the No. 88 car.

Gordon, meanwhile has clunked through a final season that’s seen a major downturn in performance. He has just three top-five finishes, none in the Chase and has led just 48 laps since the last time the circuit visited ‘Dega in the spring. A streak of six straight top 15s – most with a junk car Gordon had to salvage over the final 100 miles – has left him in position to potentially advance if a little plate racing luck goes his way. The problem is Gordon’s been 33rd, 31st and sixth at Daytona and Talladega this year despite showing strong speed; getting snakebit once again would end his title chances earlier than anyone expected back in February.

Gordon’s shop, paired with Kasey Kahne is undergoing a transition with rookie Chase Elliott coming on board next year. HMS is high on Elliott, son of Million Dollar Bill who many think will become the next Gordon himself. It’s true Elliott is the Xfinity Series reigning champion and he’ll have every advisor, sponsor, and advantage given to him within the organization to achieve success. That said, he failed to earn a top-15 finish in five Cup starts this season. There’s no guarantee, despite the famous last name he’ll be a “sure thing” along the lines of Gordon and Johnson.

Kahne, meanwhile has missed the Chase on the heels of a contract extension. Beloved within the HMS walls he’s hit too many actual walls on-track; he crashed out three times including simply losing it on his own at Pocono in August. That wreck, combined with a 42nd at Watkins Glen the following week knocked the No. 5 right out of the 16-driver Chase. To not make that field considering the resources HMS has is incredibly disappointing; a first-year pairing of Kahne and crew chief Keith Rodden has produced inconsistent results. Will Kahne, a new father turn around and work well with a new rookie half his age? The Nos. 5/24 shop needs to gel in much the same way as the Nos. 48/88 once did when that duo dominated the Cup circuit at times over the last two seasons.

That brings us to the most dominant driver Hendrick has, of course in six-time champion Johnson, an unquestioned leader of HMS for the past decade. His Dover part failure last month was one of the most shocking moments in Chase history considering the way Johnson has dominated the Monster Mile; he needed the perfect catastrophe in order not to advance to the round of 12. A $5 part is what stood between Johnson and potentially being a serious contender down the stretch; it’s not like the No. 48 was running that bad, evidenced by his third-place run at Kansas. But the reality now is that Johnson has gone two years without a title, again and has just one within the last five years. Turning 40 this season, Johnson sits just four years behind Gordon’s retirement age of 44. The surge of 20-something Joey Logano into contention along with Kyle Larson a year or two away means the window of opportunity for Johnson to earn eight titles is closing. We’ve seen in other sports (take Tiger Woods in golf) how quickly those opportunities can slip away. Johnson and crew chief Chad Knaus, recently signed to extensions that will keep that duo together at least through 2017 need to make the most of their next two seasons.

That year is also when Earnhardt’s contract expires; you wonder if NASCAR’s Most Popular Driver, by then in his 18th full-time season would be close to calling it quits. On his way to marriage, Earnhardt has been open to starting a family and may be looking at changing priorities. But if HMS is worried about losing its top stars, they sure aren’t showing it; the development arm of the company, neatly disguised as JR Motorsports in the NXS is employing either young drivers bringing sponsorship or retread Cup veterans like Regan Smith or Elliott Sadler. Behind Elliott there is no Erik Jones, say in the pipeline; young Cole Custer will be headed to his father Joe’s connection at SHR someday.

Teams like the Yankees always find ways to pick themselves up by the bootstraps and get their act together; Hendrick will doubtless do the same. Long-term sponsor contracts in an era where money is fizzling give them an edge above most other rivals. But for the first time in years, you can look at other organizations like Team Penske, Joe Gibbs Racing and even Hendrick “B” team SHR and see they might be better positioned for the long-term. If Hendrick doesn’t do something to tweak their current scenario those visions will become reality.

BOWLES AT ATHLON SPORTS: Will Matt Kenseth Tip The Scales On NASCAR’s Championship?

No dynasty lasts forever. And there are factors beyond size, talent and money that determine success especially in the current format of chase elimination, double file restarts and fake cautions (i.e. crapshoot rules).

HMS was lucky to have two dynasties in a row with Gordon/Evernham and Johnson/Knauss but I am going to guess that dynasties are going to be much harder for any team to accomplish in the future. With the new championship package because the luck factor has been ramped up and the performance factor has been lessened (by default because luck and performance are independent forces unrelated to each other and luck can always overcome performance). Unless something radically changes with the current rules the probability of seeing anything like that again will be much less.

RE: “Both of its two title-eligible drivers remaining have struggled during the Chase; each could easily be eliminated this Sunday, leaving HMS outside the “final eight” drivers in both years of NASCAR’s new playoff format.”
I believe Jeff Gordon made the final 8 last year so you may want to fix that sentence.

The House of Horrors is the format to determine a champion. This year more than last is showing the dark uglies of this folly. It sounds like the out of touch Brian France is pleased as punch with it. So very sad that the head of this once great sport is so out of touch with the reality of the fan experience and the racing itself. Counting his money is all he seems to car about.

I think the “tapered spacer” hurt Hendrick big this year. They had a clear horsepower advantage last year. The 2015 package favors Gibbs and Penske with all their Xfinity success.

If Dale does not win this weekend, well you can call me shocked ahead of time.

me too…..and if he does win this weekend, wonder if car will be torn up in celebration of the win so much that post-race tech might become a non-issue?

Copy that. That was the first thing I thought when I saw Joonyer’s “points” position after Kansas. He’ll get the lucky draw of the plate and all will be well. Ugh!

Thanks so much for tipping us off! That was a total goof on my part missed while proofing; I’ve fixed the error.

Next year a during a “competition caution” a round of musical chairs will be had at the lame track Homestead. The last guy sitting will be the season long “Champ”.