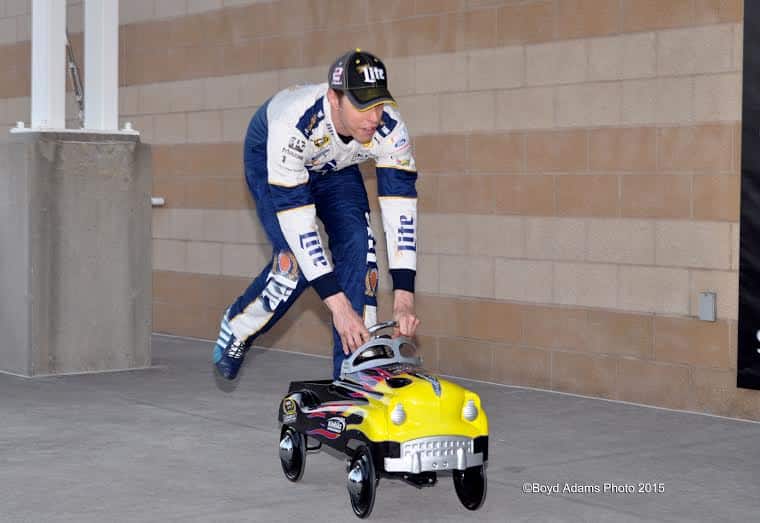 Keelan Harvick, the son of Sprint Cup Series driver Kevin Harvick, is probably going nuts right now. Harvick recently purchased the little guy a slide and posted this photo of Keelan having fun! We wish we could get our own slide, too!

Austin Dillon was one happy driver after the Seahawks vs. Panthers game over the weekend. The Panthers beat the Seahawks and now sit undefeated at 5-0. It also seems that everyone in the Dillon household are huge Panther fans.

Well this should make Talladega a ? pot full of fun… I'm going to bring two bottles of pepto. ??

Joey Logano captured two consecutive Sprint Cup Series victories and will put even more pressure as the series heads into the final race in the contender round. Talladega could shake up the standings for the good drivers and teams as they look to advance into round three. DeLana Harvick shared her nervousness going into the weekend with this tweet.

Two in a row. Literally. pic.twitter.com/FcLdTS8ZoD

NASCAR Wonka also had some fun with the No. 22 Shell/Pennzoil car winning two consecutive races in a row. NASCAR Wonka shared this photo that pretty much sums up the entire last two races on the Sprint Cup Series schedule. Can Logano make it three for three this weekend? We’ll find out!

NASCARCasm has an idea where all of the oil came from when drivers reported the substance on the track. NASCARCasm blamed the incident on Tin Man in the well-known movie The Wizard of Oz. We’re pretty sure that is not where the oil actually came from.

Kasey Kahne and LiftMaster presented a check for $15,000 dollars to the National Fallen Firefighters Foundation. LiftMaster, a maker of garage door openers, is a huge supporter of the firefighting industry. This shows that race car drivers and even sponsors are into helping everyone they can!

Brad Keselowski captured the pole on Friday at the Kansas Speedway when qualifying ended. Kansas Speedway, no matter which series it is for, has a tradition of giving the pole winner a pedal car. Keselowski’s daughter, Scarlett, is pictured here sitting in that car. This photo shows that NASCAR is one of the biggest family sports around.

Perhaps the line of the year, @Reid_Spencer quips. "We're going to be here for awhile with 14 million laps to go." pic.twitter.com/IlBAE2zGaD

Matt Weaver shared this photo on Twitter right at the beginning of the ARCA Racing Series presented by Menards race at the Kansas Speedway on Friday. The timing and scoring monitor showed there were 14,616,989 laps remaining. Everyone would be lucky if this race ended 35 years from now.

Jeff Gordon offered his congratulations to Kasey Kahne on the birth of their son last Tuesday. Kahne became the newest father in the world of NASCAR and will now have a teammate to gain fatherhood advice from. Let’s hope the two have an open dialog book!

Go @Cubs!!!!! #chicagopride this hat is circa 2005 when I threw a first pitch! And sang? pic.twitter.com/oL4DEHFKpQ

Danica Patrick shared this photo of herself wearing a Chicago Cubs hat last Tuesday. The Chicago Cubs returned to the post-season for the first time since 2008. Patrick, a native from Chicago, must be very excited for the team moving onto the NLCS.

That baby is already showing signs of affluenza. Leave those damn babies at home.

Just saw the picture of Danica, first time I’ve seen her this year, is she OK? She doesn’t look OK.

And I’m supposed to care about this why?