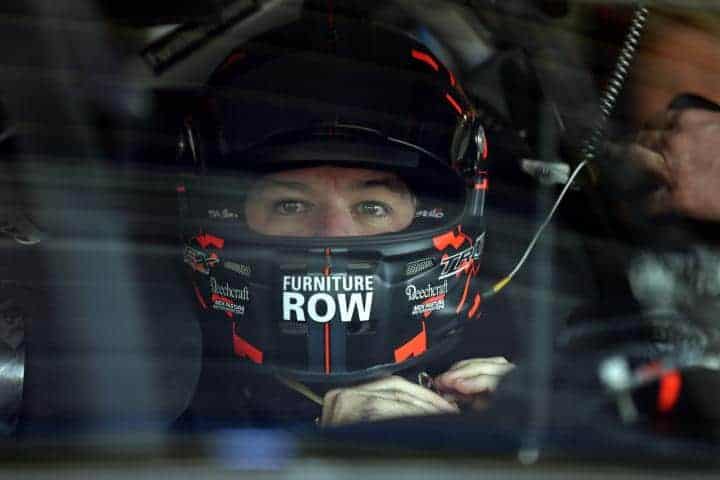 There could be quite a long list of drivers on the cold part of this column, but there is one unmistakable driver who belongs on the hot list, whether you like his tactics or not. But one thing every NASCAR fan can agree on is that with the points being so close and with a win meaning so much, Talladega may well be even more wild than normal on Sunday afternoon.

Joey Logano was by no means dominant on Sunday in Kansas but he was very good at the right time of the race. Logano may have well not just kept Matt Kenseth from a win, but he also may have kept Kenseth from advancing to the third round of the Chase. Kenseth, due to issues at Charlotte, put himself in a win or be eliminated situation. So, with the laps winding down and Logano all over his bumper, Kenseth was doing all he could to keep Logano from passing him. This may well have been a case where both drivers were right. Kenseth had to do everything possible to win, and that meant blocking Logano. Logano wasn’t going to let an opportunity to win a race just go by the wayside either, so when Kenseth pulled down to block again, Logano didn’t let off the gas. Kenseth can say what he wants, but he has not been above a bump and run win in his day. Logano has shown in his young career that he is not afraid to bump his way to a win either, so Kenseth had to know the risk he was taking by blocking the No. 22. But it was the only chance Kenseth had to win this one. Now, Logano is the only Chase driver who can go into Talladega worry free as he has back to back wins.

It’s tough to say that Denny Hamlin really belongs in this category, but he is the one other driver that won’t have to be completely desperate at Talladega. Hamlin didn’t lead any laps Sunday and in fact wasn’t happy with his car for much of the day, but he ended with a second place at Kansas. As a result, he does have an 18-point cushion on ninth place heading into Talladega. So, while there may be no such thing as a security blanket for any Chase driver not named Logano, Hamlin at least does have a bit of breathing room and maybe he won’t have to make any risky moves on the restrictor-plate track.

Ryan Blaney is not in the Chase and wasn’t even eligible for the Sprint Cup championship this year. And while there has been plenty of fanfare about Chase Elliott graduating to run the Cup series full time next year, it’s not crazy to suggest that Blaney may actually be the more talented driver. This is not a knock on Elliott in any way, but Blaney, running a partial schedule in the No. 21 Wood Brothers Ford this year, has two top-10 finishes in 13 starts this year after finishing seventh on Sunday. And, Blaney also is a willing autograph signer at pre-race events, so you know, that makes him a pretty easy guy to cheer for right now, as well as in the future, too.

It’s true the Chase points system is not going away anytime soon, like it or not, and here is one reason why. With the next elimination race scheduled for Sunday, there are eight drivers within 15 points of each other and only six of those drivers (or maybe just five) will advance to the next round. So, even if this next race was not at Talladega, there would be plenty of drama about who would or would not have a good chance to make it to the next round. Under the old pre-Chase points system, the only drivers with a chance to win the title would be Logano or Kevin Harvick. And well, you could say they have earned that right. But let’s face it, the fact there are so many more drivers involved in this scenario gives a lot more people reason to stay interested and that’s not all bad.

Both Martin Truex Jr. and Harvick, who were likely not going to win Sunday, were still running strong and had realistic chances of finishing in the top five before they each experienced troubles on pit stops late in the race. Harvick’s gas can fell out and Truex’s crew let a tire roll out of the pit box. The result was they each basically lost one lap and instead of having just a bit of a points cushion heading into Talladega, they are each in the nail-biter section now. Harvick has a seven-point cushion over ninth-place Kyle Busch and Truex has a six-point cushion. Just a reminder that it all matters, whether it’s on track or on pit road.

If the next race in the schedule were anywhere except Talladega or Daytona, you would probably say that Dale Earnhardt Jr.’s chance of making the Chase would be all but gone. After finishing 21st on Sunday, he sits 31 points behind the eighth-place Truex. But Junior is certainly famous for and capable of winning at Talladega under any circumstance. We all know things can be wild at Talladega and wouldn’t it be wild if Junior raced his way to the next round with a win?

I’m not a Busch hater, Kenseth hater or Logano hater. But when all or one of those drivers are competing in the Xfinity Series race, well, it just gets tough to watch sometimes. Once you see the No. 54 of Busch out front, barring some type of mechanical failure or accident, the race is pretty much over. It would be nice at least every now and then to see the NXS regular battle for the win amongst themselves. The way it is now, there is really no suspense at all and it leaves me wondering what the real purpose of this series is.

The two super sophomores this year were supposed to be Kyle Larson and Austin Dillon. And while we have seen a little glimpse of potential this year, they’ve both basically been big disappointments. Dillon actually ran well Sunday when an accident took him out and he ended up with a 41st-place finish. Larson’s car was so loose at one point it looked like he was driving on one of those Midwest dirt tracks in a USAC sprint-car race rather than a NASCAR Sprint Cup race. Maybe this will go down as a learning year for each of them and they will be much better next year. But after this season, that’s far from a guarantee.