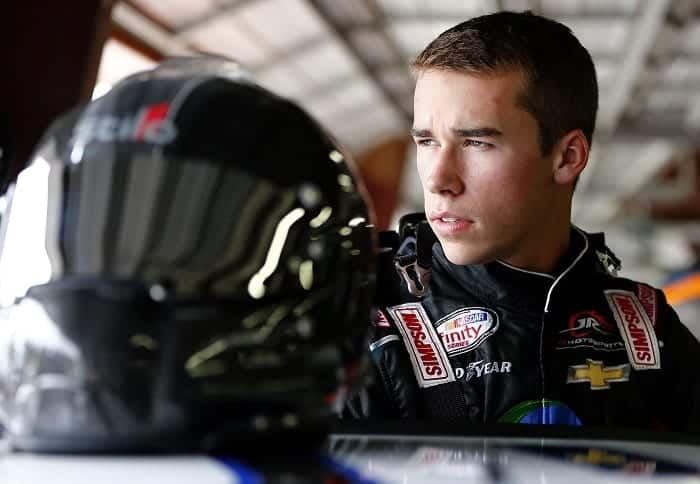 Ben Rhodes stood in his hauler at Dover International Speedway with a wry smile during a rainy day. The outside of his hauler was met with large puddles, each of which expanded near a set of tires. The 18-year-old was sitting on his laptop, staring at pictures of classic cars, something he loves to do.

For this young man, cars are his life. Racing has taken the priority over college. As soon as he graduated high school in 2014, Rhodes shifted his focus primarily to his career. He had spent much of his high school life outside of the classroom, studying on airplanes and doing homework at the racetrack after a long day.

When JR Motorsports – the team Rhodes signed a 10-race deal with in the Xfinity Series prior to the 2015 season – announced that two-time winner this year, Regan Smith, would not be returning, it appeared that the young man could be his successor. However, that is not the case.

“I don’t have a plan for next year yet,” Rhodes told Frontstretch at Dover International Speedway earlier this month. “It’s crazy because in the business world, you want to have everything set in stone as soon as possible. In racing, all of the hottest stuff goes through at the last minute because it is such a crazy, hectic sport. Towards the end of the season is when I think we’ll have our plans set. I would definitely like it to be sooner rather than later. I know that is not going to be the case. We’re just going to keep working as hard as we can in the meantime.”

The uncertainty of Rhodes’s future is an uncomfortable one. It is one that is concerning considering he dominated the K&N Pro Series East in 2014, winning five races en route to the title at just 17 years old.

When the opportunity came about to race in the Xfinity Series with the organization that won the 2014 championship with Chase Elliott, it was one that Rhodes could not pass up. He started out his NXS career by earning a seventh-place finish at Iowa Speedway in May, taking advantage of a late-race strategy call by crew chief David Elenz after running approximately 13th throughout the 250-lap race.

But after that, inconsistency has plagued the young man on the racetrack.

“The transition has been up and down for me,” Rhodes said. “I think that we have great speed and I am definitely learning a lot, but there is a lot of adversity that we are overcoming at the same time. I think if I had more experience to pull on, then it wouldn’t be such an issue. But I’m learning, and that is the main thing.

“I would say the biggest struggle would have to be having to get in and out of the car and the lack of seat time that I have. When I am in the car for one week and then out of it for a month and a half, it is hard to be on the same page as everyone. I try to go to the race weekends with the team whenever I am not racing to keep the communication and that relationship going. But when I get back in the car, it is very hard to get readjusted.”

With the guarantee of getting his feet wet in the NXS, Rhodes appeared to be poised for a stellar 10 races with JRM. His sponsor, Alpha Energy Solutions, agreed to join him on his latest venture, investing in the brand that Rhodes had created with Turner Scott Motorsports in the K&N Pro Series East.

However, through nine races, his lone top 10 outside of his debut came at Mid-Ohio, where he finished 10th. He has three DNFs and has finished on the lead lap in three of those nine contests. A pole award at Road America has been a highlight to his roller-coaster season, but with his next and final start for JRM coming next month at Homestead-Miami Speedway, there is a glimmer of hope to impress future sponsors.

“It is something that I have worked toward my whole life,” Rhodes explained. “Once you get in so deep, you keep going. My family and I made a lot of sacrifices when I was little to get to the next level and the next level after that. After you make so many sacrifices, it just builds on each other. When you put so much into it, you have to keep going and see where you get. I have a lot of support behind me, so it doesn’t make it too hard.”

He might have been able to leave an impression on a few owners in his limited track time this year. An average finish of 21.1 has not been indicative of his strengths on the track. His precision behind the wheel has been showcased this year, but over-driving the car – a mistake that Dylan Kwasniewski made in 2014 and many others before him – has hurt his results.

“I think I put more pressure on myself at the beginning of the season, when everything was starting to take place,” Rhodes said. “As the season has gone on, my worst finishes were at Road America and Kentucky Speedway, but I put less pressure on myself. Those were races where I was really trying to take pressure off and trying not to get in trouble, especially at Kentucky. But trouble found us.

“It is interesting because this is a track that I didn’t do very well at, but I felt the most comfortable at Kentucky Speedway, actually. I think that is a combination of me being there all the time. I used to race Legend cars there all the time. I know the track like the back of my hand. On the track itself, I was very comfortable because it is a very wide-open racetrack and we had good speed, but the race just didn’t show it.”

The lack of track time did not play in Rhodes’s favor, and he openly admitted that. Following a 13th-place finish at Dover, which featured an early-race spin on the frontstretch, he admitted to being too aggressive. A lack of track time that weekend and in general has created a giant bruise into his learning experience.

But now, Rhodes is looking at the future. It would be tough to climb through the rankings with the organization he is with now; after all, JRM has an alliance with Cup Series juggernaut Hendrick Motorsports. With Elliott replacing Jeff Gordon starting next season in the No. 24 car and a four-car limit set by NASCAR, the only way Rhodes could insert himself into the team’s stable would be signing a multi-million dollar sponsor. In this era, that is quite tough. Is it doable, though? Yes, just ask Elliott and NAPA.

Hendrick’s stable is packed to the brim. Kasey Kahne is signed until 2018. Dale Earnhardt Jr. is on board until 2018. Jimmie Johnson recently signed an extension through 2017. Elliott certainly is not going anywhere anytime soon. Thus, there is no option for Rhodes if he were to stay at the team. Even if he were to stay, he could not go over to Stewart-Haas Racing once his development in the NXS is completed, which has an alliance with Hendrick, since the team’s driver lineup is set for at least the next few years.

“To stay in the sport, you need to have a lot of sponsorship behind you,” Rhodes said. “I’m doing that by working my way around Louisville, where I’m from. In Louisville, there are only a couple of racecar drivers and I’m the only NASCAR driver in Kentucky. It makes it a lot easier to market.

As Rhodes has begun to evaluate his options for the future, it is increasingly important for him to not only find a team willing to give him a full-time ride for a season, but also one that will set a secure path for his career. Following in the footsteps of Elliott, Chris Buescher, Ty Dillon and the other young guns in the NXS, he will need to align himself with a championship caliber team.

The rookie mistakes have come. They might be there next year no matter where he lands. However, the more reps that Rhodes has behind the wheel, the better he will become. Teams will be able to evaluate him based on his results, not how he ran before he either wrecked on his own or got caught up in someone else’s mess.

In a division dominated by Cup stars, Rhodes could earn the chance to win given the right equipment. Finding the right fit will be the key. Does he take a ride in the Camping World Truck Series, where he had four starts as a 17-year-old, earning three top 10s in four starts, or does he aim to go full-time in the NXS?

“Obviously, the results this year haven’t shown that I am ready. I feel like I am ready. If I am not given the chance, how will we ever know? If I keep doing part-time, I am going to learn at a very slow pace. If I go full-time and get to race every week, I think that will prove that I am ready.”

“Gil has been in this role before with RCR and we are confident he will do as solid a job as he did before,” Dr. Eric Warren, director of competition for RCR said in a team release. “Gil has a tradition of success with this team and his leadership role with our Xfinity Series program will make our four teams even stronger.”

i understand sponsors wanting return on their investment, but i we don’t have young talent working their way through the ranks, and just keep having cuppers moonlight in xfinity series, then both series are going to be lacking for drivers.

just think if hendrick, while watching gordon drive for bill davis in busch series, didn’t stop and think about future. gordon didn’t set the busch series on fire. he tore up lots of equipment too.

i just think it’s a sad state of affairs when the young talent isn’t nurtured. i guess if drivers can’t bring sponsors to owners, then they don’t stand a chance.

And, if nobody watches because the Cupholes are permitted to turn the lower series into practice rather than racing than no money, money, money.

They should just go back to letting cuppers run for points. The buffoons made that lame rule that they don’t get points towards a championship because they incorrectly thought that was why they were running the series. Obviously it hasn’t stopped the greedy sob’s from destroying the series. If they are going to continue to make a mockery of it, why not go all the way and let them dominate the points and earn tons more championships? And their brilliant idea for next year? Add a companion race to the ever exciting Pocono, where the top 10 will be all cup jackasses. Brilliant.

Another point is long term contracts for drivers. Sponsors of course want to have a face for their ad campaigns, which suits both the teams and the drivers. However it creates a situation where there is very little mobility for everyone.
Notice how the current crop of heroes has been around far longer than their predecessors?