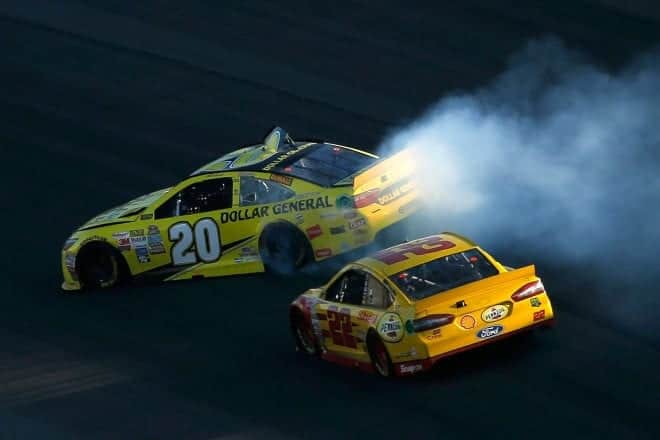 It’s time to do the Talladega Tango once again. You know, that dance when a driver hangs around with a bunch of friends and then gets shuffled out of the order only to end up staring at everyone’s backsides. Or maybe it’s the dance when a driver tries to get close to someone they like and blam, they find out that person is already spoken for, and instead the wall winds up being the only dance partner.

It’s too bad, however, that we all can’t do the Talladega Time Warp. Aside from making a nod to Rocky Horror, doing a little dance that takes us all back in time would be much appreciated when considering this mammoth restrictor-plate track. Because at this point it sure seems like being able to race without the plates would be a most welcomed thing.

That the race encourages all kinds of bad clichés like Russian Roulette, crapshoot, a lottery or any other number of descriptions of luck sure seems to confuse the event. The thing that is missing from all of those things is the concept of skill – instead pointing toward the notion that the race is all based on fortune.

In yesterday’s piece, Tom Bowles pointed to that notion, noting how the results for drivers in the Chase can fluctuate like a yo-yo, with little or no consistency. So yeah, that is definitely the kind of thing that should be central to deciding the champion of the sport.

The happy flip side for the sport, of course, is that of any race, this one can truly be won by any team that shows up looking to go the distance. The perceived hope is that one of the Chase drivers will win, but what if Clint Bowyer or Kyle Larson or whoever is driving the No. 26 this wins? Does that do enough for everyone? So yes, it’s that time again. Let’s do Talladega again.

Happiness Is… Racing. This may seem silly, but watching Joey Logano and Matt Kenseth go at it last weekend was something that has seemingly been missing. The aero package this year often allows the leader to cruise out in front of the field. For a change, and sadly, it does feel like a change, the second-place car caught and harangued the leader.

Kenseth looked like he was about to secure himself a spot in the next round and tried everything in his power to keep Logano behind. Blocking high, blocking low, Kenseth could do only so much before Logano had enough and decided that a little love-tapping would be necessary. That led to the next best thing to happen in a while.

The NASCAR season is a long one and drama is frequently manufactured to keep everyone’s interest. This incident brought about the actual frustrations of a driver who is watching a stellar season slip away, Kenseth, while also solidifying Logano’s consecutive strong year. Two top drivers going at it with title implications. That works – especially when it was just one of those racing deals.

Happiness Is… America. This one is not to trumpet how awesome America is or a way late expression of Independence Day. Instead, the focus here is on the Circuit of the Americas. Note that the track in Texas is not named for its locale or even the state in which it resides but rather for this country. That either means that Texas IS America or that Formula 1 had a hand in naming the track to make it seem more cosmopolitan. None of the European tracks on the schedule have such a name (Silverstone, Spa, Monza, etc.)

But who cares, it’s time for those world-traveling racers to make their way stateside again to the beautiful track sitting just outside Austin. There won’t be any of the Talladega-like madness happening here, just good ol’ race driving with Mercedes likely to lay another whooping on the field. Having already won the constructors’ title, the only thing left for the Silver Arrows is to get Lewis Hamilton his third championship. Because of Nico Rosberg’s retirement at the Russian Grand Prix, this outcome is pretty much inevitable. That doesn’t mean that we shouldn’t enjoy watching the cars make hay around the track – and dream what it might be like to get Indy cars there one day.

Happiness Is… Business. If anyone can make sense of whatever it is that is happening with NASCAR and its franchising, or medallions or charters, feel free to drop a line. Otherwise, that side of things is starting to seem like a goofy shell game. As for the simpler things, it’s good to see that Kurt Busch is all set to continue to run at Stewart-Haas Racing.

Has anyone else been paying attention to the fact that Busch is set to advance into the next round of the playoffs? He almost seems like an afterthought – something that is strange for the mercurial driver. Even more compelling is that he continues to lurk just behind the leaders, showing that he may be the best proverbial dark horse for the title. Now that would be a shock. With his contract status now settled and Monster energy drink throwing more money into the fold, the elder Busch may just have a little more bounce in his step during the final weeks of the season. Or maybe that’s a bad thing. It’s hard to tell if he’s one of those drivers that drives better when happy or angry. Hm, perhaps he’ll stay true to this column’s intent – enjoying things.

Like you I look forward to learning more about the franchising plan. Regardless of the plan it’s difficult for me to understand how it enhances the value of the megateams. For example I doubt that Hendrick Motorsport is any more or less valuable with or without a medallion. And when the time comes, will there be a buyer, if not, what will happen? I suspect the same thing that has always happened.

Meanwhile, the future of Red Bull’s F1 team still seems in doubt. They don’t appear to be any closer to forces any of the engine builders to supply them their latest technology. It will be interesting to see how that battle of wills turns out.

When I saw the title today it made me think of a Jimi Hendrix lyric were he proclaims, “there ain’t no life nowhere”, only the NASCAR equivalent would be, “there ain’t no happiness nowhere”.

I find very little happiness in following NASCAR anymore, just frustration and anger with the current leadership. Can’t wait for Gordon’s last race then Brian will have no power over me whatsoever.

Circuit of the AmericaS is named for the 2 continents NOT the United States.

Brain Farce is setting the Owners to take the fall for the implosion of NA$CRAP. The Frances have
already banked the TV revenue, now they want money from the owners for a franchise. I hope the
the RTA is smart to make a purchase on a long term basis and tied to an increased growth of the sport.
The RTA would be better served to establish their own sanctioning body and lose the ISC tracks. Can you imagine
racing at Rockingham, Wilkesboro, and some of the popular road courses?

I can’t wait for the “medallions” – at last real taxi cab racing!

I was at COTA last weekend hoping to get a tour of the track. They were to busy with race prep to run tours. Tickets are high and I would like to check it out first so I’m not too disappointed with my seats.