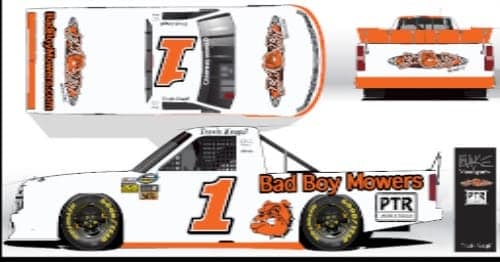 Talladega is a sponsor’s dream, with tight packs and an even playing field allowing for multiple companies to be shown on television screens at once. Camping World Truck Series team MAKE Motorsports announced a partnership with one such company for the upcoming race at the 2.66-mile superspeedway.

Bad Boy Mowers Inc. will sponsor the No. 1 Chevrolet of Travis Kvapil during Saturday’s Fred’s 250. The company is known for its zero-turn commercial lawn mower and hopes its partnership with Kvapil, a nine-time race winner in the CWTS, will pay dividends in the final restrictor-plate race of the 2015 season.

Kvapil, the 2003 Truck Series champion, has one career Truck start at Talladega. He finished 26th while driving for Jack Roush in 2007.

“I am excited to have Bad Boy Mowers as the primary sponsor on our No. 1 Chevrolet Silverado,” Kvapil said. “Talladega is always a fun race because anything can happen. The draft is a game changer for teams as small teams have a good shot at running up front.”