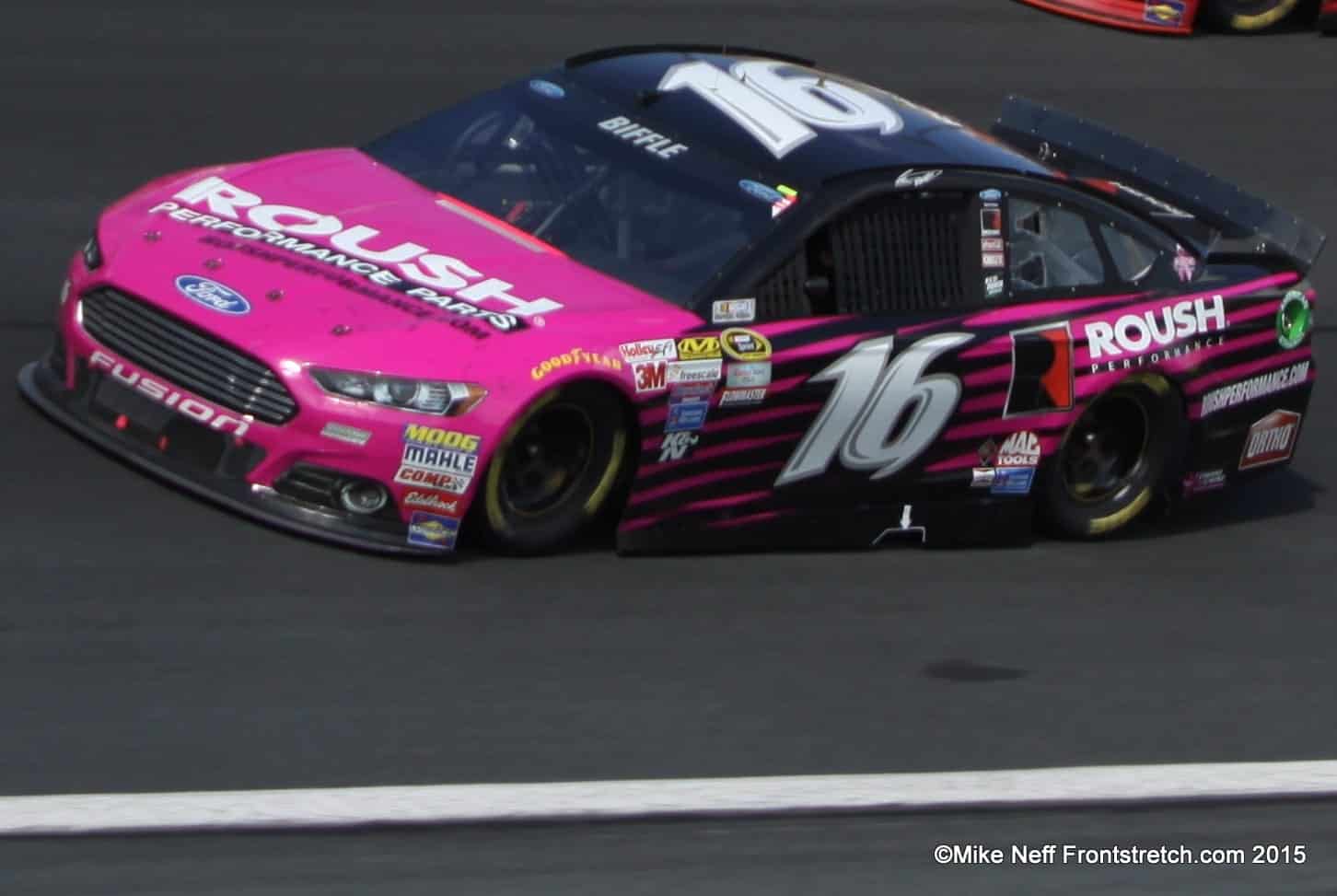 On Friday afternoon, the Sprint Cup Series took to the 2.66-mile Talladega Superspeedway for two 55-minute practice sessions that would allow the teams to check out their racecars and see how they work by themselves and in the pack.  Since teams were on two two different strategies for both sessions, it is rather difficult to tell who has the pace necessary to get into the final round of qualifying on Saturday.

In the first practice, Greg Biffle was quickest with a lap of 47.597 seconds (201.189 mph) while running in a three-car draft.  Danica Patrick and Justin Allgaier were right with Biffle and ended up with the second and third fastest laps, respectively. Clint Bowyer was fourth fastest, while Kasey Kahne rounded out the top five.

Unlike other races in the Chase to this point, the Chasers were not at the top of the charts. The fastest Chaser was Matt Kenseth down in 13th. Kenseth did run the most laps of anyone in the session with 35. Denny Hamlin was 15th, followed by Carl Edwards.

Only a few drivers focused on single-car runs during the session. Jimmie Johnson, who was 36th fastest, is one example. His strategy in recent years is to never run in the draft during practice and did nothing to dispel that notion on Friday.

Many of the teams chose to do all of their running during the first practice session, despite the fact that the session ran at a time of time before the race is scheduled to start on Sunday. In the second session, a full one-third of the 45 entrants chose to sit out the session all together.

Of the 30 that did get on-track, Team Penske’s Brad Keselowski was quickest with a lap of 48.752 seconds (196.423 mph).  Much like in the first session, the fast lap of the session was set in a small draft. Keselowski was drafting with Ryan Blaney, who ended up second fastest at the time. Dale Earnhardt Jr. was third quickest. Tony Stewart and Kahne rounded out the top five.

Only six of the Chasers ventured out for the second practice session. None of the four Joe Gibbs Racing drivers exited the garage. Ryan Newman and Martin Truex Jr. joined them in street clothes.

Two teams will fail to qualify and right now, there are a couple of teams that look to be in trouble. Timmy Hill was only 43rd quickest in the first session, but picked it up in Happy Hour to a lap of 50.375 seconds (190.094 mph). He still appears to be a bit off the expected pace of what 36th will be on Saturday. JJ Yeley was a little faster with a lap in the first session of 50.272 seconds (190.484 mph), good enough for 40th. With Michael McDowell (the other driver in addition to Hill that has to get in on speed) looking like he’s fast enough to get into the top 36 Saturday, Yeley is the next man up the list. Further up the list is Bobby Labonte in the Go FAS Racing No. 32. Labonte’s pace by himself is currently slower than either Hill or Yeley, but he has the advantages of the No. 32 being ahead of both Hill and Yeley in owner points and the past champion’s provisional in his back pocket.

Qualifying is scheduled for 4:15 p.m. ET on Saturday, after the Camping World Truck Series’ Fred’s 250. The session will air live on NBCSN.