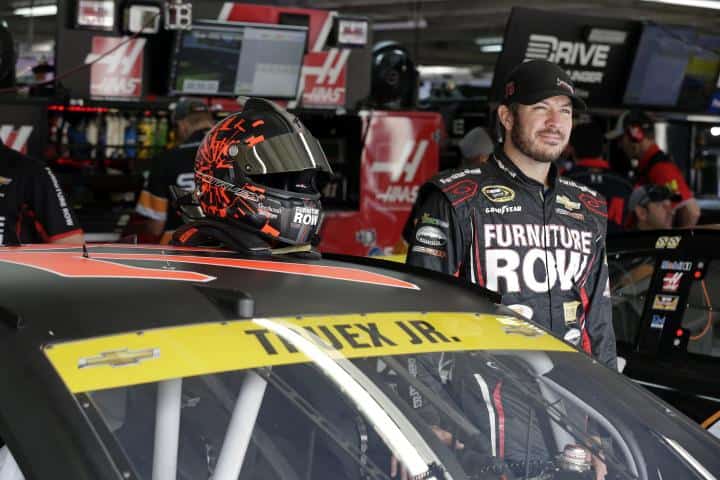 Welcome to Talladega race week. The two races in Alabama have to be my least favorite races to try to pick a good driver lineup for NASCAR Fantasy Live. I equate it to that old game where you have to guess how many gumballs are in a gumball machine… you think you have a pretty good idea but you end up way off. What I have learned over the years is to simply mitigate your risk at the restrictor-plate races. So what does that mean for your team? Well it means picking drivers who are mostly starting in the back so when… not if… they wreck you, won’t lose as many points as the you would have taking the guy on the pole. So with that Debby Downer outlook on fantasy racing this week, lets get to the picks.

Truex’s time in qualifying was disallowed because he went below the double yellow line on his qualifying attempt. This is a perfect situation for NASCAR fantasy players at Talladega, we have a fast car and good driver starting shotgun on the field. Look for Martin to ride around in the back for a while, but he has a car capable of leading and winning for sure.

Bowyer will start 29th this week. Bowyer has won twice at Talladega in the past and should be able to mix it up. Though, Bowyer had his car in reverse when he went to leave the pit road for qualifying and backed into the No. 51 car of Justin Allgaier. It didn’t seem to have much effect on Clint’s qualifying run, but it did put a good size ding into the grill of the No. 51 car.

Dillon is best qualifying driver that I have picked for this week and he starts 26th. I like the way the No. 3 car has looked the last few weeks, and Dillon usually runs well at the restrictor-plate tracks. I think that Dillon should have no issue running up towards the front on Sunday.

As I previously mentioned, Bowyer backed into him on a strange accident on pit road right before qualifying. I think that this damage took a bit of speed out of his qualifying run which is just perfect for a fantasy pick this week. The No. 51 will roll of in 39th spot and will have nothing but upside on your fantasy team.

Normally due to money constraints, we are stuck picking a cheaper back of the pack guy each week. This week that isn’t Cassill, we have plenty of money left over to take a bigger name driver, but Landon starts 41st and has as good as a chance at a top 10 as anyone this week. All we can hope for this week is our drivers stay out of the big one.

It’s Talladega and he is an Earnhardt. It just makes sense.