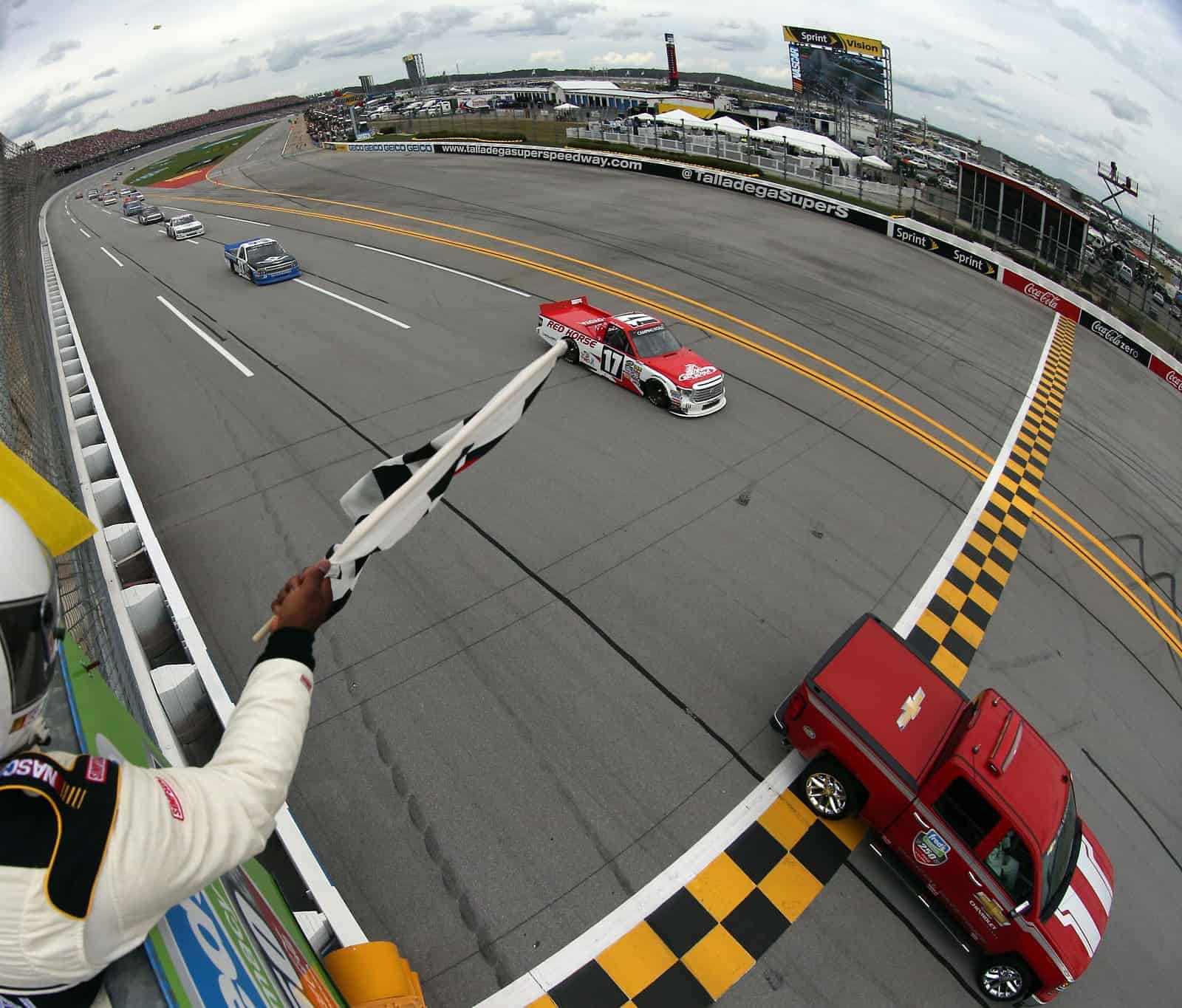 Following a rules change allowing only one green-white-checkered attempt at the end of any NASCAR race at Talladega Superspeedway this weekend, polesitter Timothy Peters was the first beneficiary of the rule as the NASCAR Camping World Truck Series race ended under caution on Saturday afternoon.

While racing for the lead on the final restart, second-place Spencer Gallagher was being pushed by third-place John Wes Townley. As Gallagher gained momentum, Peters moved up the track to throw a block. Gallagher tried to dive for a pass underneath Peters, but lost control of his truck and slid back up into the outside wall, catching Townley in the process. The caution flew and the race was official, giving Peters the win after only one GWC attempt as opposed to the usual three on any given race weekend. NASCAR decided to reduce the number of attempts to one in the name of safety.

Brandon Jones, who was on the front row next to Peters on the final restart, was able to avoid the wreck and finish second while Mason Mingus followed behind him in third. Erik Jones was able to maintain his points lead with a fourth-place finish. Tyler Reddick rounded out the top five.

Matt Crafton — teammate to Hayley and Sauter — saw his championship hopes take a huge hit with only four races remaining this season. Crafton was involved in two cautions during the race, neither of which were of his own making. Crafton finished 24th, two laps down after leading 43 laps. By comparison, race winner Peters only led 23.

Erik Jones now leads Reddick by 18 points after Crafton dropped to third. Crafton is 23 points out of the lead. Fourth in points is Sauter (-55) followed by Peters in fifth (-100).

The next race is the Kroger 200 at Martinsville Speedway. Coverage begins Saturday, October 31 at 1:30 p.m. ET on FOX Sports 1.

Great job Brian. That damn win was yours, too bad.

Race control’s usual hair trigger on the caution flag was slowed by the realization that we may not end under green. What to do, what to do? Race control should be applauded for being consistently inconsistently in not penalizing the 33 for being pushed when they did the exact opposite last year with the 88. Race control, why would you ever let that beat up 88 back on track during caution just to save going a lap down? Buford T. Justice’ sheriff car was in better shape than that which brings up another idea. Can’t you picture Bill saying to Brian, “There is no way, NO way that you came from my loins. The first thing I’m gonna do when I get home is punch your momma in the mouth.” – Buford T. ?

I don’t like the punch in the mouth since now he’d probably say “…I’m doing a DNA test.”