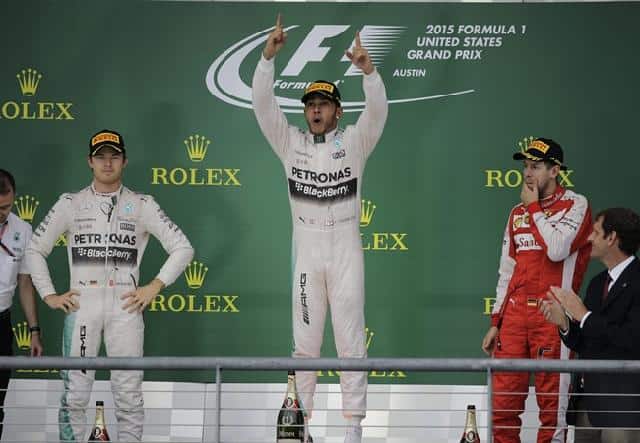 Formula 1: Hamilton Scores Second Consecutive Championship – The United States Grand Prix may have been the best race of the F1 season. Rain brought questions as to the actual performance of any of the teams and also made for a frustrating schedule – as qualifying got pushed to Sunday morning. During that session, things began to return to form as Nico Rosberg earned the pole with his teammate Lewis Hamilton taking second. Hamilton had to be salivating at his chances to earn his second straight championship, especially in what could be considered his second country. The scenario was pretty easy: Should Hamilton win and Sebastian Vettel finish third or worse, then the title stays with Hamilton.

Hamilton made his move on the opening lap, pushing Rosberg wide and driving into the lead. The Red Bull duo of Daniil Kvyat and Daniel Ricciardo, however, were able to keep the pressure on the Briton, as the Red Bulls showed surprising pace racing on the intermediate wet tires on the slick track. Hamilton finally capitulated the lead, but it turned out to be of little consequence.

A series of cautions for, well, you name it, meant that no one was able to get away. The level of attrition mirrored that from Australia to start the season as only 12 cars finished the race. After a late caution for Kvyat’s spin into a wall, the field once again bunched together with Rosberg leading the way. Though he raced out to a decent lead, a slip up that sent him wide allowed Hamilton to make an easy pass and then cruise to his 10th win of the year.

Camping World Truck Series: Matt Crafton Takes Championship Hit – When it rains, it pours for Matt Crafton and the No. 88 team. It all began with a large piece of debris on the nose of Crafton’s truck, forcing him to drop out of the lead on lap 67 after leading a race-high 43 circuits. Then, as the field prepared for green-flag pit stops, the No. 88 Toyota ran out of fuel, something particularly unusual for the Crafton/Junior Joiner combo to do, forcing an extended pit stop to keep the truck running.

If all of that wasn’t enough, Crafton was back in the pack when he became the victim of a sudden move by Stanton Barrett, who turned across the nose of the No. 88. Running in 23rd, Crafton pitted for fresh tires and to top off the fuel tank, but just three laps after the field went green, the big one happened. Despite the extreme amount of damage, Crafton managed to finish the race 24th, two laps behind the winner.

“The guys brought a great Menards Toyota Tundra, and we led a lot of laps today. This says a lot for what these guys have done at the race track, and what they build, and are bringing to the racetrack,” Crafton said after the race. “We qualified seventh and we led a lot of laps. It was fun racing there for a lot of it, but it just wasn’t our day. Our goal is to go out and win the final four races and just see what happens with the points, I’m not worried about it.”

The bottom line is that the No. 88 team simply can’t afford to have any more poor finishes like the one Crafton posted at Talladega. The trio of drivers locked in this championship battle have been so strong all season that a small slip could mean the end of the road for any of them, and with the hole Crafton is already in, he needs to capitalize on the final four races of the year if he intends to become a three-time champion. – Beth Lunkenheimer

The No. 60 team has been up and down as of late, showing top-10 speeds on race day, but not enough to win like Regan Smith and Chase Elliott. But as we approach Texas – a track that Roush Fenway Racing has had success at – Buescher should be able to minimize the damage if Elliott, Smith and/or Ty Dillon outperform him. – Joseph Wolkin

NHRA: Stars of Tomorrow – This past Friday NHRA announced six rookie drivers from Top Fuel, Funny Car, and Pro Stock as eligible candidates for the 2015 Automobile Club of Southern California Road to the Future Award. The award will be voted on by over 200 of the nation’s leading auto racing journalists and will be presented during the NHRA’s annual championship awards ceremony on November 16.

Votes will be based on such criteria as number of events participated, performance on and off the racetrack, participation in NHRA promotions, and relationships with fans, sponsors, and media. The six drivers presented as candidates are John Bojec (Funny Car), Bo Butner (Pro Stock), Jenna Haddock (Top Fuel), John Hale (Funny Car), Alan Prusiensky (Pro Stock), and Drew Skillman (Pro Stock).

“To be nominated recognizes not only that a rookie driver had a noteworthy first season, but also that they demnstrated exceptional potential for the future,” said Robert T. Bouttier, president and CEO of the Automobile Club of Southern California. “We congratulate all six of the candidates for this year’s award and look forward to enjoying their achievements both on and off the racetrack for many years to come.” – Toni Montgomery

Sports Cars: The Second New GTD Chassis Announced – With the IMSA WeatherTech SportsCar Championship’s GT-Daytona class moving to full GT3-spec for 2016, it was expected that a number of new cars would be on the grid come Daytona in January. Previously, Turner Motorsport announced that they will use the new BMW M6 GT3 in 2016 (a modified version of said car will be used by BMW Team RLL in the GT-Le Mans class). Last week, the second new car was officially announced. Paul Miller Racing announced on Tuesday that they will make the switch from the Audi R8 LMS to the Lamborghini Huracan GT3 for 2016.

While the Huracan in GT3-spec has not raced in the United States, the car ran very well during races in the Blancpain Endurance Series this year. On debut at Monza back in April, the Huracan GT3 driven by Fabio Babini, Jeroen Mul and Andrew Palmer claimed overall victory in the three-hour race from pole. Later, the team was DQ’d for a refueling restrictor that didn’t meet regulations, but the DQ was later overturned. Regardless, the Huracan showed a lot of speed. Plus, the Huracan uses a V10 engine fairly similar to what the Audi R8 LMS has had, so familiarity may benefit the Georgia/New Jersey-based team.

Moving to the Huracan and joining up with Squadra Corse, Lamborghini’s customer division, will likely mean that the team will sport a new driver lineup in 2016. 2015 drivers Christopher Haase and Dion von Moltke both have long associations with Audi. While Bryce Miller (the team’s third driver for endurance races) will more than likely continue with the team next year, a new full-time driver pairing will be announced in the coming weeks. – Phil Allaway

Despite the weather conditions the F1 circus showed us what it was made of in Texas. And the Merc duo showed us the better, for fans anyway, side of teams. Doubt that Nico and Lewis will be exchanging Xmas cards this year. Although in the end Nico did gift the race to Lewis by running wide when the win was within sight.

Quite the contrast to the fiasco at Talladega.

I didn’t see that good of a race coming from COTA. Mixed weather is the best. Great to see Red Bull fighting for the lead and McClaren doing well in the wet. Too bad for them it dried out. Once again the virtual safety car played a role. Did Rosberg time it just right or cheat it? I wish Huston would tell us how VSC works inside the cars. I imagine an array of LEDs as an indication of correct gap to the leader and another indication when the race resumes green? That’s not the first time Rosberg handed the race to Hamilton. Over the last two seasons he has solidified his position as a second driver. Faster sometimes but not consistent.

Have to agree that Nico is not a no. 1 driver for a top flight team. Certainly not going to get the measure of Lewis on a consistent basis. But for that measure Kimi appears to be well past his “sell by date” as well.
The conditions at Austin did add some interest to the event. Have to wonder if the track hadn’t dried what the result would have been.
It would be interesting to know how the VSC actually works. Trying to remember did they use that or a safety car in Russia? Remember Seb moaning that Lewis pace was too slow?

Are those NHRA guys athletes too? The average age of those rookies is 47. Just a guess but old guys rule in NHRA.