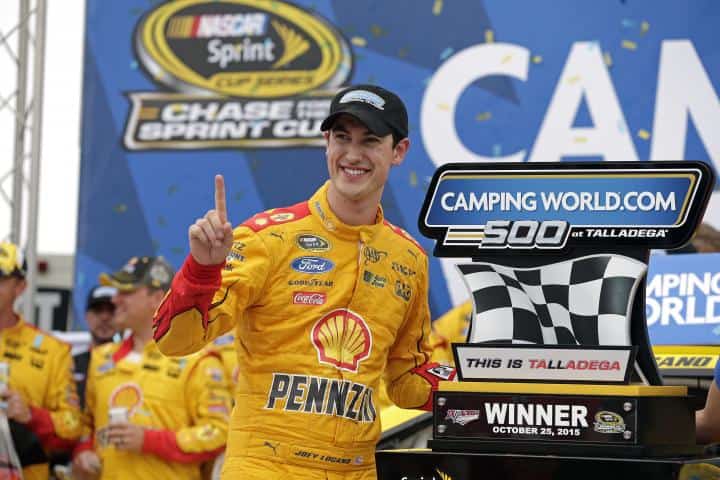 It’s been a long, tough, and often fruitless season for Roush Fenway Racing, but there were bright spots for the team on Sunday. All three RFR teams ran inside the top 10 at some point during the race, with Greg Biffle leading when Jamie McMurray’s engine went south, triggering a green-white-checkered finish that ran Biffle’s tank dry and forced him to the pits.  With Chris Buescher waiting in the wings, and Ford driver Ryan Blaney looking for a ride, there’s been talk about Trevor Bayne’s or Ricky Stenhouse Jr.’s rides being in danger, but both ran well Sunday. Bayne was in and out of the top 10, and Stenhouse finished ninth. It’s hard to say the team has turned a corner, but some positive momentum can trigger more success, and this team could really use some.

Talladega is always more of a crapshoot than an actual race, but this time it was made even worse by NASCAR’s questionable calls at the end. At the first attempt for a finish, the green flag flew, which should have made the attempt official, but NASCAR claimed that because the field had not yet crossed the start-finish line, which is at the end of the frontstretch at Talladega, closer to turn 1, the restart never happened. But if it was not an official attempt, why didn’t NASCAR reset the field to their positions before the yellow flag came out? It’s pretty hard to have it both ways; either it was an official attempt, and under the updated superspeedway rule, which allows for one GWC try, should have ended the race; or the restart was waved off, meaning the field should have been set according to where they were when the original caution, which set up the GWC attempt, flew. Instead, NASCAR took what they wanted from the rules, something that’s been all too common for the sanctioning body. It ended up looking as though NASCAR regretted its decision to amend the three-attempt rule and did what they could to rectify that. But whatever the reason, it leaves a sour taste.

And they weren’t done. On what was the final restart, all hell broke loose when the No. 4 of Kevin Harvick suffered an engine failure, resulting in a multi-car crash. With Joey Logano in the lead and Dale Earnhardt Jr. gaining momentum on the bottom, it took what seemed a very long time indeed for the yellow flag to fly (delaying deployment of safety vehicles), and it even looked as though Earnhardt had caught Logano when it did fly, though scoring showed Logano to be the winner. Was the caution held in an attempt to give Earnhardt the chance to take a victory and advance in the Chase? Does it matter if that was the case if there is even a question that it could have been?

Jeff Gordon took the pole and led twice, but he was out front for just eight laps. Still, Gordon clinched his spot in the next Chase round with his third–place result, and the day was positive for Hendrick Motorsports as a whole as Earnhardt led the most laps on the day and Jimmie Johnson and Kasey Kahne also led, the first time all four HMS cars have been strong in a while. As the last man standing in the Chase, Gordon is likely to get a little extra attention at the shop, and that’s never a bad thing.

Brad Keselowski won this race last season, but never led a single lap on Sunday. Keselowski has been a step behind teammate Logano for much of 2015, though his fourth-place finish is certainly a good one and he’s in the top five in points. So, call it a good day, but not a great one for the 2012 champion.

There were a lot of things that went’ wrong on Sunday, from a Matt Kenseth-Logano pit road spat, to Denny Hamlin’s miscreant roof hatch (why does the No. 11 have such an issue keeping things shut on that car? His hood’s popped up twice this year, and now the hatch…) to a slow pit stop for Martin Truex Jr. that could have cost his season. Earnhardt Jr. was saved by the bell, or at least by Justin Allgaier’s engine failure as he was about to lose a lap. McMurray lost an engine.  Johnson and Kyle Larson got dumped on a restart. But a couple of things went down that are worth a closer look.

NASCAR has speed limits on pit road for a good reason: safety. But it didn’t sit quite right when a speeding penalty was dished out to Casey Mears, whose car had been punted by David Gilliland as he dropped to hit the pits and was sliding through the grass along pit road when the penalty was assessed. On one hand, he was speeding, and the call was correct according to the rule. But on the other, Mears’s car was sent sliding by someone else and the driver wasn’t able to slow it down through no fault of his own. So, the rule was upheld, but the spirit of the rule is a little bruised by that call.

But the real controversy came on the GWC, when Harvick, who know full well that his engine wasn’t up to the task, stayed in line, causing cars to pile up behind him. Several drivers expressed suspicion that Harvick got into Bayne on purpose as Bayne tried to pass the already-limping No. 4. The caution certainly helped Harvick by freezing the field. Had he moved out of line to allow the field to safely pass, he’d have been the last car on the lead lap by the finish, putting him in danger of Chase elimination. Dirty pool?  If he turned Bayne on purpose (and radio chatter from crew chief Rodney Childers does add fuel to the fire. Childers told Harvick, “Hopefully they wreck right past the start/finish line; might end up with something.  That’s our only shot.”), it’s about as dirty as it gets, and NASCAR does need to review the situation carefully. Intentionally causing a crash to ensure a Chase spot isn’t cool. It just isn’t. A few of Harvick’s fellow drivers expressed their displeasure on Twitter.

What a joke we have a car with no motor wreck the field to end the race. Complete crap. Sorry to anyone who spent $ coming to this circus

Wow. That was the champ. Not a very smart move. What a joke. Not happy

Sometimes it really is as simple as it looks. Logano got a better restart than Earnhardt Jr. on the final restart, letting him get the edge on Earnhardt before the caution flew, freezing the field and ending the race. Earnhardt was gaining on Logano as the cars picked up speed, and the No. 88 was the faster car, but Logano had the advantage of lane choice for the restart, and he rode it all the way to the win, and a sweep of the Contender round. Talk about peaking at just the right time; Logano lost a chance at the title last year on a bad pit stop, but barring mistakes, he’s looking like an overwhelming favorite if he can avoid disaster between now and Homestead.

Martin Truex Jr.; Furniture Row Racing: Truex faced Chase elimination after a slow pit stop left him out of the draft and a lap down, but he was able to regroup and take home a seventh-place finish on the day. That means Truex moves into the final 8 in the Chase, title hopes still alive. You can’t really call him a title favorite right now, but dark horse? That fits pretty well as he always seems to be right there in the mix at the end of the day.

Cole Whitt; Front Row Motorsports: Talladega is often friendly to the smaller teams, as restrictor plates make the cars much more equal, but this week wasn’t so kind (Michael Waltrip did finish 13th in the No. 98, but it was a Michael Waltrip Racing Toyota under the number, not the usual equipment for Premium Motorsports). Whitt had a solid day, if unspectacular, and earned his finish. He’s a talented young driver, and he was the best on his Front Row Motorsports team this week.

Bobby Labonte; Go FAS Racing: The 2000 champ made the last of four scheduled starts this season and while the finish was a far cry from Labonte’s heyday, so was the equipment he was driving, and for this team, a 23rd-place run is a very good day.

That “pit road mishap” had no consequence on anything, other than clearly Matt took himself out of the race mentally and Logano was in his head.

Really, Amy????? You can use a restrictor plate race’s running/finishing order to insinuate that Roush (or any team) has improved or turned a corner toward running better. Come on man.

On the other hand you nailed the Harvick situation…. “it’s about as dirty as it gets”. That about sums it up but then anyone that isn’t a fan of Harvick’s knows what a punk he is. If NASCAR doesn’t react to it that pretty much proves that this format can’t be managed/officiated with any consistency and is open to all kinds of shenanigans and questionable actions by drivers which will result in more people seeing it as entertainment (wrestling) and not a sport at all.

Harvick’s actions didn’t disappoint.Those Junior fans should have been throwing the exploding cans at him not Logano. There was a good chance Earnhardt would have won if not for Harvick being the bonehead that he is.

Nascar created this elimination format, so is anyone really surprised that someone did what was necessary to keep going? I’m not saying what Harvick did was intentional or not, right or not. But when drivers are put into a situation that Brilliant Brian has created, it doesn’t surprise me to see that sort of thing happen. After all, it makes a ‘game 7’ moment, doesn’t it?

nope, I’m not surprised in the least.

Harvick should not longer be referred to as “The Closer” or “Happy” but from now on as “SLICK” when something is so obvious and you can easily get away with it Scott free, you are obviously “SLICK” Makes me remember a certain democratic candidate now running for president. .