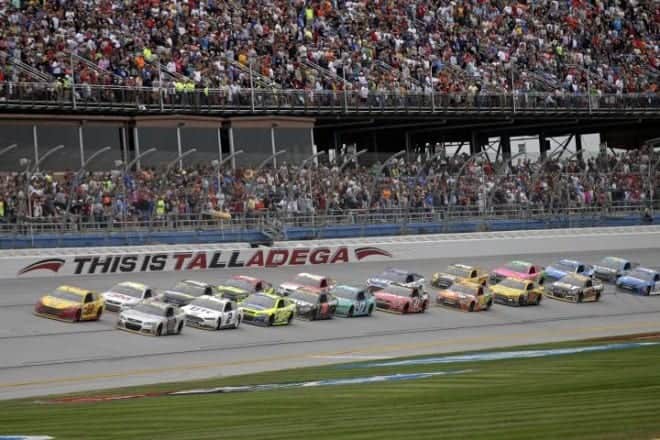 While some hardcore Dale Earnhardt Jr. fans may disagree, any notion that this weekend’s restrictor-plate action at Talladega Superspeedway was disappointing or boring couldn’t be further from the truth.

Sure, the sport’s most popular driver was knocked out of contention for the 2015 Sprint Cup championship, but his battle throughout the race to hold point was phenomenal. He knew what he had to do to advance to the next round of The Chase and he gave everything he had.

He also knew the rules – one shot at a green-white-checkered.

And just to be clear, in order to have a green-white-checkered finish, the race has to officially be restarted after the caution. That didn’t happen, so NASCAR had to re-rack and start over, per the rulebook.

This wasn’t a situation where the sanctioning body was making things up as the race played out even though some immediately suggested that on social media. When the cars came back around after the caution was extended, the crash involving Kevin Harvick and numerous other drivers in the field occurred after Joey Logano and Earnhardt Jr. took the green flag.

Does it suck? Sure, if you are a fan of Dale Jr., but it wasn’t anything nefarious or sinister or some twisted attempt to ensure he made it to the next round. In fact, the way the whole thing played out, it would have probably been pretty easy for the sanctioning body to call the race at the split second that Earnhardt Jr. took the lead – because he was going to get past Logano.

Of course, if you are a Logano fan, then you are on Cloud 9 because your guy just made history by sweeping an entire elimination round in the playoffs. Plus, it’s impossible to ignore the magical moment of Jeff Gordon winning the pole in his final restrictor-plate race and the near win by Greg Biffle with his huge fuel-mileage gamble.

As for Harvick’s bonehead move of diving to the outside, maybe I’m wearing rose-colored glasses here, but after listening to the in-car radio and watching the in-car video, I think he knew he was trying to get out of the way. It was obvious that despite his request for Trevor Bayne to “push me” that wasn’t going to happen. Bayne went high at the exact moment Harvick realized he was going to get splattered like a bug, and the last time I checked two racecars can’t occupy the same piece of real estate on the track.

I don’t know if the CampingWorld.com 500 was a “game 7 moment” but it wasn’t any worse than game 5 between the Texas Rangers and the Toronto Blue Jays – both had drama, both had chaos and both left fans wondering WTF.

Shame on me for opening this link. And there’s no maybe about it, you are wearing rose colored glasses with regards to a lot of observations. You remind me of Kevin Bacon at the end of Animal House… “Remain calm!,,, All is well!” as everything around him is falling into chaos.

Thanks Bill B. I normally check the comments first, and this morning you saved my aggravation.

Funny how Logano dumped Kenseth out of fear, but Harvick was merely getting out of the way. Your views are as consistent as NASCAR (except for the fact that you merely write a shock article each week to try to garner the biggest reaction)

While here’s Jerry’s obligatory explanation to everyone about why NASCAR is always right.

I knew he would say that, and I wanted to read what the band of regulars here would say in response. I listened to Jordan on the Pit Reporters with John Roberts from Fox a few weeks ago. It was so incredibly one-sided. Everything NASCAR did was right, and everyone who disagreed just didn’t know what good racing was. The best analogy I could make would be to imagine a debate over whether Dale Sr. was the greatest ever, moderated by Michael Waltrip, with Richard Childress and Chocolate Myers as participants. As my involvement and emotional investment in Cup racing has lessened over the last few years, I’m entertained by the lockstep media instead of infuriated by them.

Tim S, yeah me, too. I only opened the link because I really did want to know what flavor the kool aid was this week.

Dear heavens, you mean he does radio too? Glad I missed that!

Tell us Jerry! What is the flavour of the Kool-Aid?

ooo ooo Cherry? I hope it’s cherry. I like cherry.

so long as it isn’t green.

The wheels pretty much came off of NASCAR Sunday at Talladega. I’m surprised there are any tires to kick.

I like cherry and grape, occasionally. I didn’t say the race wasn’t a cluster at the end, I just said it was a good race and had a lot of action. Too bad you don’t agree.

You wrote: That didn’t happen, so NASCAR had to re-rack and start over, per the rulebook.

Which rule is that? I lost the link to the on-line version of NASCAR’s rulebook fans can look at it to see the rules. Or is this just another example of Rule 6.6 Subsection 6- “It is what we say it is. Or else.”

Last entry in Brian’s “rule” book: I’m making this up as I go.

It did have a lot of great racing, right up until the crap show of the GWC, the long yellow forcing Biffle to pit, and the Harvick driving a car in the middle of a pack after the arse had fallen out of it. Come now…

I’m betting half of the hits on Jerry’s articles are people just coming in to read the comments.

that’s why I clicked on it. He may be a two time winner but I doubt he can breathe well with his head so far up NASCAR’s you know what.

Hey Matt, I thought you had access to the rulebook. You know, if you asked really nicely they might give you a copy. Possibly. And thanks for the concerns over the rain. It was bad but luckily our area didn’t flood.