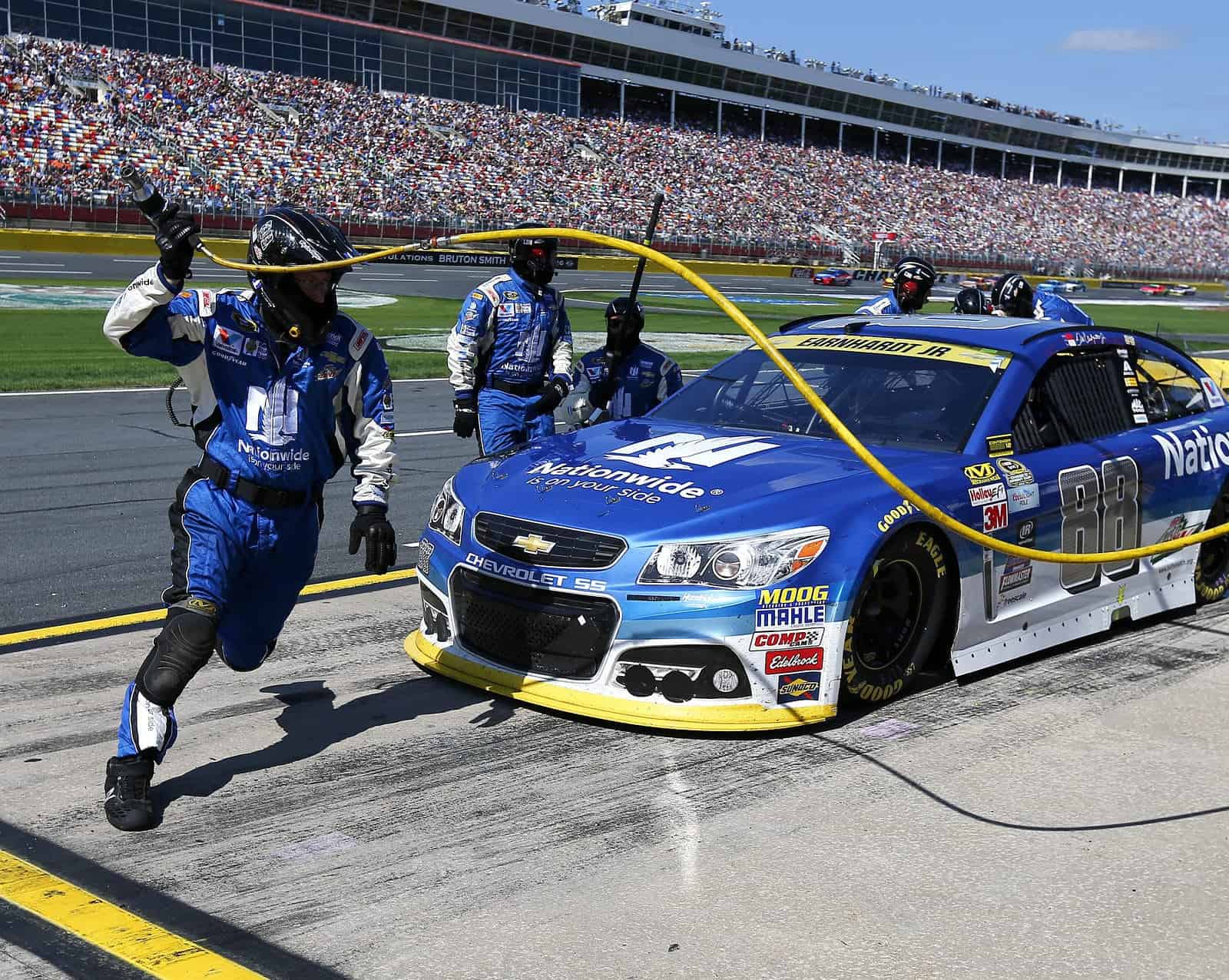 A crazy finish at Talladega is certainly no surprise. It’s just what happens at restrictor-plate tracks. What was a surprise was just the way that it was wild this time. Yes, there was the predicted accidents, but then the second restart when we thought there would only be one, and then many questioning if Kevin Harvick caused the final wreck on purpose. And then waiting, waiting and waiting some more for the final results and Chase standings to be released by NASCAR.

No matter what kind of track he is on, or what the circumstances are, Joey Logano has ended up in the right place at the right time in the last three weeks. Logano has won three straight races and if momentum means anything he’s got more than anybody. However, the points will be reset in the next round as the Chase field was chopped from 12 to eight at Talladega Sunday. So winning these last three races was good and all for Logano and the No. 22 team because, well, you’d always rather win than not. Now it will be interesting to see what happens in the next three races, first of which is at Martinsville on Sunday.

Whether you liked or hated the finish, or fall somewhere in between, at least staying around for the end in this race was worth it. Sure, there can be any number of twists and turns in the midst of a race, but every fan, unless your driver is winning by a lot, wants a good finish and we weren’t disappointed with that. It would have been nice to see the group race back to the line, but NASCAR did make the right call, as there well could have been several cars and drivers sitting helplessly on the front stretch. There was really no choice on that one. On whether there should have been more opportunities for a green-white-checkered finish, well, that’s a whole different story.

Jeff Gordon hasn’t set the NASCAR world on fire during the Chase. He has not been Logano. But in finishing eighth, 10th and third in the last three races, Gordon seems to have found a little something more in these final days of his Sprint Cup career and with that, he is among the final eight to advance to the next round. And now, as the lone Hendrick driver remaining the Chase, you know that team will give Gordon all of its resources and any possible help on the track to make it into the final four at Homestead. Based on his finishes this year, and the fact that he has not won a race, Gordon is still bit of an underdog to win the title, but that’s probably just the way he likes it.

Often times you learn more about people on how they react when things just aren’t going their way. I’m not a member of Junior Nation, but certainly some respect for Dale Earnhardt Jr. Sunday. First, when a pit crew member was over the wall just a half second too early and cost Junior a drive-through penalty, Junior didn’t chastise the crew member on the radio, basically saying just to shake it off. Then when he got a timely yellow flag to stay on the lead lap, when asked if he could get back up front, Junior said, in no uncertain terms, that he didn’t see why not. And then at the end he was there on the front row, but just not in first place when the final flag ended the race.

There’s no debate that Harvick’s dying engine was the cause of the accident on the second restart. Harvick knew he was in trouble and was just going to try and nurse it home in hopes of some way of making the cut in the Chase. And let’s be clear here, Harvick has been no angel on the track during his NASCAR career. And so the accusations came from drivers and fans alike, alleging that Harvick did indeed turn into Trevor Bayne, who was passing on the outside, on purpose to cause the race-ending caution. There is, however, one significant hole in that theory. If Harvick was indeed bent on causing a wreck to save his spot in the Chase, why didn’t he do that when his car failed to get up to speed during the first restart? Yes, it’s true no one knows for sure what happened except Harvick, but it’s certainly not automatic that he started the final wreck purposely.

Ryan Newman hasn’t been spectacular at all in the last two seasons, but he had been the epitome of steady. Newman, who hasn’t won in each of the last two seasons, seemed to be ready to make it to the next round of the Chase again. But when he pulled out of the top line and thought he was going to be going with the fast car of Earnhardt Jr., he suddenly found no help when Junior pulled back into that top line. That left Newman chasing track position in the final laps of the race and while he avoided the final accidents, his 12th-place finish wasn’t enough to get him into the final eight.

When drivers come to Talladega, they know it’s a real wild card on just what will happen here. Often times because of the big packs, they are caught up in accidents that they had nothing to do with originally. But Denny Hamlin must have had an extra wild card in his deck Sunday because it wasn’t any kind of contact that cost him major problems and points. Hamlin’s roof hatch came undone and it took several pit stops for the crew to get it taped down good enough so it wouldn’t pop up again. And just when it appeared Hamlin still might sneak into the Chase, he was caught up in that final-lap accident. So, you know, sometimes, it’s just not your day.

I didn’t like it when NASCAR announced earlier in the week and I didn’t like it when they needed it at the end of the race Sunday. The decision to have just one GWC finish was a bad one because no matter who you like or don’t like, it’s always better to see a race finish under green. It would have been nice to have that opportunity a couple of more times Sunday. It would have eliminated some of the debate about the Harvick situation and not left Junior fans thinking if he just had one more or two more chances at a green finish (like in every other race this season), the drivers in the final eight would have looked at least little different.

I don’t think the Newman “myth” of being steady is entirely accurate. He got what he got due the misfortune of others. Attrition.

I’ve noticed that too. He kind of hangs around and then shows up at the end when everyone else has raced themselves into problems. I guess if it works and it’s not against the rules then more power to him but he doesn’t battle his way to good finishes, he more or less takes advantage of opportunities to get good finishes.

“You know, Kevin, if there’s a yellow during the white flag lap the field is frozen.”