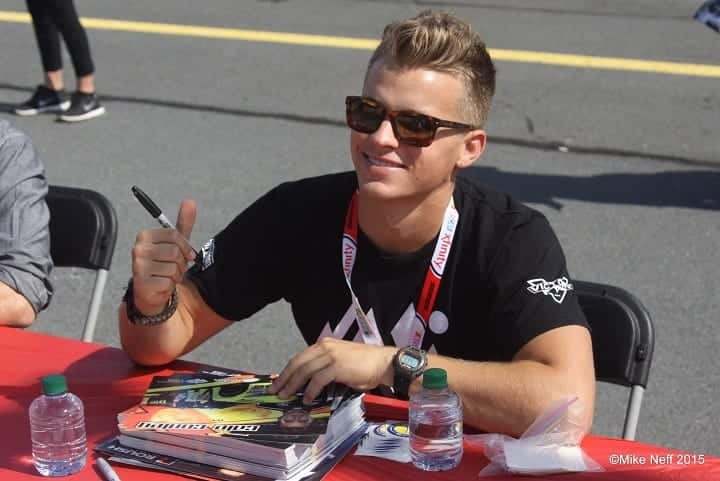 Cale Conley comes from Vienna, West Virginia and started his racing career in go-karts before migrating to quarter midgets where he won multiple races, championships and regional titles. The next step in his career found him in Kenyon USAC Midgets. After notching several triumphs there he made the migration to Outlaw Sprint Cars, spending a full two years touring the country in both All-Star and World of Outlaws Sprint competition while still plying his trade in the USAC open-wheel ranks.

Starting in 2011 Conley moved into stock cars by joining the K&N East Series, a division where he landed 12th in the final standings in 2013. 2014 saw him run 11 Xfinity races for Richard Childress Racing in their No. 33, scoring a top-10 finish at Kentucky Speedway while catching the eye of other owners willing to run him full-time.

This year, Conley has been doing just that, running a full season with TriStar Motorsports in the No. 14 carrying sponsorship from IAVA (Iraq and Afghanistan Veterans of America). He has had an average finish of 25.3 and has been running at the end in 22 of 30 races, building experience while hoping to build a long-term career in the sport.

Conley sat down with Frontstretch at Charlotte Motor Speedway before the Race for the Cure 300 to talk about his season and his life outside of the track. The topics include racing for his family, exercising, home schooling, favorite racetracks and maintaining one of the most impressive coiffures in all of racing.

Editor’s Note: Just after this interview was printed, Conley was released from his ride at TriStar. Click here for the story.

Mike Neff, Frontstretch: You’re running in the Xfinity Series this season just a few years after debuting in stock cars. Did you anticipate running at this level so quickly in your career?

Cale Conley: I did. I always dreamed of racing at this level. My number one dream is to race in Cup and win a Sprint Cup Series championship some day. I’ve never had a dream past that. My whole life has aimed toward climbing this ladder. I’m excited and very, very grateful to be at this level. I also know that this is just part of the climb. I’m focused on the future but trying to soak it all in at this time and learn as much as possible while enjoying the process. The ride sure goes fast.

Neff: You’re racing on a mile-and-a-half track this weekend. Most of the races you run in the Xfinity Series these days are about this length or longer these days in this sport. What is the biggest difference for you in running a stock car around a mile-and-a-half oval versus a half-mile or less?

Conley: Aero is the biggest thing. The cars act so different. You can enter the corner side-by-side, beat and bang all day at a quarter or half-mile track. You come to the mile-and-a-half tracks and you want to try and leave some space between you and the guy beside you in the corner. If you get too close you’ll take his air, he’ll take your air and at least one of you will end up wiping out. You try to do that in the corner but on the straightaway you try to draft as much as you can and side draft. You use the air as much to your advantage as you can where on a short track that doesn’t even come into play. Air is the biggest factor and difference from short-track racing to big-track racing.

Neff: How does someone get from West Virginia to the national touring level of NASCAR? Was it a situation where you moved to North Carolina or did you get noticed up north and then move down south?

Conley: I ran sprint cars as part of a family-operated team. We owned the motors and the cars that I raced and ran that out of the back of a motor shop in Ohio. We sold all of that. It was family-funded all of the way when I was racing sprint cars. That is fairly cheap racing compared to NASCAR. You make pretty good money with the payouts. There was money coming in and a lot of money going out but it was good, hard, fun racing. I was learning a lot.

When we thought it was time to come down to North Carolina and pursue a career in this we knew we were going to run sprint cars for three years. After that, we were going to give it a shot in the Carolinas. I was always ready and waiting, waiting, waiting to move down and give it a shot. We sold everything we had, midgets, sprint cars, and bought a couple of old Nationwide cars with the old style body. We converted them to K&N cars and we were out to lunch. We were terrible and learned fast how technical this NASCAR stuff is, with the front end geometry and everything it takes to be fast in these cars. Luckily, we got paired up with JTG in 2012 and race K&N out of the Cup shop there.

We did really well. Sat on three poles and won a race doing a part-time schedule just running half of the races. From that point on, that kind of helped me advance up the NASCAR ladder. I definitely wouldn’t be to this point without family support and support from some great sponsors. It has been a long ride and I’m just grateful and happy to have experienced it all and I am excited for the future.

Neff: Looking back on your high school days, because those were so long ago for you, what was the most important thing you learned then that translated into your racing career?

Conley: I spent my last year of high school home schooled just because of all of the traveling we did with sprint cars. I missed way too many days my junior year and way too many days my sophomore year. That is why we decided to pull me out and do school on the road. Looking back at high school, I have a lot of regrets. I missed so much and I wish I would have put more focus into it. Especially when it came to stuff I look at today. Simple math or reading (laughs), if I had only paid attention a little more. The number one thing I really regret is typing. I’m a poker, not a typer. I really need to get adjusted with my hands on the keyboard. That is just a crucial part of any childhood advancement to adulthood. It is a given and I think many adults look back and wish they’d given it 100% more effort at school when they had that opportunity instead of just using it as a hangout session. I went to a big high school in West Virginia. It was a lot of fun. It seems like yesterday and I miss those days.

Neff: What is your favorite kind of music?

Neff: What is your favorite dirt short track that you’ve ever raced at?

Conley: You would consider it a short track at this level because it is a half-mile but in the dirt days it was a big track. Knoxville and Eldora, those were big tracks I really liked out on the dirt. I really liked racing at Attica Raceway in Ohio. A very fun little place. There is a track called Atomic in Chillicothe, Ohio. When I raced there it was called K-C Raceway; now, it is called Atomic. It was fun and I raced there a lot. On the asphalt side Gresham, in Georgia, that was fun. It is a nice, fast-paced place. Columbus in Ohio is where I got my first NASCAR win so that is always going to be one of my favorites. It doesn’t really matter what track it is. The goal is the same at all of them and that is to win.

Neff: What do you do outside of racing for fun?

Conley: I mountain bike and road bike. I exercise. I just got some rock climbing equipment so I’m going to get into that a little bit.

Neff: I’m sure your team owners are thrilled with that idea.

Conley: As long as the ropes work, it is all safe.

Neff: How much time do you spend on that hairdo in a given morning?

Conley: Not long. I have two cow licks on the sides of my head so I have no choice. I gel it up, put it up on the top and run the top side with the hairdo all day long.

….and too bad this guy is out of a ride and the likes of Elliot Sadler and Justin A. who have not elevated their game in all the years in Xfinity still have a ride. Boy this series is in trouble.