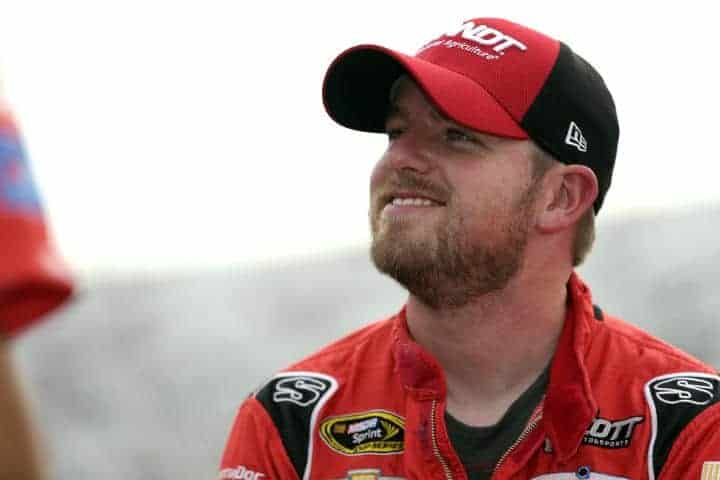 Allgaier will take over the reins of the No. 7 Chevrolet Camaro in the Xfinity Series starting at Daytona in 2016. The ride had previously been wheeled by veteran Regan Smith, who announced earlier this month that he would no longer be with the team after this season.

Longtime partner BRANDT will move with Allgaier to JRM for 18 races in 2016 and an undisclosed amount in 2017. The driver-sponsor pairing dates back to 2011 when Allgaier joined Turner Scott Motorsports. The two moved up to Cup in 2014 on a full-time basis for HScott Motorsports.

Additional sponsorship will come from TaxSlayer.com, Breyers, Hellmann’s and Suave.

Allgaier has had a rocky start to his Cup career, scoring only one top-10 finish, and said he hopes that by joining the powerhouse JRM team he can revitalize his career in the NXS much like Brian Vickers and Sam Hornish Jr. have in recent years.

“Having the ability to come to the track every week with a car capable of winning races and ultimately run for the Xfinity Series championship is the opportunity of a lifetime,” Allgaier said. “And to have the support of BRANDT as we move to JR Motorsports means a lot to me, personally and professionally. It’s now time to get those BRANDT colors back up front and try to bring home a championship that they so very much deserve.”

Allgaier has three career NXS wins, 29 top fives and 84 top 10s. He will be joined in the JRM stable next season by Elliott Sadler, who will move into the No. 9 currently run by Chase Elliott. A third car, the No. 88, will be shared by Elliott, Dale Earnhardt Jr., Kevin Harvick and Kasey Kahne.

Cale Conley a young upstart, Regan Smith, James Buescher etc. are all of rides. Justin A. has done squat in 6 years in Natonwide, is a problem in Cup and he gets a ride with JRM. Elliot Sadler who by rights should have hung it up some time ago and be happy as a pit reporter for the Camping World series, and he has a ride. They are reusing the same useless drivers that don’t add any value to the sport.

isn’t that who clint bowyer will be driving for in 2016?

got the ride cause he brought sponsor with him.

Didn’t Allgaier’s motor shotgun when Jr. was a lap down at Dega?

Long gone are JRM’s lofty stated goals of providing a chance for “up and coming young talent” Now its about paying the bills. Idealism once again replaced by the stench of truth.

JR Motorsports spokesperson said at the beginning of the 2015 season the 88 car would only be driven by Dale Jr. Why has that changed and why no explanation from Frontstrech.