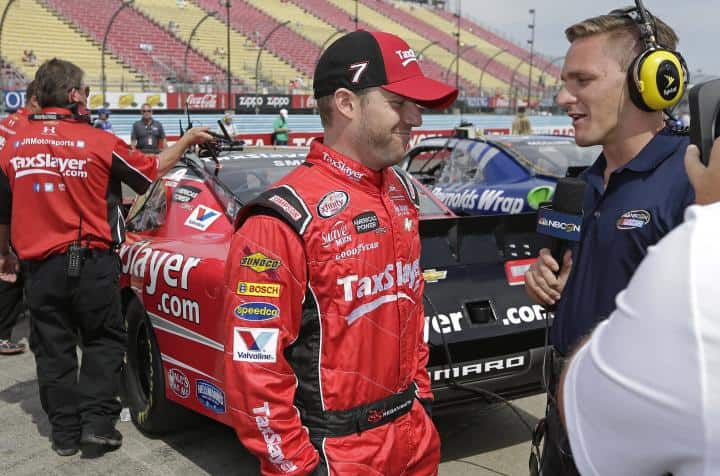 Whatever side you are on, the biggest controversy lies in the first attempt at a green-white-checkered finish since the rules were not clear as to what an attempt was. Should the attempt have counted? I don’t think so. However, you can’t pass prior to the start/finish line and the leaders had not taken the green flag. I can’t tell you how many times I’ve been at a dirt track race and seen the restart waved off because the track didn’t like the start or restart. It may be a similar case at Talladega.

However, that rule was not clear prior to the start of the event, which confused fans, media members and drivers. That falls on the shoulders of NASCAR. Hopefully next time the sanctioning body will make an amendment to the rule and it will be clear for everyone. Now let’s answer some of your mailbox questions.

Q: Can you please share anything on where Regan Smith is going in 2016? Is the No. 9 team still on the table or is he now going to back to go carts? Hoping I’m going to watch NASCAR next year… Thanks. – Ken B.

A: Hi Ken, Thanks for writing in. Smith is in a tough situation heading into the 2016 season. He’s shown his talent at JR Motorsports the past few seasons but failed to attract a big-time sponsor to link with him for the future. If you look at drivers like Elliott Sadler, Brian Scott and Chase Elliott, all of those drivers, for one reason or another, have sponsorships tied to them. That is key in the NASCAR of today. Sponsors used to link with car owners and teams. Now they link with drivers. Even Justin Allgaier is in a better situation than Smith because he brings BRANDT with him wherever he winds up next season.

To answer your question completely, I think Smith’s game plan changes. He’s still a contender in my eyes to drive the No. 9 car at Richard Petty Motorsports next season, but has to compete with several drivers for that ride including David Ragan and Chris Buescher. If that doesn’t happen, Smith’s options are limited. However, he must continue to get seat time, and that may mean he is forced to take a ride that is less competitive than the one he is currently in. That is probably his best bet, although we’re not really sure what kind of Xfinity rides are out there yet as their silly season starts a little later than the Cup Series.

Q: Hello, I just saw that the schedule for the 2016 season was released with little changes and I’m annoyed. I want to see NASCAR have more short-track races and less cookie-cutter tracks. Will there be a day where that will happen? Thanks- Shawn K – Nashville, Tenn.

A: Hello Shawn and thanks for writing in today. There is no doubt the amount of 1.5-mile tracks on the NASCAR Sprint Cup Series schedule is ridiculous, but I don’t think we’re going to see a change anytime soon. When the schedule was announced Monday, there was also an announcement that the tracks reached a five-year agreement with NASCAR, which means we won’t see any major changes on the schedule until the 2021 season at the earliest.

What I think is hard for some fans to understand is owning a race track in NASCAR is big business. The majority of tracks are owned by two companies, International Speedway Corporation (ISC) and Speedway Motorsports Incorporated (SMI). If you look at the 2016 schedule, ISC will have 19 points races and SMI will have 12 points races and the All-Star race. The schedule will stay that way through the next five years to ensure these companies will not lose money by owning a track that doesn’t get a date.

So the short answer is the only way a track like Road America or Iowa Speedway gets a date on the NASCAR Sprint Cup schedule is if they are bought by one of those two companies. Or unless one of the other independently owned tracks (Dover, Pocono & Indianapolis) lose a date.

Until that happens I doubt we see any changes to the schedule anytime soon. At the end of the day, like anything in life, it all comes down to money and not which track puts on the best show. It’s unfortunate but that’s the truth.

you are right that NASCAR won’t make any changes to the schedule except for a minor date change here and there. The overabundance of 1.5 mile tracks combined with the major issues with aerodynamics has produced the worst racing ever – notwithstanding Brian France and his idiotic comments about how “exciting” it all is. He is so clueless and uninformed about what people are actually saying about NASCAR it is striking. Of course he and others get most of the $ from tv contracts and sponsorships so why should they care if anyone actually enjoys watching a race on one of these tracks any more? They get paid whether there are people in the seats or watching on tv or not.

I think many fans would like to see more short tracks and more road course and less of the dull D’s but no one cares what we think.

The head people think NASCAR is an oval sport and the Indy cars for example, are better at road races than the big, bulky stock cars could ever be, all because the open wheel cars, like Indy are smaller. They probably do anyway. JMO.

NASCAR is on the same path that happened to Indy car. What ever happened to all the money NASCAR was saving the owners? This is a huge money sport and its has made some decisions that are more like a local carnival than a national touring sport. The fans at home (what few are still watching) are very unhappy with the way the broadcasts are being done. For too long the audio was given more priority than the visual, driver and team stories have taken a back seat to the endless “expert” analysis of the retired drivers. Jeff Gordon will shove DW out of the booth in two years, maybe FOX will change its foolish nonsense and just let the racing be the show instead of their group of what has been and is no longer relevant analysis. After a while it just gets stupid. BOOGETY BOOGETY BOOGETY

Oh joy. Only minor changes to the schedule and 5 year contracts locked in for the future. If they don’t get this aero package right, these tracks aren’t going to attract enough fans to be solvent before the 5 years are over. But then again, maybe the closing of some of these 1.5 mile tracks will force nascar to go to more short tracks. I can dream at least. Regardless Nascar doesn’t care about the tracks except their own. The majority of their money comes from TV, so the check has already been cashed. Nascar is so far from its roots now that it is almost comical if it wasn’t so sad.