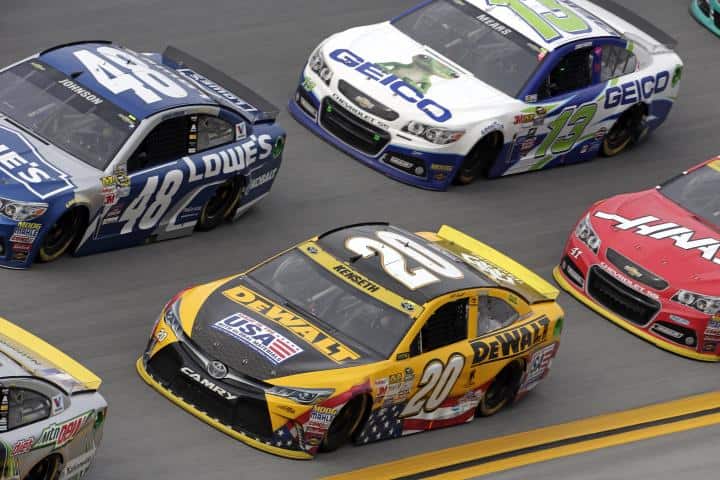 Last weekend’s CampingWorld.com 500 at Talladega Superspeedway was met with many emotions. From long green-flag runs to emotional outbursts to parts failures to the Big One, and even confusion, drama and frustration, the race had it all. But fans, drivers and media alike were left scratching their heads, trying to figure out what they had just witnessed. As Martinsville quickly approaches, I’ve tried to bring the answers everyone is looking for, even if they’re not the ones people are looking for.

FACT: Talladega belongs in the Chase.

Based on the rumblings that got louder and louder as last weekend’s race at Talladega Superspeedway approached and those that have continued this week, I obviously don’t have a very popular opinion in this category. Many have complained that it’s not fair to have a game of chance in a spot to determine whether a driver moves forward in their quest for a championship, however the same can be said for any other track on the circuit.

Sure, a place like Talladega where the racing lends itself to tight packs, racing within inches of each other widens the reality that a small mistake by another driver can end the day of a competitor, but NASCAR is built around chance too. From the setup the teams prepare during practice prior to the race, to fuel-mileage strategy to choosing to take two tires rather than four, every decision made comes down to the chance that it won’t work properly, which could just as easily derail a team’s championship efforts.

It’s simple really: all 12 drivers trying to make their way into the Eliminator 8 – or any part of the Chase actually – have the same chance at getting involved in the big one as they do having a part malfunction (see Denny Hamlin‘s roof hatch or Jimmie Johnson‘s axle seal), regardless of what race it is. There are already mile-and-a-half ovals and short tracks in the 10 races that make up the Chase, and a superspeedway needs to be there as much as a road course does (though that’s a story for another day).

After all, don’t we want a champion that’s the best of the best at each of the types of tracks the series races on?

FICTION: There were two green-white-checkered attempts on Sunday.

The NASCAR world went into an uproar when the sanctioning body announced the week of Talladega that green-white-checkered finishes would be limited from three attempts to just one in the wake of the airborne crashes that have – sadly – become the norm. It was a valid reason to limit the amount of time the race was extended, but wouldn’t you know, it still came with controversy.

After the Truck Series race on Saturday ended within half a lap of the green flag flying for the GWC, I expected pretty much the same thing in the Cup race. But what I didn’t expect was the confusion when the caution flag flew before the field even crossed the start/finish line and the lineup was reset, minus the cars that were involved in bringing out that caution.

And that’s where the confusion comes in. Many say that because the green flag was in the air, that was a GWC attempt and thus should have seen the field run the final two laps under caution to crown a winner, but NASCAR deemed that the field never restarted and therefore, it was not an attempt.

Despite the confusion, it’s really a black and white issue that should be rather simple to sort out. In the NASCAR Rulebook, section 10.5.2i states “scoring and the required race distance begin when the leader crosses the start/finish line after the starting flag is displayed.”

There you have it; simply put, Joey Logano, who led the field at the time of the incident in question, did not cross the start/finish line, and therefore scoring had not begun. And whether the majority agrees or not, the sanctioning body nailed the call to line the field up and proceed with a GWC finish.

FACT: Dale Earnhardt Jr. should be commended for his post-race comments.

When word came from NASCAR that Logano was ahead of Dale Earnhardt Jr., fans wasted little time heaving beer cans and whatever other trash they could find over the catchfence to show their displeasure. But despite being credited with a second-place finish that knocked him out of the championship battle for this season, Earnhardt was full of smiles and an incredibly positive attitude.

“I’m going to get asked about the green-white-checkered rule, which I’m fine with it,” Earnhardt Jr. said in his post-race media availability. “I feel like no matter the rules, when the race is over, I can live with the result as long as everyone else is going by the same rules. So I felt like, per the rulebook, it sorted out and I finished second. I’m okay with that.

“We could argue they could have waited another hundred foot to throw the caution, but they didn’t have to. They threw it when they needed to. I’m fine with that.”

So here you have a driver at the age of 41, quickly approaching the timeframe in which a couple of his fellow competitors have made the call to hang up their helmets (see Jeff Gordon and Tony Stewart who will retire at age 44 and 45, respectively) no longer able to compete for the Sprint Cup championship this year, and instead of complaining that it wasn’t fair or that something should have been done differently, he looked at it in a positive light.

I’m sure if you asked him, Earnhardt would love nothing more than the chance to win the championship this season, but he quickly accepted the reality that this year just wasn’t his time. If everyone could take a potential negative and put a positive spin on it, much of the complaining in NASCAR wouldn’t even exist.

FICTION: Kevin Harvick intentionally caused the wreck that ended the race under caution.

It doesn’t matter which replay you watch; it’s very clear that Kevin Harvick initiated the contact that brought out the caution almost immediately after the green flag flew for the final time on Sunday, and that’s not really the issue in question here. The accusations actually point to the defending champ as guilty of intentionally causing that caution to save his own Chase chances since he was having some sort of an unidentified problem with his motor.

You have got to be kidding me!

Obviously, Harvick knew he had an issue and he had dropped back in the pack a bit, hanging on to the draft only thanks to teammate Danica Patrick, who managed to help enough to keep him in there. He and crew chief Rodney Childers talked on the radio about the strategy to pull out of the way on the restart.

Everyone knows what happened next as Trevor Bayne went spinning off of Harvick’s front end, starting up the melee that ultimately ended the race under caution.

“It wasn’t running really well on the restarts. Then at the end I was trying to get out of the way,” said Harvick. “I don’t know if I clipped the [No.] 6 (Bayne) or if he came across as I was coming up. It was one of those days where everything went well until the very end until the bottom fell out on those lap couple of restarts when it cooled off. It has a broken exhaust pipe or something.”

While many maintain the that contact was 100% intentional, keep in mind just how limited the visibility is for the drivers with the headrests and helmets, along with the HANS device that helps to keep their bodies in place in the event of an accident. It’s absolutely plausible Harvick couldn’t even see Bayne, and as fast as things happen on the track, it’s likely his spotter didn’t even have a chance to let him know that Bayne was to his outside.

As far as whether NASCAR should have pulled Harvick from the field, that’s ridiculous. His car wouldn’t go, but the No. 4 was maintaining caution speed and wasn’t dropping any fluid on the track. That’s like pulling someone over and giving them a ticket because they said they were going to speed when they got on the highway.

Let’s get this straight. Intentionally wrecking another competitor at a place like Talladega is just plain stupid and incredibly dangerous, even if the field is just coming up to speed, and I’d like to believe that all of the drivers on the track are smart enough to know that. In the end, no one but Harvick knows what really happened on that restart, but NASCAR has made its ruling and it’s time for everyone to embrace it and move forward to this weekend. If there was funny business going on with the No. 4 team, the racing will take care of itself.

The only point I even remotely agree with you on is that Dale Jr’s post race comments showed a lot of class. The rest of it is more BS than I can deal with in one article.

S there be a plate race in the chase? Definitely, but because it is such a crap shoot it should be early in the chase so a driver has a chance to recover from the “big one”. There should also be a road course in the chase.

Was thinking the same thing reading this. I don’t think the issue is that this race is in the Chase, although an argument can be made for why it shouldn’t, it should at least be early in the Chase.

Once again the media giving Harvick a pass. What made me determine that he did do it on purpose is the fact that he ran and hid after the race. So much so that Nascar couldn’t find him to talk to him, so he last all benefit of the doubt at that point. If he stayed and talked to the media and Nascar to give an explanation of his side of the story, I might have believed him, but him running like that just shows how guilty he was. It amazes me of all the punk moves this guy makes on and off the track, the media still gives him a pass whenever something happens. SMH

I gave the writer the benefit of the doubt…. We can have a difference of opinion on these issues… Until she defended Harvick. Even Kevin has changed his tune somewhat since he found out Nascar would not penalize him. I agree with what Bill B has been saying all week….. Harvick is a punk.

There were two attempts at a GWC finish, but only one official restart. It’s semantics.