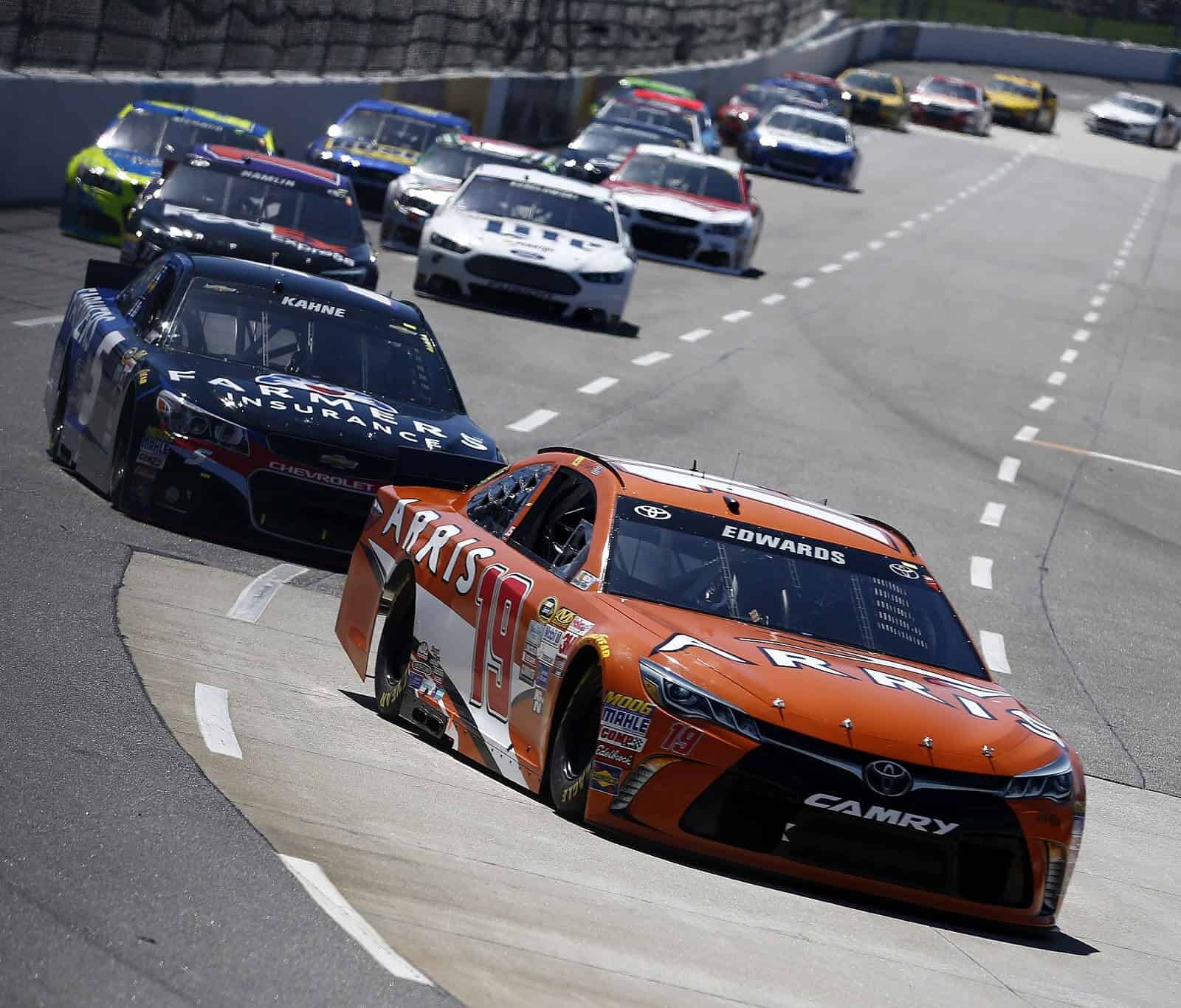 1. Will Talladega drama carry into Martinsville?

Since the Chase opener at Chicagoland Speedway, we have witnessed an uptick in thrill, rage and turmoil while bringing along a frenzy of buzz through the veins of NASCAR nation. From driver-to-driver beefs to a mass of controversy following the closing laps at Talladega Superspeedway last week, there is plenty to watch out for in the 500 laps of racing at the schedule’s shortest track.

While only three of the current eight Chasers have conquered the half-mile track in the past, that statistic may not matter as the Chase field is drawn even in points once again.

The transformation from the largest circuit of Talladega to the smallest of Martinsville Speedway is quite the alluring case, especially when they populate two crucial spots on the Chase calendar.

Though they are polar opposites regarding their layouts, the same type of Talladega-like unknown can be showcased at Martinsville.

Kurt Busch recently spoke to similarities between each track in terms of the lack of control during the race. The two-time winner at the Virginia track pointed out the conveyor-belt style of racing that can lead to chain-reaction accidents and payback between drivers that can swallow up others (insert Matt Kenseth and Joey Logano here.)

Indeed, that will be one ongoing story to follow intently on Sunday as the two have expressed enough verbal plays to fill a Broadway theater. From the contact two weeks ago for the win at Kansas to the minor brake check on Logano’s part while entering pit road at Talladega, Kenseth is understandably and undoubtedly heated.

What better place to bring bitter feelings to a track that has seen nearly 150 cautions in the past five years?

2. Would you rather be first or second in the final 30 laps?

It’s one of the reasons the Paperclip has had its spot on the NASCAR Sprint Cup Series calendar every year since 1949.

The melee in Martinsville features late brawls for the top spot while the rest of the field attempts to grab the precious traction to gain spots for themselves. It’s essentially two drag strips connected by U-turns that breed aggressive passing and the expected and ever-so-beloved bump-and-run maneuver.

With all this aggression sparking from second place on back, it’s obvious the best spot to be is in the lead, right? Well, not as of late, as the numbers and memories may show.

In 10 of the last 11 Martinsville races, the final pass for the lead occurred in the final 30 laps. Four of those happened in the last five laps, which proves that the race leader is an easy victim in the closing stages at Martinsville.

Even with strategy playing a factor in last year’s Chase race, Dale Earnhardt Jr. restarted fifth with five laps to go on fresh tires, charged to second after half a lap before bumping race leader Tony Stewart out of the way to take the victory. That finish also, ironically, showed a similar fate between Earnhardt and teammate Jeff Gordon, who had to win Martinsville to advance through to Homestead. Jump to last week at Talladega, which saw Gordon bump Logano to the eventual win when Earnhardt needed the checkered flag to advance.

From Stewart to Jimmie Johnson, Gordon to Kevin Harvick, they have confirmed the importance and unpredictability of the last 1/16th of the 500-lap event.

Many will ask if Hendrick Motorsports’ Martinsville dominance ever went anywhere. Johnson and Gordon – who each have eight Martinsville clocks – have won nearly every race here since the 1990s.

However, upon further examination, Hendrick Motorsports saw no wins in six races between 2009-2012 and have only four victories since 2009.

I know I might be barking at a toy car, as Gordon is, after all, Jeff Gordon – the only remaining Chaser for HMS who has made it to this point by consistency.

With eight Martinsville wins, the 44-year-old has also led more than seven times as many laps as any other current Chaser and has been keeping his excitement and confidence no secret.

Not long ago the No. 24 team was scratching and clawing its way into this Chase, and now Gordon has transformed into a legit contender for the championship.

Johnson is still in spoiler mode as Mr. Six-Time has every hope to return to Victory Lane for the first time in nearly five months, and Kasey Kahne has similar dreams of cleaning his first Grandfather Clock.

Earnhardt may have the letdown of Talladega still on his shoulders, but the driver has the momentum of last year’s Martinsville win along with the passionate Junior Nation by his side.

4. Will Martinsville provide another strong run for Danica Patrick?

Besides August’s announcement of Nature’s Bakery coming on board for 2016 and beyond for her No. 10 Stewart-Haas Racing Chevrolet, there hasn’t been much talk surrounding NASCAR’s gal in green, Danica Patrick.

Sitting 23rd in points with just three top-15 finishes in 2015, the improvement for the 33-year-old has been middling.

For Patrick and her lackluster 2015 campaign, Sunday could be the perfect time to return to a track she has shown steady and consistent pace in all five of her starts.

Her first Martinsville race in 2013 saw her start from the 32nd position, which turned into two laps down with a damaged race car early. What followed was a notable charge back to the lead lap and into position for a top-10 finish, coming home 12th.

The following race saw a 17th, which may not sound superb, but with a season that saw only seven top-20 results in 36 races, it was a change in direction for Patrick.

2014 saw a top-10 qualifying effort in the spring and a strong run in the fall before a multi-car crash took the pink Chevy out of contention.

It wasn’t until the most recent race at the half-mile track in March before there was a real head-turner from Patrick, as she drove to a seventh-place finish – not only her best result of the season to date, but also a run worthy of a sponsor in TaxAct to jump on board for the following race at Texas Motor Speedway.

Additionally, Patrick had a ninth at fellow short track Bristol in April.

While little potential has been exposed in the past few months, the short confines of Martinsville have shown that scarce raw speed out of the No. 10 machine. I won’t say Sunday will be her final shot at a top five or better for this year, but on behalf of the numbers and the attitude entering this weekend compared to most, it very well could be.

“and now Gordon has transformed into a legit contender for the championship.”

Everyone here knows Gordon is the only driver I care about and the only driver I root for but this statement is idiotic. The only reason Gordon is a legit contender is because the championship is illegitimate. There are only two legitimate contenders left, Logano and Harvick (and Harvick would have a snowball’s chance in hell at 50 points behind with 4 races left), the other 6 are only contenders by virtue of this idiotic format and a healthy amount of free points that goes with it. With that said….
Go Jeff!, someone has to win this crapshoot of an illegitimate championship so it might as well be you.

(sigh) Bill B, I have to agree with you about the legitimate contenders and I wish I didn’t, but like you, I’m still hoping Gordon pulls it off and wins the crapshoot trophy.

At face value Danica’s stats look OK at Martinsville. I’ll bet if we dissected those stats that we would find lucky dogs and wave arounds and possibly an alternative strategy forced by circumstance but you are right, it’s one of her best tracks. Stats are so convoluted nowadays it’s difficult to make sense of them.

No, P1, no, yes.
Everyone thinks it will be a powder keg. I think , if for no other reason than that alone, it won’t be! Ha! Har-ick will be out early, rest of the Chasers will be overtly cautious, the others will be petrified of mucking with Nascar’s chosen ones, a few ruffled feathers amongst the regulars, but nothing highly irregular.
P1, as if any other position were better? We are talking about racing, yes?
HMS, the new RFR, have not dominated anything this year. #48 hit a few strides in the first 1/3 of the season, but has been ambient lately. They won’t win again this year & #24 won’t advance.
Beat up the girl all you want, but that won’t change the fact that she is presently ahead of her BF & her boss (in points) so I think her relatively respectable & mildly impressive results will continue.