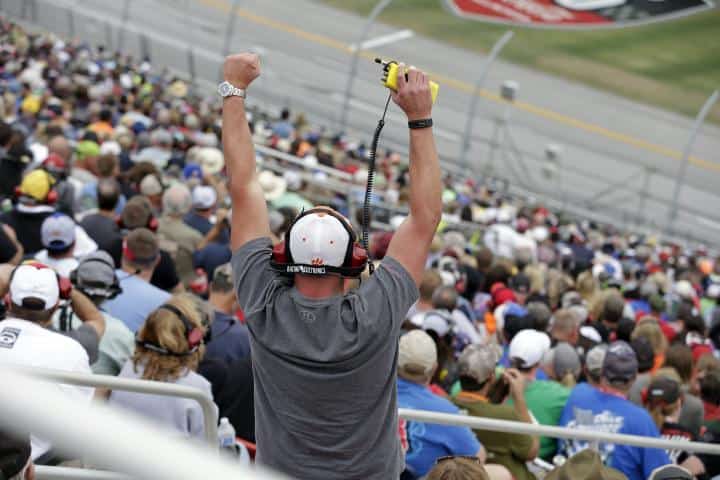 As NASCAR heads to one of the last tracks to survive since the earliest years, there’s so much to think about: the Chase and the drivers in it, the dearth of passing this season, what’s coming next year. Watch a race broadcast and you will see all of these and more throughout the program. In fact, you’ll see so much of it that at times, it overshadows what you tuned in for in the first place: the race.

In the Chase era, most races, even early in the season, have a Chase spin on them: who can win their way in? Whose chances are growing dim? Oh, he won, he’s locked into the Chase. He’s a title favorite. He better get his act together or he’ll never contend for a championship. And on and on, until the Chase is everywhere, dominating every broadcast.

With so much else happening, it’s easy to forget that on Sunday afternoon, between the green and checkered flags, there’s a race going on. In their championship quests, many top teams seem to have forgotten as they work on making the Chase or testing for it once they’re in. The television broadcast is centered on a few teams, mainly title contenders, whether or not they are racing anyone. Many times, viewers miss a fierce battle for position because of this.

That used to be enough. Broadcasts focused on the race itself, and fans didn’t complain that nobody was talking about championship implications in April. Teams cared, but they knew there was a long way to go and many races to try and win to get there. The championship was there, in the background, but it wasn’t front and center; the drivers doing battle on the track were, even if they weren’t in the title hunt at the time. If they were having a good race, or made a strong move or a spectacular save, it was duly noted by all. The leaders certainly got more attention; that’s just part of the game. But if one of those leaders was someone not considered a title favorite, that was okay; he still got his due time.

Racing, for the most part, wasn’t built on championships, but on individual races, on wins. Championships were (and still are, at local levels) a nice feather in the cap, but winning races paid the bills. NASCAR’s emphasis on winning titles, and the huge payout that comes with it, has been largely detrimental to the individual races, and television has only compounded that.

Rules packages aside (yes, this year’s was a flop and the racing suffered), racing doesn’t seem very dramatic if every race is centered on a few of the drivers who have title hopes and chiefly on those hopes. There’s so much drama during every race that’s overlooked and buried by the same talk over and over and over again. There are a dozen races within the race. Teams are fighting handling woes, mechanical issues, driver issues. Someone and his crew chief aren’t getting it done and the frustration hits a fever pitch. Someone else is battling for his ride and having a great day. Yet another races with a heavy heart after a loss. But how often do you hear these, the real stories, during a race broadcast? It’s not very often.

Each and every race has so much to offer. There’s the moment of perfect possibility before the green flag drops, and 43 compelling storylines after it does.

At one time, fans didn’t watch for a few drivers and the Chase. They watched for the race itself, for the ups and downs and the drama they created. They rooted for their driver passionately, but were aware of much more during the event. If their guy had a brewing issue, they watched with bated breath to see what would happen, not how it would affect his title hopes, unless it was late in the season and the points were tight. Sometimes that happened, sometimes it didn’t. Most fans didn’t care; the races themselves were the draw, not the points.

Racing is such a sensual sport that focusing on a single aspect, or a very few aspects, is detrimental to the experience. Fans should have the opportunity to watch a race and feel elated if their driver is having a great day and heartbroken if something is going wrong. They should be able to watch and believe their guy can win the race, championship be damned. It was a breathtaking experience of sound and fury and individuals.

But in today’s NASCAR, that’s all but gone. Fans are told who to watch, what they want to see, how they want to see it.  The Chase has overwhelmed the importance and excitement of the individual race.

We used to watch a race for what it was. When did we expect it to be more than that? When did the hype overtake the real stories and the compelling moments? How did the joy of watching a race for a race became frustration of seeing the same broadcast over and over, like a record with a bad skip?

What happened to the races, and how do we get them back?

The premice of this article. If you could call it a thought. Are wrong. (WRONG) The races today are way better you ignoramaces. DATA backs me up, look it up yourselves lazy ass’s. Just because I call the elite barcolounger crowd who bitch’s about everything INCOMPETENT does not give you license to smudge my name “Nit Nicauflin”. And you too Nit’s Ninions! And too Nit, recently you broke so many company policies not to mention state and federal laws with that so called comment you wrote and how you stole that info and what you were smoking in the parking lot that you better hope they have NBCSN in the county jail. Bring some axle grease. Its on like donkey Kong and I’ll be having that front row parking spot at HQ.

Bill B
Reply to  Jordie Gerald

“What happened to the races, and how do we get them back?”

That’s actually two questions:
What happened to the races? Brian France
How do we get them back? Get rid of Brian France.

Good column, Amy. Yes the demise of the season being about individual races has changed NASCAR forever and not for the better.

Bill B has the answer.

Unfortunately BZF isn’t going anywhere. Can someone please buy him a football franchise on the West Coast to play with and maybe he’ll go away.

I’m sure he would try but I think he’d have a lot more difficult time maneuvering his crap thru the NFL. There are more owners he’d have to contend with instead of being large and in charge which is his inherited role in NASCAR.

Would the other owners approve his purchase of a team? Probably, he’s actually a pretty good marketing guy. And since it wouldn’t be the family business it would be interesting to see what he would do.

I thought about this the day last week that marked the 15th anniversary of Dale Sr’s last Cup win at Talladega and how that stood on its own and not within the context of something.

All we here (Fronstretch in particular but MANY others as well) is complaints about-The”Chase”-“Lucky Dogs”-“Wave Around”-Consistency in Rules(last one has at times made nascar a laughing stock-brian). Some of these are evolution some actually help some not so much & some get in the way. The BIGGEST issue Nascar has gotten wrong is the on track product is awful, combined with cookie cutter Dull-D’s. The aero push car is dull to watch, the “Racing has gone to Krapp. Until that is corrected the rest doesn’t really matter. The on track Product is whats missing the most(I can say this as I am not a driver or team member) As the cot junk developed while brian tried to become F1 (or golf or NFL) His gimmicks & kneejerk schemes are driving people away(Live & TV) in droves but the casinos are doing ok(cause I always look for a casino while at a race-NOT) Bad rules-ruling etc have brought this sport down to where they think all these gimmicks are required.
Fix the Racing & then worry about the rest-Lose aero-Mechanical grip-Keep the HP-Let the drivers/et al speak freely. Then fix the rest(oh yeah lose brian) His Dad & Grand Dad must be so disappointed in this out of touch boy. Read an article the other day that questioned wether nascar will even exist as a national event in 10 years…At present I suspect he was right to question this…brian may react once it is to late which is what I have come to expect from the out of touch spoiled kid.
Best to All

Sometimes success can be a double edge sword. A case could be made that it was the incessant marketing, which brought in the big dollar sponsors, which enabled the growth of the megateams. To keep them, and their money, there was a need for a mechanism to fuel the chatter beyond the individual races. Thus the Chase.

Of course thats only my opinion I could be wrong.