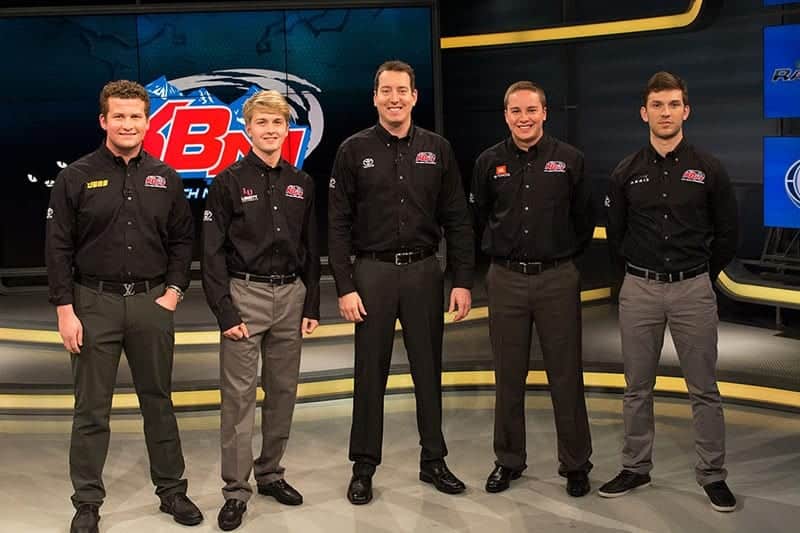 On Thursday night’s episode of NASCAR RaceHub on FOX Sports 1, Kyle Busch Motorsports announced its plans for the 2016 Camping World Truck Series season, and once again the organization plans to field three full-time trucks. USAC standout Christopher Bell and 2015 K&N Pro Series East champion William Byron will both compete full-time, while the third truck will be split by Cody Coughlin and Daniel Suarez.

“It’s rewarding for Samantha and me to see that over the past few seasons KBM has become what we envisioned it would be when we got started back in 2010 – a place where young drivers have the opportunity to showcase their talents and develop the skills necessary to be successful on and off the track, team owner Kyle Busch said. “Thanks to all of the hard work that everyone at KBM and KBM Chassis has invested into our success and the strong partnerships we have with Toyota and TRD (Toyota Racing Development), we have proven that we are capable of winning races and competing for championships with up-and-coming talent behind the wheel.”

Bell, who will carry primary sponsorship from JBL, has driven in five races so far this season, split between the Nos. 51 and 54. The highlight of the season was the 1-800 CarCash Mudsummer Classic at Eldora Speedway, where Bell outdueled MB Motorsports’ Bobby Pierce to take the win. Bell also finished fifth on debut at Iowa Speedway in June.

“I’m excited for the opportunity to drive a Toyota Tundra full-time for Kyle Busch Motorsports in 2016 and very thankful to JBL for making it possible,” Bell said in a team release. “I’ve learned so much already this year in my first handful of Truck Series races and I know that with all the tracks that I’ll be racing at for the first time next season I’ll have to do my best to continue learning on the fly. With the staff that KBM has in place and the technology provided to the team by Toyota Racing Development, there’s no reason that I shouldn’t be able to run up front and compete for wins on a consistent basis next season.”

Meanwhile, Byron, who drove the No. 9 Chevrolet for HScott Motorsports with Justin Marks, claimed the points lead very early in the season and racked up four wins, five top-five and 11 top-10 finishes. He also made one start in the K&N Pro Series West in the Carneros 200 at Sonoma Raceway, where he finished fifth after starting second.

Byron, who will turn 18 during the offseason, has never raced in the NCWTS, but he will get his chance to try a Toyota Tundra out prior to 2016. As part of the announcement, Busch announced that KBM will field a fourth truck for Byron at Phoenix International Raceway in November. Liberty University will stick with Byron for his Phoenix debut, and for 2016 as his primary sponsor.

“I’m so fortunate and excited to join KBM next year as a full-time driver for the organization,” Byron said. “It’s a dream come true for me to race in the NASCAR Camping World Truck Series, and to have Liberty University on board makes next year very promising. I can’t thank Kyle and everyone at KBM enough for this opportunity and I’m looking forward to getting things started with them at Phoenix in my first race.”

The third truck that will be shared by Coughlin and Suarez is expected to compete full-time also, and while it’s currently unclear which events each driver will run, the team indicated that both drivers will compete in at least ten races in 2016.

Suarez has driven the No. 51 part-time in 2015 in order to gain more experience while running for Rookie of the Year in the Xfinity Series. In nine starts, Suarez has five top-five finishes and eight top 10s. His best finishes are a pair of seconds at Dover and Texas. When Suarez drives the truck, sponsorship will continue to be provided by ARRIS.

“I’m very excited to be returning to Kyle Busch Motorsports for the 2016 season,” Suarez said. “KBM is one of the best organizations in the Truck Series and I really learned a lot behind the wheel of the ARRIS Tundra this year. I believe that the extra seat time I’ve gained by driving trucks has helped speed up my development as a driver and I look forward to continuing to grow with them next year.”

Coughlin, a Joe Gibbs Racing development driver who has spent much of the past two years splitting time between late models and the ARCA Racing Series presented by Menards. This year, he’s made two Truck Series starts: one with Venturini Motorsports at Kentucky in June and the other in KBM’s No. 54 at Michigan in August. Both starts were backed by JEGS and resulted in 20th-place finishes.

“I am looking forward to this opportunity with Kyle Busch Motorsports,” Couglin said. “I learned a lot by running the KBM truck at Michigan (International Speedway) in August; Kyle was really helpful at giving me direction and the team has a lot of great people working for it. I know with them behind me that we will have a great opportunity for success in the races that I get to compete in during the 2016 season.”

Sponsorship for Coughlin, as well as crew chief assignments and truck numbers are currently undecided.  They will be announced at a future date.