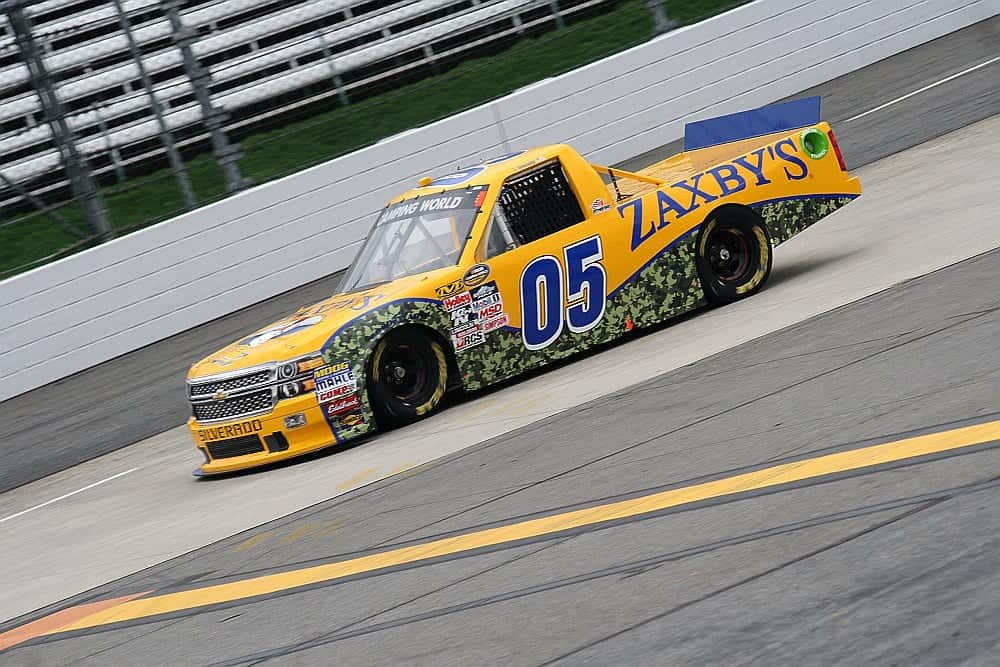 Martinsville Speedway’s NASCAR Camping World Truck Series races? Easily the best of any track on the circuit these days to both discover and watch young talent.

Which is not wholly surprising. Each season, it’s the first on the schedule that allows drivers 16 and 17 years old to race, and it’s also among the first tracks for which a racer can be approved, given its small size.

At the same time, both Martinsville races — toward the beginning and end of each season — are companion events to the Sprint Cup Series. Those aren’t generally the best races for both the Xfinity and Truck series since there’s a larger possibility of a higher series ringer moving down for the weekend and taking a ride that might have otherwise been filled by an up-and-comer. For whatever reason, Martinsville is often the exception to this rule, and one need not look further than this Saturday’s Kroger 200 as an example.

In fact, as far as the entry list goes, it’s one of the best showings in years when it comes to new drivers.

At press time (Thursday night), 37 trucks were entered for the Truck Series race at Martinsville this weekend (the Nos. 36 and 45 withdrew, but the Nos. 1 and 50 are at the track despite not being on the entry list). Of those 37,  27 drivers have joined the series sometime since the beginning of the 2013 season, or the last two years.

That’s nearly three-fourths of the field.

It’s a number that hasn’t been reached this season, or even in the past two. In fact, the 70% marker hasn’t even been reached; the most recent best came at this race one year ago, when 69% were newcomers.

New blood is, of course, nary a bad thing. And in the Truck Series, it was expected for a long time, given its hypothetical standing as a feeder series to the upper echelon of the sport.

But things don’t always work out that way. In 2013, the highest number of drivers attempting to make a starting grid whose debut had come in the previous two years (going back to 2011 in this case) was 53% at Bristol Motor Speedway. On average, the numbers jumped last year, when the 69%-of-the-field number at Martinsville was joined by a 65% showing at Phoenix International Raceway and numbers trending above 50% for the majority of the races – which is to say that most of the races had half of its entry list consist of newer drivers.

But in 2015, that number has dropped below 50% just a handful of times, with 46% the lowest mark (the season-opening event at Daytona). Races like the first Martinsville race earlier this season and the event at Canadian Tire Motorsport Park two months ago also trended high.

But 73% is a new high, and of that group, 19% (seven total) will make their first series start if their qualifying attempts are successful.

Two are looking good to do just that based on owner points: Austin Cindric, son of Team Penske president Tim Cindric, who will drive Brad Keselowski Racing’s No. 29, and Brandon Hightower, an entrant in the No. 08 normally fielded by SS-Green Light Racing but with help from MB Motorsports.

Then there are Brad Foy (No. 0) and Jim Weiler (No. 35), plus Ross Kenseth (No. 18), son of former Cup champion Matt Kenseth. Filling out that list are Paige Decker (No. 74) and Charles Buchanan Jr. (No. 87), both of whom have made attempts before but failed to qualify.

Add to that newer, sometimes already established competitors like Erik Jones, John Hunter Nemechek, Ben Kennedy, Cameron Hayley and more, and you’ve got a young-skewing — and in some cases inexperienced — entry list.

Now, once the green flag flies, 32 drivers will race, and there’s no question some of these up-and-comers will end up on the DNQ list — perhaps they’ll occupy all five spots. But even if that were to happen, that’s still 23 potential future stars of NASCAR who will be beating and banging their way to the front — or at least to a solid first finish.

Recipe for excitement? Maybe, maybe not. But if you want one of the most intriguing crops of new drivers in years all in one place, easily outnumbering the usual suspects, you know where to be on Saturday.