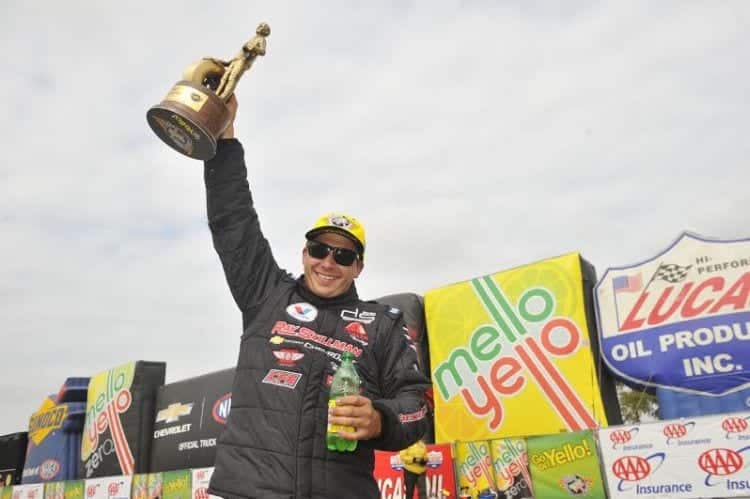 Voting is underway to determine the 2015 Auto Club Road to the Future Award winner in NHRA, aka the Rookie of the Year, as noted in our Pace Laps column the other day. One of our readers made an interesting observation about the six rookie drivers under consideration for the award.

What is it about NHRA drag racing that’s different? It would seem that racing is a young man’s game everywhere else. Consider that Jeff Gordon is retiring after this season and he’s 44, younger than two of the NHRA rookies, and just a hair older than two of the others. I asked 66-year-old John Force why NHRA seems to favor older drivers and he did point out that drivers only run for a few seconds, not for hours on end as they do in other forms of racing.

Combined with that observation, you have experience. Most of these drivers have honed their skills, reaction times and such, in the sportsman ranks for years before making it to this level. While youth and enthusiasm rule other forms of motorsports, it appears to be experience that is king in NHRA.

Or is it? Rumor has it that Skillman, the youngest driver nominated at 29 years of age (still old for a rookie contender in other series however) is the favorite to win it.

2012 – Won two races; No. 1 qualifier at Charlotte 2; won the K&N Horsepower Challenge, the youngest driver to ever do so.

Some things most people don’t know about Vincent: Racing is a family sport for Vincent, as it is for many other NHRA racers. His father, John, is also a veteran of the Pro Stock category. Vincent also enjoys baseball and played varsity ball all through high school. He also graduated from Adelphi University in Garden City, N.Y. Vincent’s sister, Nicole, is engaged to Pro Stock Motorcycle rider Hector Arana Jr.

Odds are that we’ll see sunny, warmweather in Las Vegas this weekend, but teams have dealt with some crazy conditions at other recent stops on the schedule recently. Funny Car driver Robert Hight talks a little bit about how weather can affect his car in this edition of Tech Facts.

Someone asked me just last week to explain how bracket racing works. Since I explained it once, why not twice? The four categories that make up the NHRA Mello Yello Drag Racing Series run heads up races, not bracket races, but several of the sportsman classes you would see on a race weekend run bracket style. To back up, heads up means you line up and race the other driver and whoever hits the finish line first without fouling wins. Bracket racing means you are primarily racing the clock to beat the other driver. Bracket racers must set an index time, a time they feel their car can run consistently through the rounds. This is primarily what they are trying to do in their qualifying rounds. Once they have that index, the idea for them is to run as close to that time as they can without going faster than that time. Going faster is a foul known as breaking out. The driver that runs closest to their index time is the winner of the matchup.

Number of wins at The Strip at Las Vegas Motor Speedway by the winningest driver at the track, Tony Schumacher. He’ll need another one of those if he has any hope to catch teammate Antron Brown for the Top Fuel championship. Ron Capps has the most wins at the track in Funny Car (5), Greg Anderson leads Pro Stock drivers with seven, and Andrew Hines is tops in Pro Stock Motorcycle with four.

Back in action for the penultimate event of the season, the NHRA Toyota Nationals at the Strip at Las Vegas Motor Speedway! Tune in on Sunday evening. It’s possible some championships may be decided this weekend.

You would think youth would have an advantage with reaction times but who knows. It’d be interesting to know what the historical data shows. I will always give most of the credit to crew chiefs and teams over the driver. Lately look at Antron or Beckman, good drivers as always but their teams are on a technical role. There are always exceptions such as Erica consistently beating the hell out of Anderson with hole shot wins.
Beckman’s header angle advantage and all the head scratching going on was cool to watch. It was right in front of everyone to see but it took a while for everyone to figure out. That’s what a great crew chief can do for a driver.

I had the same initial thoughts about youth and reaction times but in this case it seems that the years spent sharpening skills, especially hitting that tree, pay off and gain the advantage over the usually quicker reflexes of the young.

No offense to Beckman and his driving ability but his resurgence is absolutely a product of Prock and Medlen and company. Most of the Nitro guys, particularly the Funny Car drivers, will be the first to admit that. They’ll tell you they have just one job and that job is not to screw it up.