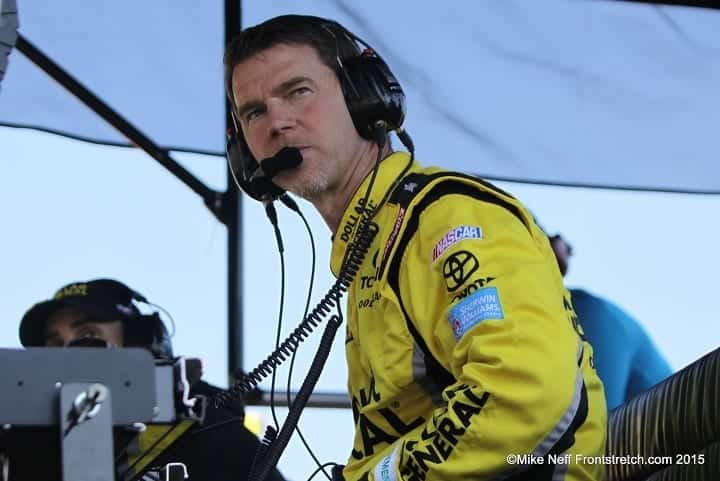 The NASCAR Sprint Cup Series heads to the only track on the circuit that has been part of every season since the beginning of NASCAR. The half-mile track in Martinsville, Va., has been called two drag strips connected by two U-turns. It will be close quarters racing with tempers sure to flare as the drivers battle to get to the inside lane and force their competitors out of it.

Jason Ratcliff leads his No. 20 team, driven by the recently Chase-eliminated Matt Kenseth, to southern Virginia with the possibility of a championship no longer in his grasp thanks to the wreck at the end of Talladega last weekend.

Focusing on the win Ratcliff touches on several points this week in Tech Talk. Pit stall selection is a big factor at Martinsville, along with drive off of the corner and track position leaving the pits after stops. He also confirms that NASCAR checks the expiration dates on all driver safety equipment every weekend.

There will be excitement for sure this weekend, and his team might just be in the middle of it.

Mike Neff, Frontstretch – Looking back at Talladega, could you imagine the race would go green that long and then all of the chaos at the end?

Jason Ratcliff – It was definitely a little bit different than most of the races we have at Talladega, as far as the way the cautions fell or didn’t fall. At times I felt like, for us, we were maintaining OK. When we did get a caution and were able to come down and put tires on and/or fuel in, I thought we had a good strategy going. The car wasn’t what we’d hoped it to be. We just kept getting stuck in the wrong lane. For whatever reason we weren’t in the position we needed to be in. It was kind of goofy the way the whole thing unfolded. For us, it wasn’t the race we wanted or needed. We never found ourselves in position to be in contention for the win.

Neff – A lot of guys seemed to be locking up tires trying to get onto pit lane. You’re trying to get all you can but did part of that stem from using such a small brake package at Talladega since you’re almost never using them?

Ratcliff – That is part of it. Also you are hauling pretty good coming to pit road there and you have such a straightaway with that short chute coming to pit lane. A lot of times you get on the brakes and it will bottom out on the splitter and take some load off of the front tires, and that is why you slide the fronts. Most of all it is the brake package. You run a really light brake package there to help with rotating weight. They’ll stop the care in an emergency situation (laughs) but much more than that they aren’t very good at it. There isn’t a really good transition to going from 165 to 60 mph pit-road speed without getting something locked up.

Neff – Heading to Martinsville this weekend, what do you view as your biggest challenge that you’re facing?

Ratcliff – A lot of times, especially for this second race of the year, you will get a little bit of a temperature change from practice to what you get in the race. The track changes on you. The way the corners are and whether it lays rubber down. Sometimes it sticks and sometimes it doesn’t. The track can really change a fair amount. You have to keep up with that. The obvious stuff, you have to maintain your track position while keeping all of the fenders on the thing. It has been a good race for us in the past.

I feel like we have a pretty good understanding of what we’ll need on Sunday to be competitive. It can leave you scratching your head at times. More times than not for me. You practice early in the morning when it is cool and then you have to race on a Sunday afternoon, which is typically the warmest part of the weekend.

Ratcliff – Throughout practice you mess with your rear spring and shock packages. You’re always trying to find a compromise between turning the center and the drive off. A lot of times you can hit on a rear spring or shock configuration that complements both, which is what you’re looking for. If you find something that helps the drive off but it hurts the center, in the long run they don’t prove to be very favorable. One good thing about Martinsville, when you find something that works it typically works every time that you go back. That is a lot of the reason that you see the same group run well there all of the time.

Other than that it is a drivers’ racetrack. You have some drivers that have a really good knack for a place like Martinsville and they like a place like that because it suits their style. From a team’s perspective, if you can hit on a couple of things that work at that racetrack, usually every time that you go back those things are helpful, plugging them into whatever setup you’re running at that time.

Neff – At any track, and especially at Martinsville, when you are working to get the car pointed in the right direction and back on the gas, is the difference between the left side springs and shocks and the right side shocks and springs dramatic or are they pretty similar in terms of spring rate and shock rebounds?

Ratcliff – Once we went to the no ride height rule a few years ago, things changed a lot. You could adjust the car statically to overcome some things that you used to have to adjust through the dynamics of the car on the racetrack. Setups that we run in this day and time are a fair amount different. They are for us at least. The no-ride-height rule opened it up to do some things that you never really dreamed of. There are a lot of variables. The window is really big and there is more than one way to skin that cat. There are a lot of different packages that work well. It is a driver preference thing. What we find that works for one of our drivers may not work well for the others. It comes down to whatever technique that guy has or what he’s looking for on a given weekend.

Neff – Qualifying at Martinsville is very tight; you’ll probably have half of a second from first to 24th. Where you qualify lets you pick where you will pit. The pit lane goes around both corners at Martinsville. If you win the pole, you want the first spot. After that, do you find it to be better for you to be close to the end of pit lane or the beginning? Would you rather be on the frontstretch? Having an opening is great, but what is it you look for in a pit box if you can’t be in one that has an opening in front or behind it?

Ratcliff – Typically, if you can’t get an opening you try and stagger. Everybody does a pretty good job of staggering out and trying to get a car that didn’t qualify so well in between cars who did and hope that it plays out for you. You hope you can get in and out of your box by the time that guy gets there or you feel like they might go a lap down early or something and that will give you an opening. Other than that, it is a pretty tough pit road with it being so tight. You need to qualify well for obvious reasons but also an opening there is golden.

Compared to having to pit between a couple of guys it can make or break you. You can have the best car and if you lose two spots every time you come down pit road it is tough to make that up. Looking at the history of where guys pick and trying to strategically put yourself in a spot where you won’t be racing around the guys who are pitted next to you most of the day.

Neff – Being on the inside there is a big deal. We see people play games trying to get off of pit lane in an odd numbered position so that they can be on that line. Typically, when a guy comes down pit road and the crew chief sees him, he counts the driver into the box and then sends him off when it is done. At what point is it the spotter’s job to try and count where you are and figure out how to get you into an odd position getting off of pit lane?

Ratcliff – We’ve played that game, and it seems like every time we do pretty good at it, someone gets a pit road speeding penalty and that puts us right back on the outside. We watch it, and you can do that, but it is still a 50/50 thing. For every two times you get it right you’re going to have two times where a car gets a penalty or a guy stays out to lead a lap and then pits. You’re just on different strategies, and that is the biggest deal. Just because you pit it doesn’t mean everyone on the lead lap pitted. You might be an odd number off of pit road, but if three guys stayed out then it doesn’t matter. If you can do things or find ways to keep yourself in that bottom lane it is a big deal.

Neff – A few weeks ago in the Camping World Truck Series, Austin Theriault‘s HANS device broke and the transmission came into the greenhouse. Does NASCAR check the expiration dates on all of the driver safety items every weekend?

Neff – How many hot dogs do you plan on eating this weekend?

Ratcliff – Zero. I used to when I first got into this, but I try and watch what I eat a little more these days.