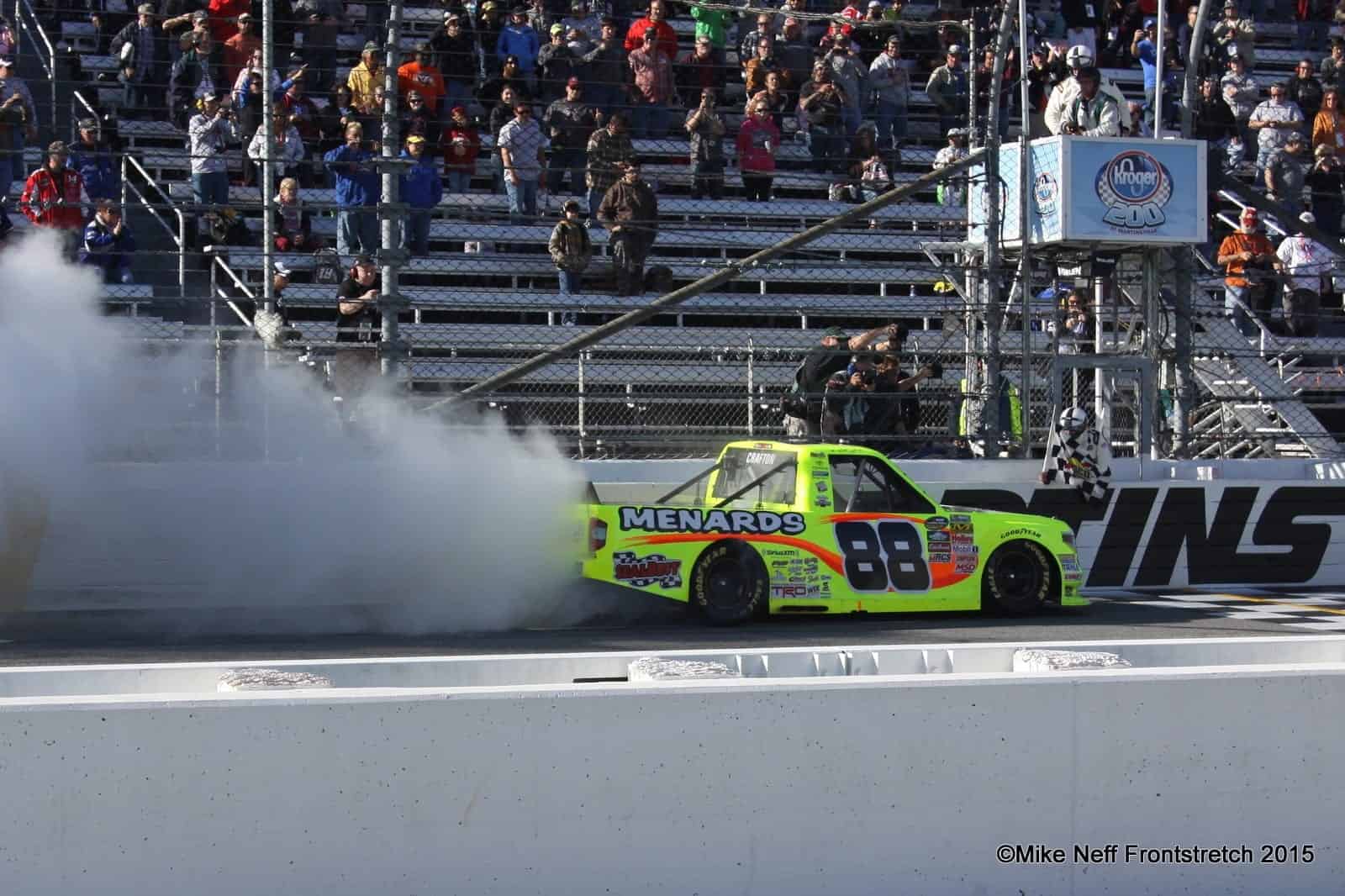 In a Nutshell: Matt Crafton grabbed the checkered flag in the Kroger 200 at Martinsville Speedway ahead of John Hunter Nemechek. The race featured 12 cautions flags and saw drivers like Cole Custer and Timothy Peters perform marvelous comebacks after early troubles at the paperclip. Cameron Hayley, Custer and Tyler Reddick rounded out the top five.

Who Should Have Won: Custer. It’s an unfortunate deja vu moment for 17-year-old Custer. Last time at Martinsville in March, the JR Motorsports driver tangled with the lead before getting spun. Jump to today where Custer won the pole and led a race-high 96 laps before a speeding violation during a lap 123 pit stop forced him to the rear. Though Custer rebounded for a strong fourth – his first top-five finish since winning at Gateway in June – it was a win that got away.

A Thrilling Third for Cameron Hayley

Who knows, if it wasn’t for a championship-contending teammate of Crafton being out front, Hayley may have put the aggression on the line for the grandfather clock.

Abandoning the land of ifs, Hayley had arguably his most impressive performance in his rookie Truck Series season. Tying his career-high qualifying mark on the front row in second, Hayley was a commonplace name in the top five throughout the tough, clamorous afternoon.

Once teammate Crafton took the top spot with 63 to go, Hayley was in prime position to either defend or attack for the victory.

“I knew my teammate was going to race me clean,” Crafton said. “He wasn’t going to do anything to make us lose points. At the end of the day, he knows that Duke and Rhoda Thorson own that truck and they’re trying to win a championship and an owners’ championship. He definitely wasn’t going to drive it down into turn 3 coming to the checkered and punt me.”

Hayley restarted second on the dreaded outside lane before losing a battle with Nemechek and falling to third, a career-best result in Hayley’s 23rd Truck Series start.

Timothy Peters proved how confusing the term hometown advantage can be, especially if your home track is Martinsville.

The 36-year-old took the green flag at Martinsville with a Talladega victory in his back pocket and a solid 11th-place starting spot for 200 laps.

However, the day soon took a rocky direction as he spun his No. 17 Toyota in turn 4 on lap 8.

Additionally, the 2009 Martinsville winner pressed the kill switch on the steering wheel, which resulted in a spin on lap 86 after contact with Dalton Sargeant. He spun once more on lap 157, and the pit stop that followed that spin resulted in a pit-road penalty for pitting too early and a loose tire.

But that’s where the hometown advantage began as Peters charged through the pack of young guns and crushed trucks to a sixth-place result.

Though his 13th career top 10 at home, this one will sure to bring some stories for years to come.

Martinsville tends to bring out the new faces of NASCAR history. Saturday saw three drivers – Ross Kenseth, Paige Decker and Austin Cindric – hit the pavement for the first time in a truck.

Unfortunately for Decker, she ran into trouble with point leader Erik Jones on lap 63, resulting in a single-truck spin that slowed Gray Gaulding. She came home 30th, seven laps down.

Cindric showed impressive pace in his Brad Keselowski Racing Ford, running top 10 regularly. The 17-year-old got swallowed up in a backstretch crash with six laps to go, leading to a 25th-place result.

Kenseth was also involved in the late accident with Cindric, though the 22-year-old was able to stay in position. The No. 18 Toyota came home 17th.

Despite a disappointing finish of 20th for Black Jr., he eases closer to the top 10 in points as Gallagher finished 29th. The gap now is 14 points. Young also inches closer now sitting a further eight points behind Black.

“It’s awesome. I just have to thank, at the end of the day, Duke and Rhoda Thorson and Menards for sticking with me through all those winless years that we had. Finally, we started – got a couple wins here and there and at that point it was game on.” –  Matt Crafton, race winer

“The guys out here are really aggressive. It doesn’t matter if it’s lap 1 or lap 200, they’re beatin’ and bangin’ the whole race.” – Austin Hill, finished 19th

“I think it’s just some of those things that happen at Martinsville. Got the bad end of it.” – Austin Cindric, finished 25th

Up Next: The Camping World Truck Series heads next to Texas Motor Speedway. Kyle Busch is the defending race winner after leading 80 laps.