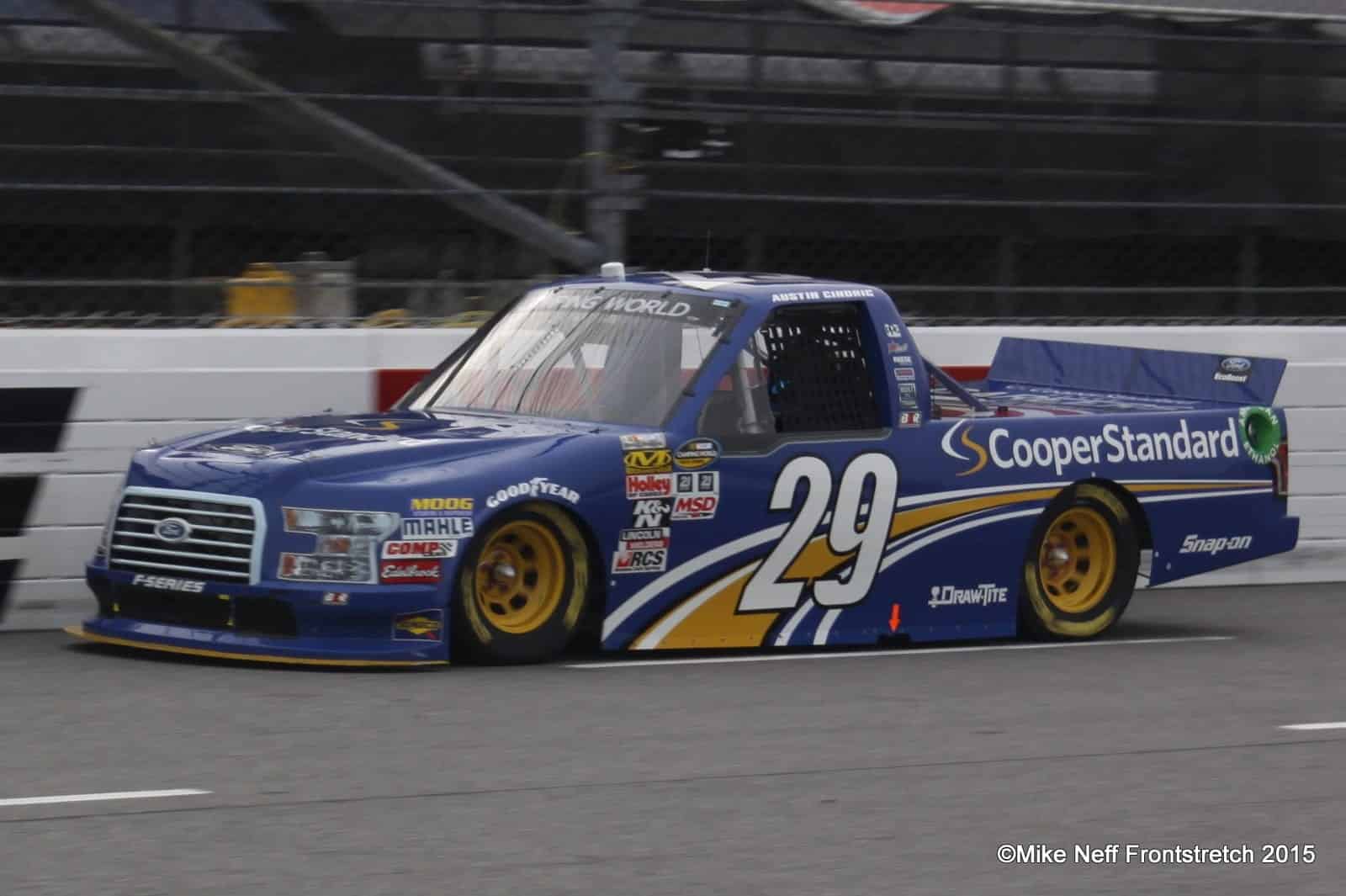 For the second week in succession, Camping World Truck Series team owner Brad Keselowski awarded a colossal opportunity to drive his No. 29 Ford truck; this time to a new young gun in Austin Cindric.

The 17-year-old son of Team Penske president Tim Cindric made his Truck Series debut at Martinsville Speedway in the Kroger 200. Though it was a first-time experience, it was far from his opening laps in a racecar.

Making his ARCA Racing Series debut at Iowa Speedway in July, Cindric impressed by leading 29 laps and finishing fourth. Another start at Kentucky Speedway soon followed, where he led 27 circuits before finishing 17th, two laps down.

Though that may be the extent of his stock car career, Cindric has achieved success on many different platforms from being an X-Games Medalist in the Red Bull Global Rallycross Lites Series to becoming the youngest ever to achieve a podium finish in the Cooper Tires USF2000 Series.

In February, Cindric drove his Erebus Motorsport Mercedes in the Liqui Moly Bathurst 12 Hour race at the 3.8-mile Mount Panorama Circuit in Bathurst, New South Wales – or in other words, one of the most faithless, serpentine tracks in the world toward a 21st-place final result.

“The passion for motorsports down there is insane,” Cindric said of the Australian racing fans. “It’s probably at the same level as football is for America. It’s a cool atmosphere to be around. I’m sure by the time Saturday and Sunday come around it will be pretty close to this.”

At Martinsville Speedway, however, he had never seen the front gate until Thursday.

“It’s my first time [here],” Cindric said following final practice on Friday at Martinsville. “I’ve been to Bristol but I haven’t been to Martinsville. Its a cool, new experience. I hear I have to get a hotdog.”

Though he’s a first-timer at not only the 0.526-mile circuit but in the three premier NASCAR series, Cindric put down solid times in the two Friday practice sessions, running a total of 111 laps at a best time of 20.001 seconds, good enough for 15th.

“These last two practice sessions I probably learned more than I probably will ever know,” Cindric said. “Lots going on in a short amount of time, still trying to process it all to be honest.”

Addition to the satisfactory start from the speed side, this weekend has naturally brought essential guidance from Keselowski, who has a Sprint Cup Series championship to his record and a Truck Series win in 2014.

“Brad has been a huge help,” Cindric continued. “He obviously gave me the opportunity and trusted me with his truck. It’s really cool, I’m really grateful.”

Being the second youngest driver in Saturday’s field, the Ohio native knows opportunities this big don’t come to every blossoming racecar driver.

“It’s been quite overwhelming to be honest,” Cindric said. “I got here with no expectations and I walk into the track and the weight started to come down on me. So I think, ‘Man this is pretty cool.'”

And needless to say, Cindric was in a fast machine as the No. 29 truck has finished top five at Martinsville four years in a row at the “Paper Clip” including a dominant win by Joey Logano in March.

“Really cool opportunity,” he concluded, “just grateful for everyone who’s been able to make it happen.”

Saturday was an active day for Cindric, as the series had the typical three-round qualifying session less than three hours before driver introductions.

Cindric took to the track and put down a good enough lap to comfortably move on to the second round. Running a best time of 19.805 seconds (95.612 mph), he was near advancement but was not quick enough. Ending 14th, Cindric believes having to make an extra run cost him the grip to make it happen.

“It looked like a bunch of little stuff,” he said. “I think 0.030 would’ve put me up seven positions so a little learning experience there – learning how close this stuff really is.

“I think it went pretty well. It was a solid run. It was unfortunate the first run we had to go twice because a truck pulled out in front of us right when I was making a good lap. Used my tires up a little early but that’s how it goes. A good learning experience and well move on to the race and stay out of trouble.”

Following the solid start to the weekend, father Tim was pleased with how his son had handled the steep learning curve.

“I’ve seen him run a lot of places,” Tim said. “It’s a whole different environment, something that I’m accustomed to. It’s hard to remember the fact that he has not been here before. I’m proud of the way he’s approached it. He’s got a lot to learn and a great opportunity.”

From the hills of Bathurst to the hills of Virginia, Tim says it has always been about making the best decisions for his son.

“My biggest concern,” he said, “is that I help him make the right decision about whether it’s the right time to make that jump or not. So far, he continues to rise to the challenge and that’s really all I’m looking for is just to see progress. Today is the first step.”

As the green flag waved to start 32 engines racing, Cindric took his time to learn the truck and more than anything to stay out of trouble.

The race had 12 cautions, the most since 2011. The plethora of restart action gave Cindric many chances to get to know other drivers and the style of racing that the paperclip breeds, even creating his own as he made some bumper-to-bumper contact through the pack.

“Obviously, it’s not the way I want to race,” Cindric said. “I want to race people clean. Sometimes you have to use your front bumper a little bit.”

Though the speed and confidence had a bright pique, it all came crashing down with six laps remaining as contact with Caleb Holman got his Ford sideways, sparking further contact with Spencer Gallagher and Jones while turning Cindric into the outside wall, causing significant damage to the rear of his Ford.

“Ended up trying to work out,” Cindric said following a 25th-place result, “somebody was trying to get in front of me and cut down and stopped in front of me under brakes, couldn’t really do much of anything. Then got plowed in behind.

“I think it’s just some of those things that happen at Martinsville. We got the bad end of it but a lot of learning.”

Despite the sour ending to a sweet deal, Cindric garnered much precious on-track time, lessons learned and fans gained.

Cindric has his head held high, pointing at his next shot at a Truck Series seat.

“Hopefully we get to do it again sometime,” he concluded. “I think the guys are really happy, I’m happy with how I did. I wanted to finish the race. I think we definitely had potential for a top 10, maybe even a top five. Well try to do it next time.”