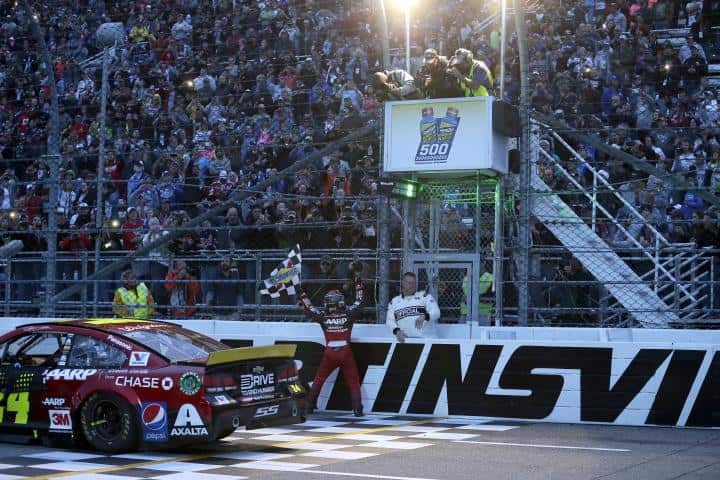 You wouldn’t think the man hoisting the checkered flag had done it 92 prior times in the Sprint Cup Series.

Jeff Gordon, in his final race at Martinsville Speedway in his final full-time season in the Sprint Cup Series, held off Jamie McMurray in a two-lap shootout to grab the victory in the Goody’s Headache Relief Shot 500. It’s the 93rd win of his legendary Sprint Cup Series career, ninth at Martinsville and most importantly a victory that will carry Gordon to the Championship Four at Homestead-Miami Speedway in three weeks.

“Oh my gosh,” Gordon said in disbelief in Victory Lane. “This is one of the most memorable experiences of victory I can ever think of. My final year, final start at Martinsville, the meaning behind this win, what was on the line. How we had to do it, the drama that there was. This team just seems to persevere.” Locked into Homestead, Gordon will rest easy the next two weeks at Texas Motor Speedway and Phoenix International Raceway.

“Unbelievable, absolutely unbelievable,” Gordon said. “I keep thinking I’m going to pinch myself and wake up but I hope tomorrow I wake up next to that Grandfather clock.

“I don’t know what it feels like to be a rock star, but that’s as close as it can get I think because that’s a rock-star moment right there.”

In the eyes of many, Gordon’s emotional return to Victory Lane will be ranked No. 1 on the weekend’s headlines. However, another raging headline will be the growing feud between Joey Logano and Matt Kenseth that took a vicious turn with 46 laps to go.

Logano, leading a race-high 207 laps, was lapping Kenseth’s damaged No. 20 past the start-finish line before Kenseth hooked Logano into the turn 1 wall, taking Logano out of the race and forcing NASCAR to park Kenseth for the remainder of the afternoon.

The payback from Kenseth brews from a late-race spin at Kansas Speedway while the two raced for the win.

“I think what happened at Kansas is a completely different deal,” Logano who returned to the half mile track to finish 37th. “We were racing for the win and he blocks you a few times and then we raced hard and he blocked me the last time and we spun out. Here, it was just a complete coward move, especially for a championship racecar driver and race team. Just a complete coward. I don’t have anything else to say.”

Logano was on track to a fourth consecutive win, one that would have clinched the 25-year-old into Homestead.

“It’s a chicken-you-know-what move,” he continued, “to completely take out the leader when your race is over. We’ll move on.”

Kenseth came in to Martinsville already eliminated from the Chase following a dreadful Contender Round and was limping following a lap 436 crash on the backstretch that also took Chasers Brad Keselowski and Kurt Busch out of contention.

“I had two chances to win in the last three weeks,” Kenseth said, “and got wrecked out of both of them going for the lead. One from [Logano] and one from Brad [Keselowski]. That’s disappointing. I should have never been in that spot trying to move that car around and to the finish.”

The highly dramatic accident awarded Gordon the top spot and moved non-Chaser McMurray into contention for his first win in more than two years.

“When Jeff gave me the outside [lane],” McMurray said who came home a strong second, “I somewhat wanted that. I struggled on the inside. Had a lot on my mind there. I drove as hard as I could.”

Denny Hamlin came home third despite a spin on lap 114. Out of title contention, Hamlin commented on the Kenseth-Logano incident.

“Joey didn’t choose to call me until the Chase started, in fear of getting wrecked,” Hamlin said, regarding a past on-track incident with Logano. “I think, in my opinion, you got to control that a little bit better and talk to the person. But if you’re just going to stick your nose in there and say, ‘Ah, well, that’s the way it’s going to be,’ you’re going to have to expect contact.”

“Yeah, it was damp. There was water,” Busch said who rebounded to finish fifth. “I could see it at the end of the race. With the lights the way they were, you could see the little bit of shine there.”

Sitting nine points above the cutoff spot of fifth, Busch commented on Gordon’s lock into Homestead.

“That puts him on to Homestead,” he said. “That’s a car we’re going to have to race no doubt about it. I said that if Jeff made it to Homestead that he will be a guy that I do believe couldn’t beat the [No.] 22 straight up. But if the [No.] 22 isn’t there, Jeff is going to be a contender.”

Martinsville showed once again the importance of staying out of trouble as 18 cautions waved for 109 laps. Danica Patrick and David Gilliland had multiple incidents of contact which started on lap 158 with Gilliland pushing Patrick into the turn 2 wall and ended with a lap 419 attempted payback from Patrick which took her car out of the race.

The final stages of the race saw a strategy move made by both Hamlin and AJ Allmendinger, who each stayed out while the leaders took to pit road.

Allmendinger took the top spot from Hamlin and led for 19 laps before Gordon got by and led the rest of the way. He finished 11th.

Rounding out the top six were Dale Earnhardt Jr. in fourth and Martin Truex Jr. in sixth, who said he had a “possible winning move” on Gordon in the closing stages.

“I got to say congratulations to Jeff,” said Truex who starts the Eliminator Round with another strong run. “What an awesome career he’s had. It was fun racing with him today. There was a time at the last restart I almost got a run on him to pass him. That would’ve been possibly the winning move.”