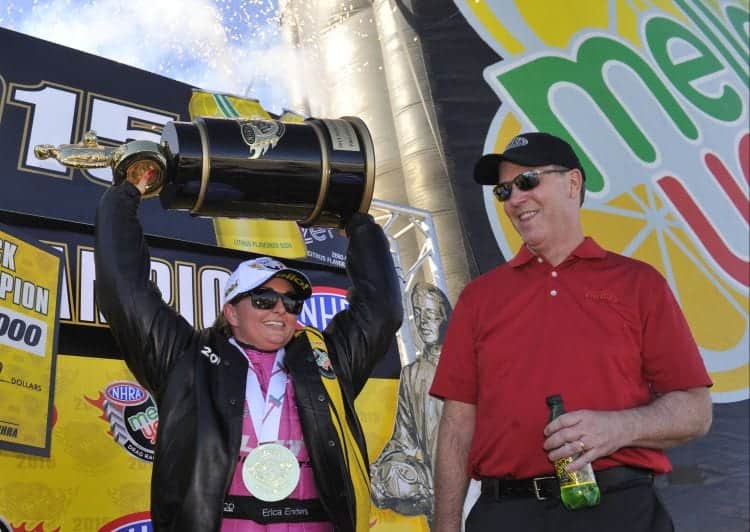 Sprint Cup Series: They’re at it again. Just as Joey Logano had visions a fourth consecutive win of 2015 and first at Martinsville Speedway, Matt Kenseth came back on track multiple laps down and all the eyes turned to the other yellow car of Kenseth.

Heated from the Kansas spin off Logano’s bumper two weeks ago and a late crash with Team Penske teammate Brad Keselowski with 64 laps to go at Martinsville, Kenseth took a right turn as he followed race leader Logano into turn 1. What followed was a roar of screams and cheers from the crowd and a torn-up championship chance for Logano.

NASCAR’s imminent reaction was to park Kenseth for the remainder of the event. What will follow with possible penalties being announced on Tuesday is yet to be known.

Nonetheless, the tasty statements from Logano will be sure to charm headlines as the second-year Chase format continues to rage drivers and entertain fans. – Zach Catanzareti

Xfinity Series: Free Agency Coming into Play – Well, a few pieces of the puzzle have been solved. This past week, JR Motorsports announced that Justin Allgaier will be joining the organization, replacing Regan Smith in the No. 7 car. The move is substantial for a team that added veteran Elliott Sadler, who will once again be switching teams at season’s end.

Along with Allgaier’s announcement, Cale Conley stated that he will not be returning to TriStar Motorsports for the remainder of the season, citing a lack of sponsorship. While it is unclear what he will be doing in 2016, he claims that he will be back full-time. However, there are still many questions about the 2016 driver line-up for the entire division.

It is unclear what will happen with Roush Fenway Racing’s Chris Buescher, who leads the championship standings. Rumors have him going to the Cup Series full-time, but that doesn’t necessarily mean he wouldn’t be racing in at least some NXS races. Also, what happens to Darrell Wallace Jr.? He was kicked out of a premier ride due to a lack of funding last year, and who is to say that it couldn’t happen again? Though that is unlikely given his level of success this year, it is a major question that needs to be answered. – Joseph Wolkin

Formula 1: Rosberg Rules; Ferrari Failure – Nico Rosberg did pretty much everything he needed to do this weekend. He showed his strength in the practice sessions, then backed it up by taking the pole for F1’s return to Mexico. The races, however, have been the problem with Rosberg as he often gets bested by teammate and 2015 champion Lewis Hamilton. At the Mexican Grand Prix, Rosberg sped off into first after the first corner and never looked back. He led the race throughout and though he felt pressure from Hamilton during the late stages, he never made a mistake to give away the race, earning his first win since Spa.

The surprising story of the race may have been seeing Ferrari face a double retirement. Kimi Raikkonen first left the race in the early laps. Sebastian Vettel, who suffered a puncture on the opening laps when battling with Daniel Ricciardo, crashed out, an error owed to driver error, with him claiming that he “did a **** job today.”

Hamilton finished second while Valterri Bottas earned the final podium position. The Red Bull duo of Daniil Kvyat and Ricciardo finished out the top five, respectively. Overall, the series return to Mexico looked like a success as the crowd filled the stands and there appeared to be a festive attitude to the event. – Huston Ladner

“When we got to Vegas the door was open and it feels good to shut the door on this 2015 season and get it over with,” said Brown. “It’s just so awesome to get it done and not be a nail-biter.”

Enders put an exclamation point on her winning day by also winning the race too, defeating Bo Butner by cutting a perfect .000 light and then running 6.595 seconds, 208.97 mph in the finals to Butner’s 6.610 seconds, 209.33 mph. She also beat Deric Kramer, Shane Gray, and Drew Skillman in earlier rounds.

“My guys are so incredible,” said Enders. “It’s amazing what you can accomplish when you get the right people around you. To do it in front of all my sponsors and family here this weekend, it is incredible. To cap off a second world championship here at Vegas is just crazy.”

Brown, meanwhile, bowed out in round three, leaving Doug Kalitta and Larry Dixon to contest the final for the Las Vegas Wally. Give this one to Kalitta who ran 4.239 seconds, 207.59 mph to beat Dixon’s 8.110 seconds, 73.95 mph. Kalitta actually coasted across the line after his engine exploded, but he had enough of a lead over Dixon, who smoked the tires, to hang on for the win. Kalitta got by Steve Torrence, Richie Crampton and Brown in earlier rounds.

The Funny Car championship, meanwhile, will go on to Pomona to decide the fight as contenders Jack Beckman and Del Worsham both went out in the second round. The margin going into the final event is 38 points in Worsham’s favor.

The day belonged to Robert Hight in Vegas when he defeated Tommy Johnson Jr. in the finals with a 3.955, 323.97 mph to Johnson’s tire smoking 8.279 seconds, 85.02 mph. Hight also raced his way by Gary Densham, Worsham and Chad Head to earn the right to face Johnson.

It will take a little bit more for Pro Stock Motorcycle to be decided, as that category also moves on to Pomona to crown a champion. For this race, Andrew Hines, defeated Jerry Savoie in the finals to move on with a margin of 46 over Savoie for the championship. Hines made a pass of 6.920 seconds, 193.05 mph, but it made no difference what he ran as Savoie turned on the red light. Hines also raced his way through Jim Underdahl, Scotty Pollacheck and Hector Arana to get to the finals. – Toni Montgomery

Short Tracks: The final race in the successful first season of the Super Late Model and Late Model Stock Car format of the CARS Tour took place Saturday at Hickory Motor Speedway (N.C.). In addition to two championships to be decided, a $40,000 bonus was offered if a driver could compete and win in both 150-lap features. Five drivers took the challenge, but all would come up short.

The Super Late Model portion featured Christopher Bell, fresh off an announcement that he will be driving full-time in the NASCAR Camping World Truck Series in 2016 for Kyle Busch Motorsports, inherited the lead about a third of the way through and cruised to the victory. Kyle Grissom, son of 1993 NXS champion Steve Grissom, finished runner-up but it was not enough to overcome a point gap behind Cole Timm, who was awarded the 2015 championship trophy with a seventh-place result. – Aaron Creed

Sports Cars: Porsche Takes WEC Championship – Saturday night saw the FIA World Endurance Championship contest their penultimate race of the season, the 6 Hours of Shanghai at Shanghai Circuit in China. Much like Fuji in Japan a couple of weeks ago, rain forced the event to start behind the safety car. Beyond that, it was once again Porsche putting themselves above everyone else. The No. 17 Porsche 919 Hybrid shared by Timo Bernhard, Brendon Hartley and Mark Webber won the pole and led from the front for the vast majority of the race. While they were threatened for a good chunk of the race, the No. 17 team held on to win by 26 seconds and expand their points lead.

The sister No. 18 had a different road. Marc Lieb spun out on the first green-flag lap of the race after contact from the No. 7 Audi R18 e-tron quattro driven by Andre Lotterer. From there, Lieb had to charge through the 31-car field in adverse conditions to get himself back up in the hunt, something that was accomplished by the third hour. By the end of the race, the No. 18 was second, good enough to clinch the manufacturers’ championship for Porsche.

In P2, KCMG took two sizable hits. One, Friday saw driver Richard Bradley officially reprimanded for the crash in Fuji after the additional scrutiny. In this situation, a reprimand is like probation in NASCAR, but with more teeth. In the race, driver Nick Tandy spun into the gravel at the same time Lieb spun out, causing a safety car. KCMG eventually finished third in class, but the incident cost the team a lap that they never got back. Signatech Alpine claimed their first WEC class victory with the lineup of Paul-Loup Chatin, Paul Dillmann and Nelson Panciatici, while points leaders Sam Bird, Julien Canal and Roman Rusinov for G-Drive Racing was second. The No. 26 G-Drive Racing team has a 16-point lead in the standings.

In GTE-Pro, Porsche AG Team Manthey claimed the win with their No. 91 Porsche 911 RSR shared by Michael Christensen and Richard Lietz. The margin of victory was 45 seconds over AF Corse’s No. 51 shared by Gianmaria Bruni and Toni Vilander. AF Corse’s No. 83 Ferrari F458 Italia driven by Rui Aguas, Emmanuel Collard and Francois Perrodo won the GTE-Am class by 42 seconds over the No. 98 Aston Martin V8 Vantage of Paul Dalla Lana, Pedro Lamy and Mathias Lauda.

The WEC season finale is the 6 Hours of Bahrain, scheduled for Nov. 21 at the Bahrain International Circuit. FOX Sports will have coverage. – Phil Allaway

Have heard through a solid source both Buescher and Wallace will remain in Xfinity next season in the 6 and 60. Talked to a rep at Roush Performance and they’ll be on the cars once again for quite a few races.

A bad day for Ferrari down in Mexico. First time in many years that both cars had failed to finish a race. And Red Bull showed surprising speed for a team using a power unit that is, according to the owner, 80 hp down on the Mercedes unit.
But IMHO the news that the top three men on the operations side of Manor have resigned is the big news. Hope it doesn’t mean a sale is imminent. But one of those men said that the struggle to save and drive the team forward had been “a waste”. Not sure how to read that any other way than a sale. Pity if it happens.