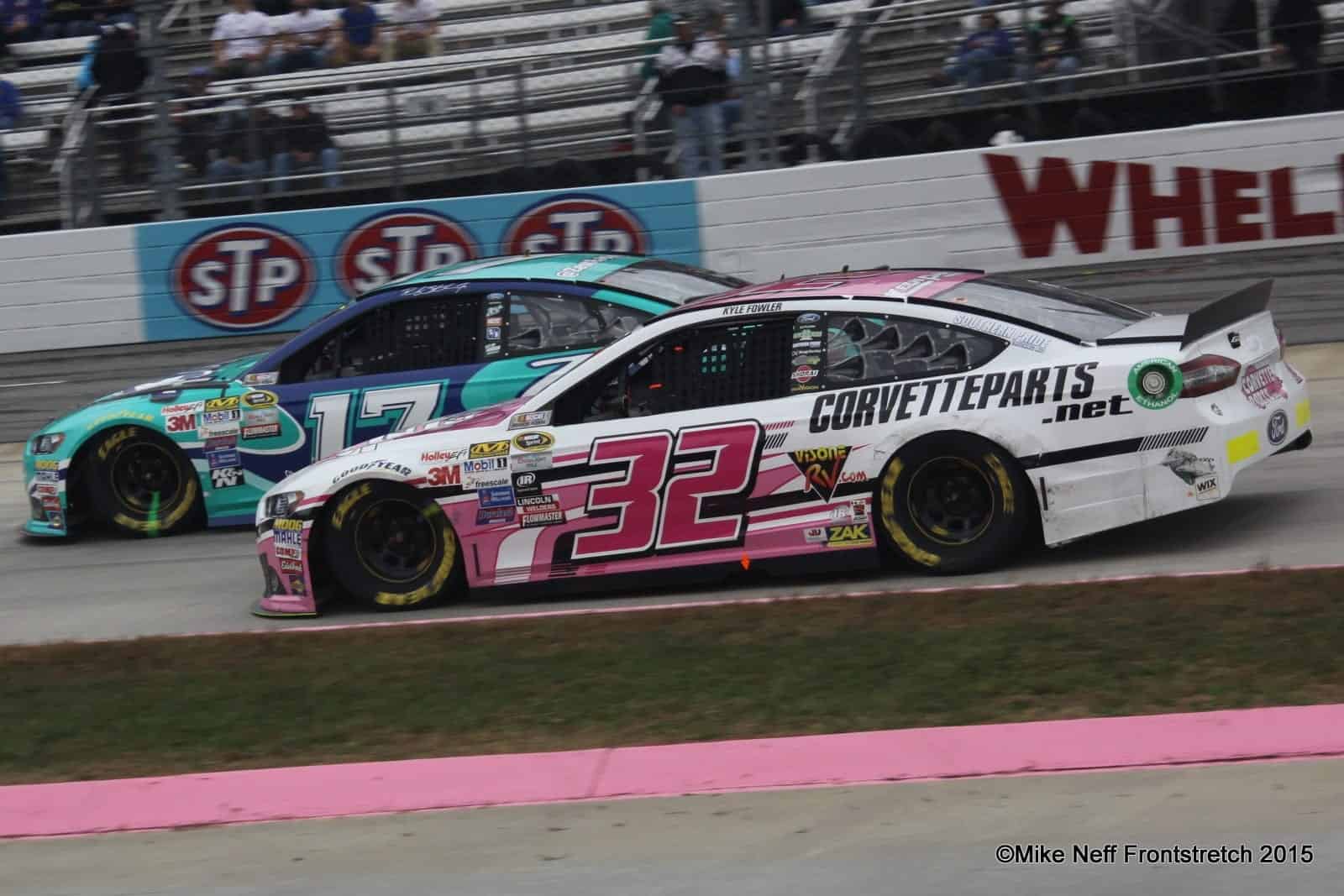 Kyle Fowler from Smyrna, Ga. was given a second shot at a Sprint Cup Series ride driving for Archie St. Hilaire in Sunday’s Goody’s Headache Relief Shot 500. The race at Martinsville brought Fowler back to the track for the second time after running and completing last year’s fall Chase race in the team’s No. 32 Ford. It was a clean race that ended short for Fowler, pulling into the garage on lap 373 and coming home 41st after brake troubles.

At 23 years old, Fowler may have limited experience in the Cup Series. However, he has gathered nearly 20 years of racing experience that kicked off in quarter midgets, quickly turning to Bandolero and Legends cars before moving to late model racing in 2007. With strong numbers and increasing popularity that season, Fowler made his debut in the NASCAR K&N Pro Series East in 2009 driving for Ken Schrader at Tri-County Speedway in Hudson, N.C., finishing 13th. The guidance from racing legend Schrader continued into the ARCA Racing Series where Fowler made three starts for the Chevrolet team in 2010 with a best finish of 12th. He also boasts two second-place qualifying efforts and 47 laps led in 2011 for Billy Venturini in ARCA.

The progress for the Georgian finally hit NASCAR soil in 2012 when he made his Xfinity Series debut in 2012 at Las Vegas. He ran six more races for Randy Hill that year and, in 2013, grabbed his first lead-lap finish in NXS at Indianapolis Motor Speedway. Fast forward to Oct. 2014 when Fowler’s childhood dream became reality at Martinsville as he made his Cup debut, completing the event and finishing nine laps down in 28th position.

One year later, not only was Sunday another shot at a premier series ride during tough, unknown times for Fowler but it also had some bright pink livery with a special meaning behind it.

Zach Catanzareti, Frontstretch: What are your feelings toward racing at a track like Martinsville?

Catanzareti: You mentioned you made your Cup debut here a year ago. A year later, how has the approach been different?

We have a special paint scheme on the car this weekend. Wearing a very bright pink suit, that’s for Breast Cancer Awareness. Corvette Parts and Keen Parts put us together with that so it’s great to be able to support that. That’s something close to my heart with my mom going through breast cancer not too long ago. I’m excited about that.

Catanzareti: What advice have you received from Cup veterans?

Fowler: This place, there is so much attrition. Basically, if you can stay out of the wrecks, you’ll be all right. That’s what everybody keeps saying. I’ve talked with a few different drivers there and got a few ideas on how to better ourselves so that’s good.

Catanzareti: Does the history of this place ever hit you when you come through here?

Fowler: Absolutely. Ever since I was about seven, it was my dream to race at this level. Anytime you can come to a place like Martinsville – so much history, one of the oldest tracks on the schedule – it’s great to think back at all the legends that have raced here.

Catanzareti: You have raced in Cup, Xfinity, Trucks, ARCA. In your opinion, what has been the most fun car to drive in your racing career?

Fowler: I’d definitely say the Cup car, obviously, just because it’s what I’ve always wanted to do. I’m thrilled and blessed to have the opportunity to do it. I’d have to say that. And plus, one of the higher horsepower cars, so I always like a lot of motor to it.

Catanzareti: How did this deal come together with the No. 32 car for the second time?

Fowler: I raced with Archie St. Hilaire, who owns the team, in the NXS. When he moved to Cup, we were able to put a deal together with the same sponsor we have here with Corvette Parts last year. It just came together good for again us this year.

Catanzareti: Recap the difficulties of getting sponsorship. Obviously, if it were up to you, you’d have a full-time Cup ride.

Fowler: Absolutely. I don’t get to race anywhere here as much as I’d like to. But I’m excited for every chance I do get behind the wheel. The marketing end of it and the finding sponsorships, it’s definitely the hardest part. I consider myself a driver but that’s not everything you need to have in this day and age. You have to be able to do it all. I try to find my own sponsorship but it’s definitely tough.

Catanzareti: You mentioned how special it is to have a pink car this weekend for your mom.

Fowler: Not too long ago, she was going through breast cancer. She’s in remission right now but anytime I can support a cause like that, it’s definitely great to be involved.

Catanzareti: Has she been a big mentor to you in your racing career?

Fowler: It used to be, whenever we ran late models and coming up through the ranks, my mom and dad were the crew. That was it. It’s definitely great to be able to have them out at the racetrack and get to do this.

Catanzareti: Who would you say has been your biggest mentor in racing? If it’s been another driver, team owner?

Fowler: I look up to a lot of different drivers. I got David Ragan who is from Georgia so it’s great to be able to be friends with those folks. I have a few people I can lean off of, but I look up to a bunch of these drivers, for sure.

Catanzareti: What would you say is the biggest moment for you on track where it really hit you that you’re really getting there?

Fowler: Anytime you throw the green flag for one of these Cup races, you’re looking around and the cars around you are the people you idolize. It’s great to be involved in that and see that you’re racing against the people you’ve always wanted to. It’s a dream come true.

Catanzareti: When did it hit you when you were young that you wanted to be a NASCAR driver?

Fowler: Ever since I was about seven years old. I started racing at four-and-a-half but when I was about seven, I was serious about it. I started wanting to go to bigger races and it just kind of snowballed into a progression of “I wanted to do this.” I’m fortunate enough to have the opportunity to do it.

Catanzareti: Do you have any more plans as far as Xfinity or maybe the Truck Series? Do you have plans for next year or is it that all as it comes?

Fowler: As it comes. I would love to be able to say I have this on the line, but it’s kind of a race-to-race deal trying to put things together.