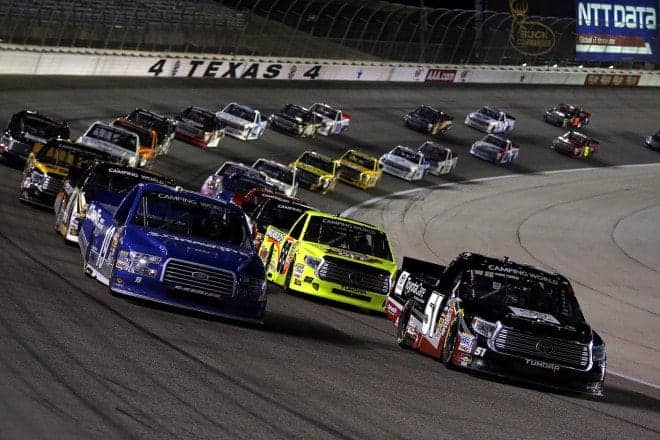 NASCAR released the preliminary entry list for the Nov. 6 WinStar World Casino 350k. There’s a total of 30 entrants, two short of making a full field. However, the two MAKE Motorsports entries (the No. 1 and No. 50), which have competed in every event of the 2015 season, have yet to make it on the list.

As announced Monday Jeb Burton will return to the No. 00 for JR Motorsports. Burton, a rookie with BK Racing in the NASCAR Sprint Cup Series, earned his lone NCWTS victory at Texas in 2013.

Austin Theriault is currently listed as the driver of the No. 29 Ford. However, he has yet to return from injuries sustained in a crash at Las Vegas Motor Speedway. Whether Theriault or a replacement driver will wheel the machine is unknown at this time. UPDATE: Theirault is out for this weekend. Meanwhile, Brandon Jones and Christopher Bell will look to continue a recent string of strong performances in the Nos. 33 and 54, respectively. Mike Harmon will drive his self-owned No. 49 while rookie Jesse Little returns to the No. 97.

The NCWTS will open the weekend at Texas with two practice sessions on Thursday, No. 5, at 3 p.m. ET and 5:30 p.m. ET. The series will return on Friday for Keystone Light Pole Qualifying at 4:40 p.m. ET with coverage for the WinStar World Casino 350k following at 8:30 p.m. ET on FOX Sports 1 and MRN.