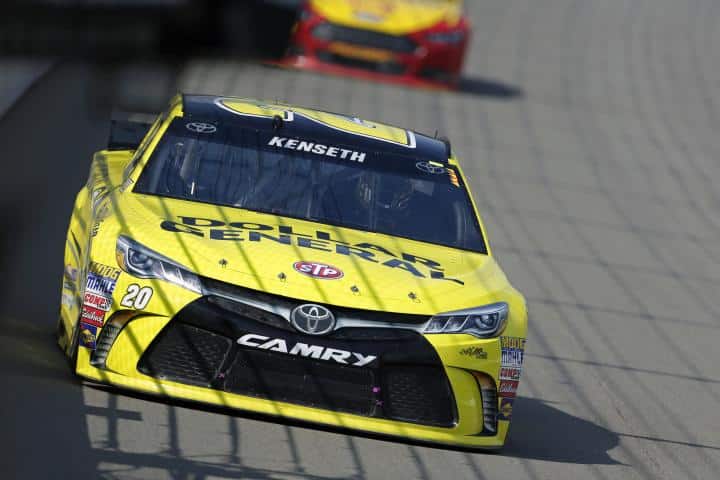 NASCAR issued penalties to two NASCAR Sprint Cup Series drivers following the Goody’s Headache Relief Shot 500 Sunday at Martinsville Speedway. The strongest consequences were for Matt Kenseth, officially suspended from NASCAR competition through the completion of the next two races. Kenseth was popped with a behavioral penalty for violating sections 12.1 and 12.8 of the NASCAR rulebook, intentionally wrecking Joey Logano in the closing laps of that Sprint Cup event. The Wisconsin driver will also be placed on NASCAR probation over the next six months for his behavior.

“Based upon our extensive review, we have concluded that the No. 20 car driver, who is no longer in the Chase, intentionally wrecked the No. 22 car driver, a Chase-eligible competitor who was leading the race at the time. The No. 20 car was nine laps down and eliminated the No. 22 car’s opportunity to continue to compete in the race. Additionally, we factored aspects of safety into our decision, and also the fact that the new Chase elimination format puts a premium on each and every race. These actions have no place in NASCAR.”

Joe Gibbs Racing will appeal the ruling, already scheduled to be held in front of a three-member panel Thursday at 9:00 a.m. ET.

“The appeal will challenge the severity of the penalty which is believed to be inconsistent with previous penalties for similar on-track incidents,” the team said in a statement. “There will be no further comments from JGR personnel during the appeal process.”

I’m good with this. The punishment fits the crime.

I would have preferred a suspension for the rest of the season, but I’m happy with the two races. Kudos to NASCAR for getting it right.

I agree. I didn’t think NASCAR would belly-up but I guess they have to protect the sanctity of the chase.
I felt a suspension was warranted,,, 1-2 or 3 races were in scope.

I’m indifferent to either competitor. The biggest statement this makes is that the holy and venerable Playoff comes before anything else. I do, however, think that if the offender had been one of the Hendrick Heroes, no penalty at all would have been assessed.

I guess they didn’t agree with the gladiator business. Now I know. I was hoping for him to take an early vacation and have a 3 race suspension, but I’ll take the two.

Awesome! The 22 is officially protected,
Wonder what would have happened if the 24 had done something like this?

I wouldn’t go around saying that the 22 is protected. He isn’t! While Saint Gibbs Racing still has two drivers in the chase, there is one that was eliminated, Dennis-the-menace Hamlin. And Hamlin has a lot of pent up hatred toward Joey because, when they were teammates, Joey didn’t bow and curtsy to the almighty Hamlin. Too, they have also had run-ins on and off the track. Hamlin has nothing to lose, so watch for him to take Joey out at both Texas and Phoenix. He will most likely go after Keselowski too. After all, Brad ruined Matt’s race at Martinsville too. Add to that the blinding Jealousy Hamlin has, in that he has been in NASCAR longer than Keselowski, and Brad beat him to the Championship. I will be surprized if there isn’t major contact between both those hated Penske drivers and Hamlin over the next two races..

Correct. Hamlin has always had his panties in a wad since the day he walked in the door at JGR as a 15 year old. Always belittled and made fun, it was really weird to see. Joey at the time (I don’t know now) was good friends with Busch..he was one of the ones at his wedding. I do not believe Hamlin was there. Joe has never been able to manage to bring about teamwork with his girls, a dysfunctional bunch for sure. Hamlin is relishing this opportunity to bash Logano on his social media..and as usual running his mouth, and when he does this..something always happens after words to make him look like an ass…wait for it. Again my Logano viewpoint, it’s his fault..regardless of the circumstances, it is never anybody else’s fault..is alive and well.

Steve O’Donnell should be suspended for stuffing the word Chase in that statement three times.
The most upset group should be David Gilliland’s team, as it is clear there is a double standard, not that NASCAR has double standards mind you.

They don’t even have single standards.

Guess King Brian must have had Logano on his Fantasy Team this past weekend. How do they justify two races for Kenseth and barely a little touch on the wrist of the Princess?

And I hope Dennis the Menace does do something…………………he owes Logano a couple of shots. At least one for each race he missed afterwards.

Although most render comments here take issue with Matt, I put more stock from the other driver’s views, especially those of Dale Jr.and Jeff Gordon which lean to favor Matt. Kyle Bush’s point that NASCAR looks at the names above the door as a major factor in making its decisions is right on.

Jeff Gordon’s fans know most likely that Matt actually did Jeff a favor in taking out the #22. What a mess this chase is.

One thing no one can take from Matt Kenseth is that he actually won the last championship without a asterisk * beside his name.

This doesn’t go far enough. During his two race suspension I would force Matt to sit in with the pre-race, race-race and post-race NBCSN team to use the words SUNOCO and PLAYOFF between every commercial break. I would suggest to JGR to not appeal the decision so that Matt can race in Homestead and fine tune his craft (wink nod) for the 2016 playoffs.

Too severe, he didn’t do anything that Jeff didn’t to Clint, the penalty should have been the same, both Clint and Joey had it coming

Actually, these incidents were the most enjoyable things I’ve seen at a race in a long time. I would like to see more passion like this from the drivers, not less. I think the drivers have enough common sense to know when it is safe to retaliate, so only the sheet metal takes a beating. Don’t insult their intelligence and don’t stiffel there passion. Let the NASCAR of old be the NASCAR of the present.