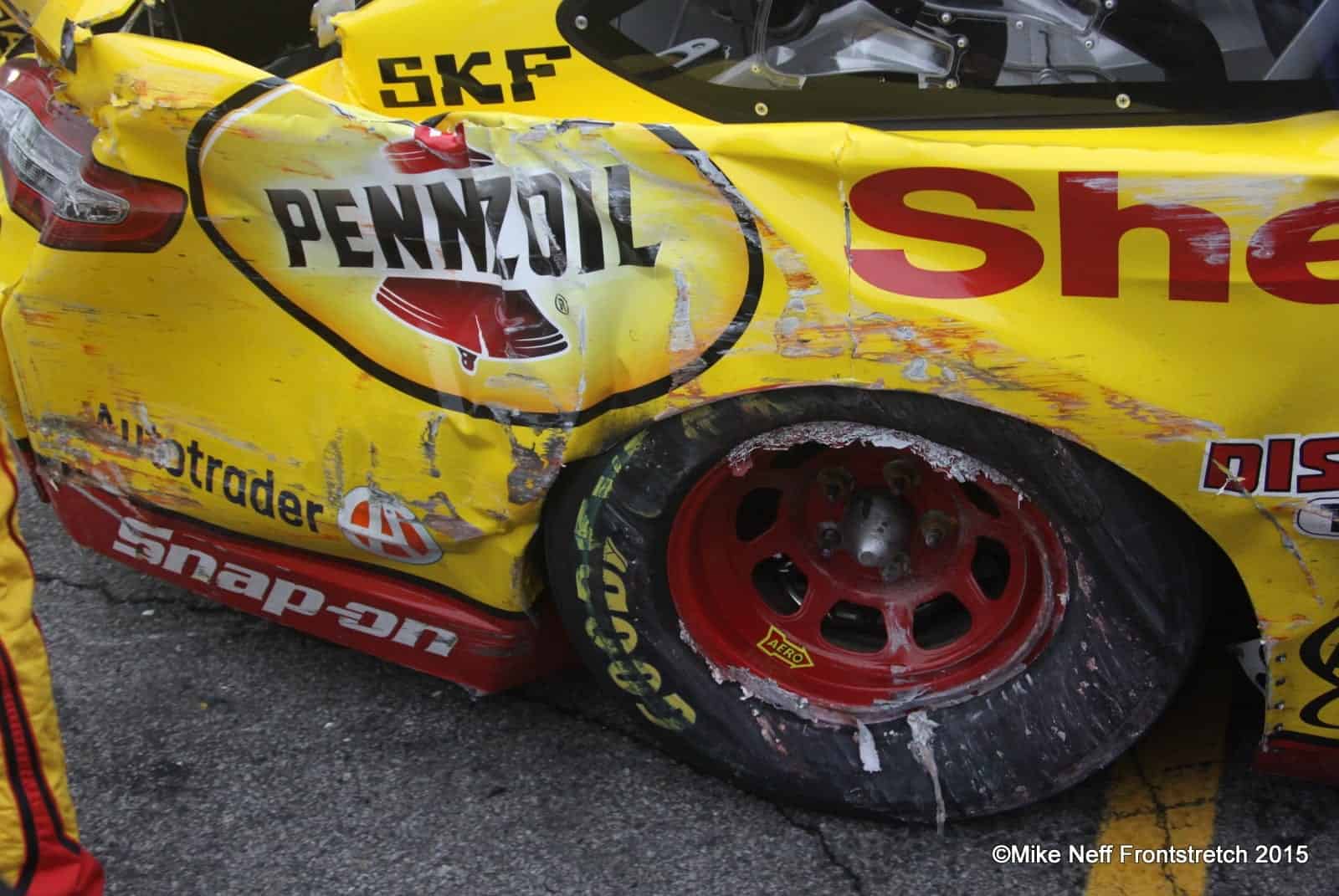 NASCAR dropped the hammer Tuesday on Joe Gibbs Racing driver Matt Kenseth after Kenseth wrecked Joey Logano Sunday at Martinsville Speedway. Kenseth, frustrated with Logano for a crash in Kansas plus his subsequent lack of remorse – and contact earlier in the race – slammed Logano into the turn 1 wall to effectively end his day. Kenseth was parked for the remainder of the race, a moot point since his No. 20 Toyota was destroyed in the incident. Well, Tuesday NASCAR announced that Kenseth had been suspended for two races and given six months probation as their response to the conflict. And while two races might lean toward the harsh side officials made the call that, ultimately, they had to make.

1. Because of the Chase

The Chase – this Chase – changes everything.  It means the incident Sunday wasn’t just about Kenseth and Logano. Under a non-Chase system, it would have been about one driver trying to take away the title he felt was taken from him. But it’s not that simple anymore. While Logano may have taken away Kenseth’s title hopes, Logano’s were still alive. And, more than that, so were the title chances of two of Kenseth’s teammates, Kyle Busch and Carl Edwards. If Logano doesn’t win at Texas or Phoenix, it’s unlikely he’ll climb back into the final round, giving Busch and Edwards a better chance of making it in. Whether that thought even crossed Kenseth’s mind Sunday, and I’d venture to guess it did not, the move affected the championship.

Had NASCAR allowed Kenseth’s move to stand without repercussion it would have sent a message to other teams, loud and clear, that taking out the competition was acceptable. If, say, Dale Earnhardt Jr. still had a beef with Kevin Harvick from Talladega, it would be easy to knock him out of title contention, thereby eliminating one of the biggest threats to teammate Jeff Gordon’s hopes. Team owners could have dredged up every past issue with other drivers, team orders disguised as payback. That was a precedent which simply could not be set if integrity surrounding the title is to remain.

2. Because the two incidents were not the same.

What happened at Kansas and what went down at Martinsville aren’t even in the same ZIP code as far as severity. Kansas was a racing incident, one where Kenseth played a significant role. Blocking is perfectly legal, but doing it too many times usually ends up not working out very well for the blocker. Logano didn’t lift to avoid him; in the closing laps, racing for the win, why should he have backed off and let Kenseth go? It’s a huge stretch in my mind to see Logano causing an intentional wreck.

Take names out of it for a minute. You had two drivers racing for a win. One knew the other was faster and threw a block. Then, he threw another block. It came back to haunt him as the pair made contact; as a result, the other driver went on to win. That scenario has happened more times in NASCAR than anyone can count. Kenseth has been on the other end of the same type of incident, replicating the same behavior as Logano did in Kansas. He’s not the squeaky-clean sainthood candidate some would have you believe (the most infamous issue fans remember is a last-lap incident with Gordon at Bristol Motor Speedway in 2006 as both were battling for a top-five finish). To be honest, Kenseth’s bigger problem should be with Ryan Newman, the driver who at Charlotte put him in this must-win situation in the first place.

Was Logano a jerk not to at least reach out to Kenseth, if not apologize? Well, yeah, he was. But what Kenseth did in Martinsville was little other than thuggery disguised as justice. The move was blatantly intentional. Kenseth wasn’t in contention for the win; Logano was. Kenseth wasn’t even on the lead lap. Did he return to the track after his first incident of the day for no other reason than to wreck Logano, a la Edwards at Atlanta a few years ago? Maybe, maybe not. But his actions were cheap and unsportsmanlike regardless. Did Logano have it coming? Perhaps he needed a lesson taught to him for the arrogance displayed after Kansas; however, to call the incident an eye for an eye was way off base. More like two feet and an arm for an eye….

Do people watch NASCAR for the crashes? I’m sure some of them do. And NASCAR acknowledged that to a degree with its “Boys, have at it” policy in recent years. There should be an aspect of self-policing to the sport. That’s good for all involved and drivers should never be afraid to race hard for a win.

But that does not mean there should never be a line in the sand. “He tapped me three weeks ago, so I’m going to end his day” toes that line on a good day. When it has very possible championship implications for the teammates of the driver in question, it leaps over that line. NASCAR has been pretty reasonable about letting drivers handle things both in and outside their cars, although there certainly have been inconsistencies, like fining just two of the drivers who had physical altercations last year, for instance. Kenseth forced the sanctioning body’s hand. Whether or not Logano had payback coming, it didn’t need to be that. Even taking the championship out of it, Logano could have been seriously hurt and so could someone else had they been involved in the aftermath. Yes, it’s happened at Martinsville. Drivers have lost their lives there; safety isn’t a given.

4. …And they made the right call on Danica, too.

No, Danica Patrick didn’t get the same penalty Kenseth did. And while she deserved what she got after attempting to wreck David Gilliland, she shouldn’t have tried in the first place.

So why no suspension? Neither Patrick nor Gilliland is in the Chase. Taking him out would not have helped Kurt Busch or Harvick. Also, Patrick did more damage to her own car than to Gilliland’s, thanks to the poor execution of her payback move, and that was punishment in itself.

The end result left NASCAR handing out a list of consequences ($50,000 fine, 25 points lost, probation) that fits somewhere in the middle. That’s perfect. Patrick has a temper and has tried to turn on others before, so she has a history. Plus, Kyle Busch was right when he said the name over the door matters. If you don’t drive clean, it will be noticed, and repeat offenders rarely fare well in any justice system. Not penalizing Patrick would have sent the wrong message to everyone; the penalty levied was fair.

This point just can’t be emphasized enough. At the end of the day, if you don’t like the penalty on Kenseth, don’t blame Logano. Blame the Chase and the can of worms opened by the elimination formats. Logano, who has earned more points than any other driver this season, would still have the point lead under a non-Chase tally, and that would make the incident much closer to no harm, no foul. There would have been no need for NASCAR to do anything more than fine Kenseth and dock him a few points. Instead, they created a system where team orders have the potential to be a disaster and they had to take a stand to keep that from happening. Even two years ago, when Gordon dumped Clint Bowyer after Bowyer wrecked him one too many times was a less detrimental incident to the sport. Bowyer went on to beat the car Gordon owns for the runner-up spot in the standings.

Before the Chase, especially this version, it would have been all about Kenseth and Logano. Instead, the current system makes it about Kyle Busch and Edwards and the teammates of every Chase driver as well. Kenseth and Logano could have policed each other if the Chase didn’t exist. Kenseth’s move would have been marginally acceptable (low class, but more acceptable) would it not have had the potential to move two of his teammates forward. Instead, because it does, NASCAR made the call they had to make when they lowered the boom on Kenseth. The championship is enough of a game of chance without being a team orders free-for-all. NASCAR had to put an end to that before it started. Before the Chase, the incident was a blip on the radar. NASCAR’s flawed system blew it up to epic proportions.

23 thoughts on “The Frontstretch 5: Reasons NASCAR Had to Penalize Matt Kenseth”