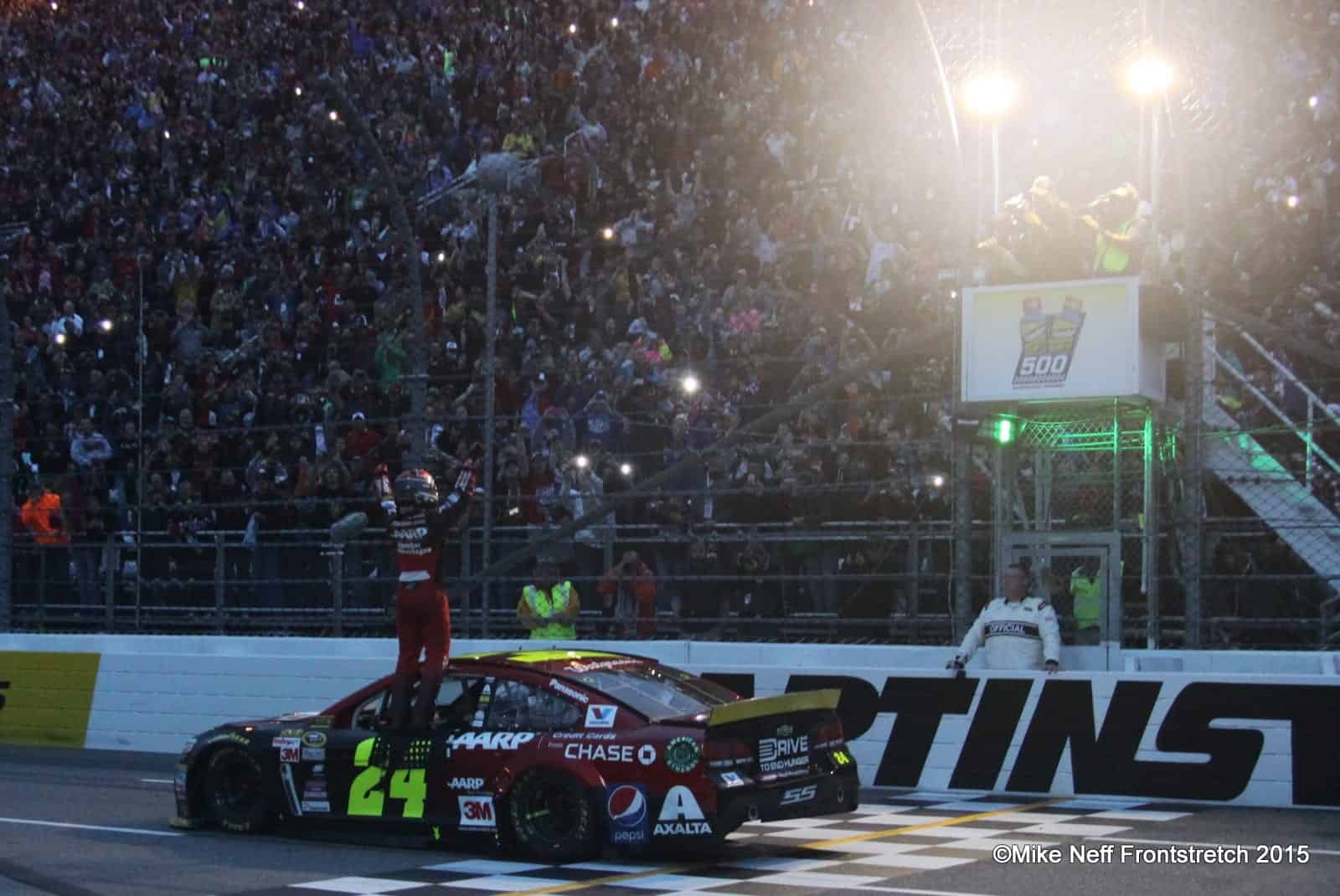 I wonder what fans want to talk about this week. Maybe the fact that Jeff Gordon won under the cover of darkness at Martinsville? What else could have possibly happened to grab anyone’s attention?

Oh, right. There was that whole 10 minutes where two of the sport’s major superstars had their cars turn into a bunch of scrap metal in turn 1 while the fans cheered and booed their feelings. Obviously, the big story that everyone is talking about is Joey Logano and Matt Kenseth. We had a lot of questions about my opinion on the situation, so I’ll handle it here. When you wreck someone, it is with the intention and the knowledge that there will be payback. That’s why it’s probably not a good idea to wreck another driver.

In my opinion, Logano did that at Kansas and virtually took out Kenseth’s championship hopes. Kenseth felt he needed to get even and that’s the simple truth to what happened Sunday. It’s the way NASCAR has always been and that’s what the sport wanted drivers to do when they announced “Boys, have at it” a few years back. Kenseth echoed the call of NASCAR CEO Brian France when he turned into Logano Sunday. When you don’t penalize one driver for wrecking another, you shouldn’t penalize the other for retaliation.

It’s as simple as that. Now, on to your questions from our NASCAR Mailbox… as always, these are questions and comments brought up by you, our longtime readers.

Q: Hi Clayton, There’s a lot of speculation that Kenseth should get suspended for his actions at Martinsville. I was there Sunday and remember Danica Patrick doing a similar thing earlier in the race and was still allowed to continue. Why? – Dave, Richmond, Va.

A: Hi, Dave! Yes, that incident you are talking about did indeed occur when Patrick took a swipe at David Gilliland later in the race as retaliation for an earlier incident. Patrick felt she was taken out by Gilliland and wanted to pay back the favor.

I’m honestly as confused as you are. There’s a couple points to consider here. One is that Patrick was several laps down and took a swipe at a driver who was still running competitively (Gilliland finished only two laps off the pace). I think there’s a base similarity there to what Kenseth did to Logano. Patrick wasn’t parked for the contact, although she didn’t finish either due to her crash damage. NASCAR said it would look at the incident and assessed Patrick a $50,000 fine, a loss of 25 points and probation through the rest of the year.

Is that stiff enough? Considering Kenseth got two races, probably not; if anything, it’s a sign of NASCAR’s continued inconsistency from my perch in terms of handling the rules. Patrick’s pushback was the result of a longstanding feud she’s had with Gilliland not only Sunday but through the years. The duo has been at each other’s throats, both on the track and through the press as early as Patrick’s rookie season in Cup. How is that any different from Kenseth holding a grudge against Logano?

BOWLES: NASCAR “Ruling” Itself Out Of Business?

The second point to consider is that Patrick called her shot on the radio, clear as day. I always give drivers a pass because racing is an emotional sport and sometimes emotions get the best of them. However, her intentions were clear: Patrick was on a mission to wreck Gilliland, openly stating it in a way which Kenseth never did. At least Kenseth tried to say he “blew a tire” instead of “blowing his temper.” That, to me, is worth noting as we deconstruct both penalties and why NASCAR gave a non-Chaser out of the spotlight the benefit of the doubt.

Q: Hi Clayton, Jeff Gordon’s run at Martinsville was one for the ages. In terms of his wins, where do you think this one ranks? Thanks. – George C. – Boca Raton, Fla.

A: Thanks for writing, George. When you have 93 wins, it’s hard to remember all the major victories. However, I think the jury is still out on where this win ranks on Gordon’s list.

There’s no doubt his first one in the 1994 Coca-Cola 600 is up there. If you don’t remember that Memorial Day Weekend classic Gordon was very emotional in Victory Lane, crying in front of the cameras as he broke through after a season-plus of coming close. All three of his Daytona 500 wins rank high, as well and who can forget when Gordon won $1 million back in 1997 at Darlington Raceway? It was one of four consecutive victories in the Southern 500, a race that is always tough to win. I’m sure I’m missing a few along the way.

His win on Sunday remains TBD, though and will be ranked based on what he does at Homestead-Miami Speedway. If Gordon wins the championship, the win will rank much higher based on how it launched him toward a fifth title and his first since 2001. Otherwise? It will hold water as his last career victory but will likely fade into the background over time.

Clayton, going forward in these situations when blaming another driver in a 3 race format. Please look at what happened the week before at Charlotte, then Kansas, then Dega…as that is the only overall picture you can use correctly instead of saying 1 driver in 1 race put the death knoll on the other.

So, if Joey can’t win at Texas or Phoenix and can’t make up the points deficit that Kenseth put him in at Martinsville, you won’t be saying that Kenseth (1 driver) put the death knoll on Joey (the other) at Martinsville (1 race)?
I’m not even a Joey fan and I’ll be blaming Kenseth for killing Joey’s 2015 championship run with the Martinsville incident if he doesn’t make the final four.l
But you are technically right, there are three races in each round so no one race determines who moves on as long as a win gets you in. Still, a bad finish in any one race can keep you out if you don’t win and I find it hard to believe that you won’t be blaming Kenseth if Joey doesn’t make the final four.

Phil H
Reply to  Bill B

when Logano spun Kenseth at Kansas, Joey had 4 wins. Kansas gave him 5 tying him with Kenseth.

Logano surpassed Kenseth with the checkers at Talladega and had 6 wins.

These two are and have been the teams to beat this season with a combined 11 wins. So why can’t we blame Joey for putting the death knell on Kenseth at Kansas? Your second paragraph can easily be said for Kenseth just as well.

KB
Reply to  Bill B

Bill I would love to explain my comment further to you, but after your nasty post to me last week why should I bother. I annoy the hell out of you, I get it. You have your passions…the lucky dog, double file restarts, Jeff Gordon, the horrors of the Chase and I have mine. I don’t recall ever attacking you and if I did, I apologize. This is not the first time I got in your crosshairs.

All I am saying is that when you wreck a driver you should think about the consequences.Thanks for reading guys! Also enjoy reading your comments.

Regarding the Danica retaliation…I remember seeing Gilliland basically drive her car into the wall earlier in the race, just not as enthusiastically as Matt did to Joey. Can’t say I blame her for wanting some payback.

Aside from the obvious, I do think that Kenseth ought to have expected this outcome based upon the implications to the racing. There were instances in the past that may be similar but none as severe.
Listening to Brian France on the Sirius NASCAR channel talk about having the outcomes of races altered by anything but hard racing was telling.
And Kenseth probably knows better.

kb, you don’t have to explain anything to me. You don’t annoy the hell out of me. We agree with each other 90% of the time. I just get tired of the constant Logano defending. There’s two sides to every story and Joey isn’t always right or the victim. I get it, he’s your driver and you are passionate. You shouldn’t care what I say, I’m just another faceless idiot on the internet. But I still bet you blame Kenseth if Joey misses the final four of the chase. I know I will.
As for the time you were “in my crosshair” where I tried to be diplomatic when I didn’t agree with you, you said I was condescending. So this time I made sure I wasn’t condescending and now your feelings are hurt. Apparently you can’t take anyone disagreeing with you. I tried both ways diplomatic and in your face..

By the way, if you recall, Logano won a fuel mileage race the next week which pretty much shot holes in your NASCAR is always against Logano theory. Anyway, how would you like me to comment on the 10% of the time we don’t agree on something.

Clayton doesn’t see it your way kb therefore he is probably an idiot.