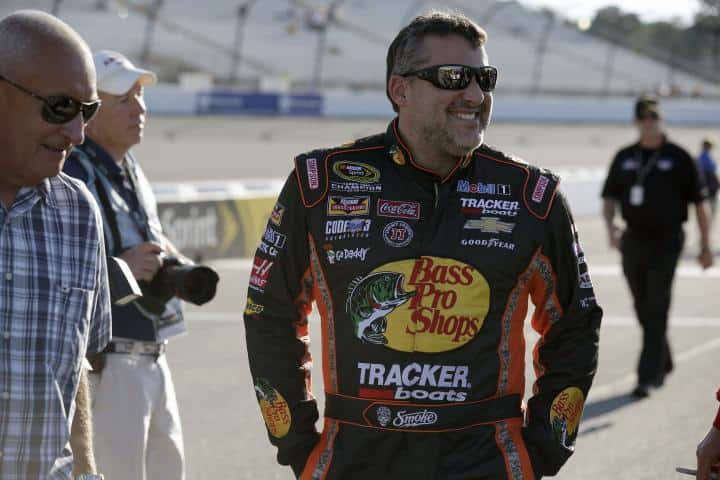 Twitter is full of everyone from fans, media, drivers and everyone in between sharing their opinions on Matt Kenseth‘s two-race suspension. Regardless of which side you stand on for both incidents, this simplified breakdown from our own Vito Pugliese says it all.

It’s #NationalSandwichDay!! I’m getting a @jimmyjohns #10 no tomato to celebrate. pic.twitter.com/356Gz9bknY

How did Kevin Harvick celebrate national Sandwich Day? By ordering a sandwich from his sponsor Jimmy John’s, of course! We can only assume a lot of Harvick fans will now be ordering a number 10 whenever they can from now on (without the tomato.)

NASCAR Wonka successfully applied the Panthers slogan into NASCAR terms by sending out this tweet on Monday. Pretty sure the NFL’s Carolina Panthers probably did not have this idea in mind when they came up with it, though….

So @JeffGordonWeb can take it easy at Texas and play with the giant steer the track gives him as a retirement gift. pic.twitter.com/cfC9s9X9dt

NASCARcasm had some fun using Photoshop on Monday and created this photo of Jeff Gordon and his son around a Texas longhorn. However, we’re pretty sure Texas Motor Speedway will not be giving Gordon a cow or anything like it!

I think I will do this next time and maybe get an interview @NASCARonNBC for @McDonalds, @Cessna @TeamChevy. pic.twitter.com/gyvnu1b5Ql

Jamie McMurray has found a new way of promoting his sponsors on the racetrack. McMurray sent out this hilarious tweet on Monday that he’s willing to run around like Ricky Bobby while doing an interview on NBC. We’ll see if he really does it!

It was not a dream! It really happened ? pic.twitter.com/L7NUqtDdGq

Gordon’s wife Ingrid Vandebosch shared some of her favorite photos taken just after Gordon’s win on Sunday at Martinsville Speedway. We’re almost certain these photos will end up on their holiday cards. Nothing like a trip to Victory Lane to commemorate a great year….

Happy for Ned Yost and the @Royals today.

Seeing @JeffGordonWeb win today was the highlight of the 2015 NASCAR season. #respect

Tony Stewart offered his thoughts following Gordon’s win at Martinsville Speedway Sunday. Stewart sent out this tweet congratulating the four-time Sprint Cup Series champion on making the Final Four at Homestead. It’s further proof that racing is one of the biggest families in all of sports.

Danica Patrick shared her Halloween costume Saturday morning at Martinsville Speedway. Who did she dress up as? Herself, of course!

My mom dialed us in back in the day.#TBT pic.twitter.com/leMz35CsY8

Jimmie Johnson shared a throwback family photo of himself dressed up for Halloween when he was a kid. These special looks into an athlete’s past before he became famous can bring fans even closer; that’s certainly something the sport needs today.

We’re pretty sure Stewart easily won the best costume of any NASCAR driver this Halloween and quite possibly of all time. What did Stewart dress up as? Well… see the above photo Kenny Wallace shared on his Twitter page! You’re welcome!