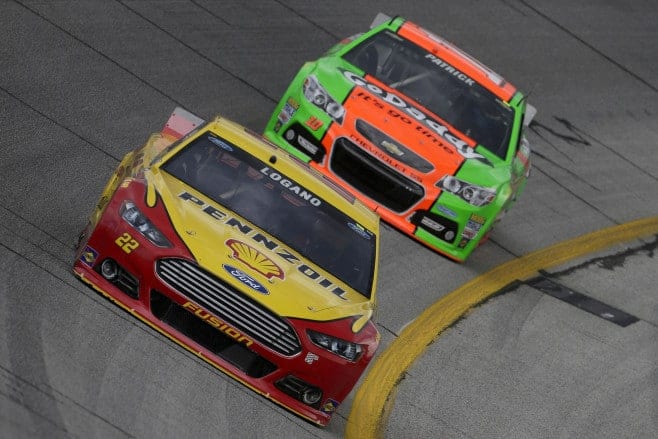 Context can be a dangerous word but it is a word that is quintessentially appropriate to the asinine punishment meted out to Matt Kenseth by the powers that be. From all points across the NASCAR diaspora, the instantaneous reaction to Kenseth’s punishment after his wreck with Joey Logano last weekend was one of shock and surprise at the severity of the sentence. Unfortunately, the response has not simmered a day later.

I don’t think anyone expected the veteran Joe Gibbs Racing wheelman to get off “scot free” – a fine, a loss of points, probation – but two races seems especially draconian. As the well-respected, always-erudite ex-driver Ricky Craven noted on ESPN in the immediate aftermath of the ruling coming down, “I think we made a terrible, terrible mistake today.”

The man who won in five separate NASCAR divisions was absolutely correct.

There are so many facets to this confluence of circumstances, many of which have roots in the infamous 2010 proclamation from NASCAR vice president of competition Robin Pemberton of, “Boys, have at it… and have a good time.” Since that statement was made there have been a number of occasions when the boys (and girls) have definitely had at it. Frankly, there have been times, as with Jeff Gordon and Clint Bowyer at Phoenix or Kevin Harvick wrecking the field at Talladega, when they’ve gotten away with it. Put another way, they’ve had the proverbial good time.

In the most recent case-du-jour, the one that has Kenseth in trouble the whole issue started with five laps to go at Kansas Speedway. It was then when the wily veteran was fending off Logano, the young pretender to the crown for the race lead. Logano, the quicker car on the track at the time, decided enough was enough and spun out Kenseth; that got the party well and truly started. From there matters escalated, fueled by the 24-hour Twitter cycle and more chatter than a security analyst would know what to do with, until it ended with revenge being exacted and two junked cars in the SAFER barrier at Martinsville, the best track in the sport. (Side note: Only in NASCAR could the smallest, flattest and slowest track produce the most compelling racing each and every time we visit.)

For Kenseth, pending what will likely be an unsuccessful appeal, it will mean the end to a 16-year, 571-race consecutive streak of Cup races. That’s second only to Sunday’s ecstatic race winner Gordon, who has just three races left in his illustrious Hall of Fame career. But you suspect that while Kenseth might never utter another word about it in public, he will be satisfied with taking his shot – that he adhered to the driver code. Kenseth will take his licks, watch a couple races from his couch and be back next year, a perennial threat to win it all. It wouldn’t even surprise me to see him return and win the final race of the season at Homestead-Miami Speedway. What price, I wonder, would people pay for Kenseth and Logano to be racing for position in the waning laps? That should get Brian France his mythical game 7 moment.

I’m not criticizing NASCAR for making a call – the sanctioning body felt it had to do something – but what concerns me most about this decision is the dangerous precedent it sets. What defines the invisible line between right and wrong? Is it only something that can occur when you’re racing for the lead? Are there new parameters? Will NASCAR share these with fans, teams, drivers or maybe the driver council?

Of course not. It’ll argue that each case is unique and therefore needs to be judged on its own merit. But in this particular instance that’s a line of argument I find hard to reconcile with a two-race ban. Context is key; Kenseth was reacting to Logano’s decision to dump him and all but end what had looked every inch like it could be a championship season. I don’t think Logano had to apologize for his actions but he could have been a lot less smug and he could have made even a token effort to reach out (something he clearly didn’t do.) Might that have made a difference? Dale Earnhardt Jr. and Gordon, prior to Martinsville, said as much in media interviews. And those are two individuals that know a thing or two about what it means to be a NASCAR driver.

Mind you, if you’re Danica Patrick, it’s absolutely fine; you can clearly say on a public channel of communications that you’re going to wreck a driver and then go ahead and – sort of – do it, then get away with what amounts to, for her at least, a paltry fine and an irrelevant loss of points. Let’s be fair: if she finishes the season 24th or 27th, it matters not one iota. She’ll be back next year tangling with David Gilliland for 29th place, two laps down. (Side note number two: if you’re going to have at it, Danica, have at it properly).

So therein for me lies the problem: Two similar, unrelated incidents in the same race and two completely different decisions. And that’s what concerns me the most, because it starts to border on the farcical, and that’s not good for the sport at all. Sunday’s race was a prime example of what NASCAR deserved to get with this new playoff format. The pressures on each of the Chase drivers in these small, sample size segments make for desperate decisions and courses of action that might not happen in the regular season. In its desire for a winner-take-all final race, there were always going to be consequences. And those consequences came home to roost in a style that did no one any favors – least of all the powers that be.

In the time I’ve been following NASCAR I’ve had maybe a handful of moments when I’ve considered jacking it in and doing something else on Sunday afternoons. I’ve spent thousands of hours writing columns, speaking on radio shows and generally evangelizing a sport I’ve come to deeply love. But I have to be honest: Over the last couple days I very seriously considered giving it up. If the governing body is going to disregard context and consistency, instead setting dangerous precedents that it’ll now have to enforce, I’m not sure I want to be a part of it all anymore. And I know I’m not alone in thinking that. Decisions that have elements of farce turn fans away, and let’s be fair, that’s not something NASCAR can afford to do right now.

I hope this decision doesn’t come back to haunt the sport, but I can’t help but feel it just might.

Danny starts his 12th year with Frontstretch in 2018, writing the Tuesday signature column 5 Points To Ponder. An English transplant living in San Francisco, by way of New York City, he’s had an award-winning marketing career with some of the biggest companies sponsoring sports. Working with racers all over the country, his freelance writing has even reached outside the world of racing to include movie screenplays.
@dannypeters
Previous Happiness Is… Martinsville, Wonderboy & the Left Coast
Next Nitro Shots: Champions of Diversity