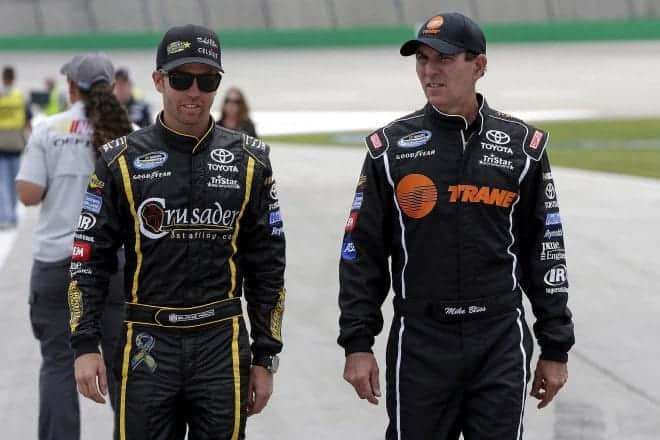 There is a familiar name on the NASCAR Xfinity Series entry list this weekend at Texas Motor Speedway.

Mike Bliss has over 300 career NXS starts and is a name that was once synonymous with this series. Bliss will return this weekend at Texas Motor Speedway driving the No. 14 Toyota for TriStar Motorsports, replacing the recently departed Cale Conley.

Bliss drove eight races for the team early in 2015 before the organization simply ran out of seats. In April, the team hired Eric McClure from JGL Racing to drive. McClure brought sponsorship from Hefty and replaced Bliss, forcing him to take a back seat to others bringing sponsorship. Since then, Bliss has remained with the organization but in a different capacity.

“I’m still with them, of course,” Bliss told Frontstretch in May about his situation at TriStar Motorsports. “We might have some races. We might run another entry for some of the bigger races. As of right now, I am still employed by them. I’m kind of helping out with the other drivers.”

When Conley and TriStar parted ways, Bliss was in line to take over the No. 14. He will be teamed with veteran racer David Starr, Blake Koch, Jeff Green and McClure as the team runs four cars in this weekend’s event.

For Bliss, it’s a return to a series with which he’s familiar. He has two career victories there, both of which came at Charlotte Motor Speedway. Bliss won the 2004 Lowe’s Presents the SpongeBob Square Pants Movie 300 driving the No. 20 Rockwell Automation Chevrolet for Joe Gibbs Racing. It was a caution-filled event, but Bliss found himself in the fourth position late in the going. He passed Mike McLaughlin on the inside for third and set his sights on leaders Jimmie Johnson and Matt Kenseth. That’s when Bliss made one of the best moves in his career as he ducked his No. 20 Chevrolet to the inside of turn 4 and passed both drivers, taking the lead as they came to the stripe and eventually holding off both of the Cup veterans to win his first career race.

In 2008, it was with Phoenix Racing that Bliss recorded his second career victory during the May race at Charlotte. Bliss led 19 laps en route to victory after rain shortened the event to 170 circuits instead of 200.

Bliss has been with TriStar since 2011 and has helped the team become a constant in the series. He finished an impressive eighth in points in 2012 and hasn’t run outside the top 15 in points in the series when he has run a full schedule.

Bliss’s rise through the NXS has been unusual but also an impressive one. Now, we’ll get to see him back in the division he’s been a vital part of over the past few years. Keep an eye on him.