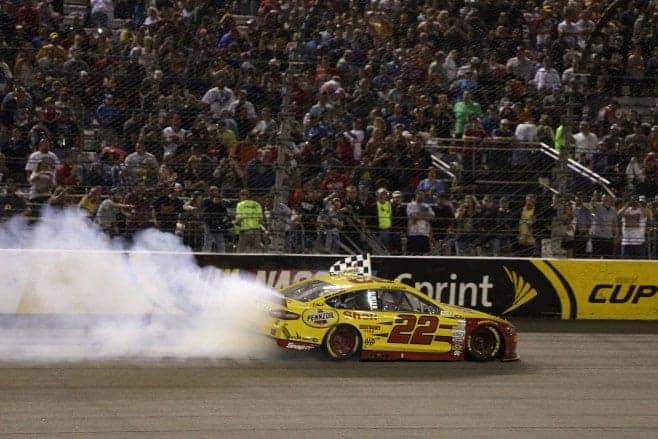 WILL JOEY LOGANO MAKE UP FOR LAST WEEK’S DISAPPOINTMENT WITH A WIN?

Joey Logano was 47 laps away from making history last weekend. Leading 207 laps at the Martinsville paperclip, the driver of the No. 22 was intentionally crashed in turn 1 by Matt Kenseth following a stretch of races in which the two tangled on the track. The damage relegated Logano a 37th-place finish and ended a winning streak of three races. What’s worse for the Team Penske driver is that it placed him dead last in the Chase grid, with only two races to put himself into the top four or win.

Luckily for Logano, this weekend’s race is at Texas Motor Speedway, a track that he has been on fire at since switching from Joe Gibbs Racing to Team Penske in 2013. He boasts an average finish of fifth in the last five races at the track, including four top fives and a win in 2014. If there’s any track the Connecticut native wants to visit following the heartbreak of Martinsville, it’s Texas.

And following the conflict with JGR driver Kenseth, expect Logano to be hell-bent on beating the four Toyota drivers on the intermediate track type that all five have excelled at this season. It’s a David vs. Goliath situation right now, and Logano, like his biblical counterpart, will slay the giant on the way to a spot in the Championship 4.

WILL WE SEE DRAMA AFTER THE CHECKERED FLAG FALLS?

Recently we’ve had three weeks, three races, three highly emotional outcomes. We’ve seen mild-mannered drivers such as Kenseth and Trevor Bayne speak out against manipulation (and do more than just speak out). We’ve seen drivers critical of NASCAR continue to speak out. We’ve seen smugness and arrogance, anger and vengeance, desperation and denial. Forget the Wild Wild West. It’s more like a soap opera out there.

And we’ve still got three races left this season, including this week’s episode at Texas. If last year’s running is any indication, we’ll see fireworks after the race. While Jeff Gordon won’t have to worry this year about contact on a late restart dooming his Chase hopes, seven other drivers will be holding their breath through the 334-lap ordeal.

With famously aggressive drivers Kyle Busch, Kevin Harvick, Brad Keselowski, Kurt Busch and Logano still in the title hunt, it is almost certain that one of them will drive a little hot and get themselves — or even their competition — into trouble. And with all of them passionate about their sport, if something goes wrong expect a discussion — verbal or physical — after the race.

While there are five more volatile drivers still around, there are two others in the Chase that you can bet are hoping tempers fly among the five: Carl Edwards and Martin Truex Jr.

Edwards has already benefited from the hard racing of those in the Chase. The No. 19 was involved in an accident before the midpoint of the race and spent the majority of the race a lap down, looking as though he’d be in a hole in the points. Then came an accident between Kurt Busch, Keselowski and Kenseth. Not long later, Logano found the wall.

When it was all said and done, he found himself fifth in the Chase grid. With three wins at Texas, Edwards is hoping to run his own race and if he’s not able to win, stay out of trouble with the other six drivers who are looking to advance.

For Truex, he’ll look to improve upon his ninth-place finish at Texas in the spring. He hasn’t made much noise during this Chase, but like Ryan Newman last year he expects that to be his ticket to the finale. If he can make it that far, watch out. Homestead is one of Truex’s best tracks. He’s finished in the top 10 70 percent of the time.

So while the fireworks are what will sell more tickets, it’s the quiet ones that you have to watch out for. Keep the No. 19 and the No. 78 on your radar.

HOW WILL ERIK JONES FARE IN HIS THIRD SUBSTITUTE ROLE?

With Matt Kenseth losing both appeals Thursday, JGR will hand the wheel of the No. 20 to its wunderkind Erik Jones for Texas. While Jones is only 19, he’s quickly made a name for himself in the NASCAR world, with six Camping World Truck Series victories and two more in the Xfinity Series.

This is a huge opportunity for Jones, not only in that it gets him additional experience racing in the big leagues (something that he can take with him to the minors for the rest of the season and through his full-time NXS ride next year) but that it shows potential sponsors who they can partner up with when Jones moves to Cup full-time in the next couple of seasons.

He’s been in this position before, and he’s performed admirably each time. Whether it was filling in for Denny Hamlin at Bristol or his one-off race in Kyle Busch’s No. 18 at Kansas, Jones exceeded expectations and showed that he will play a huge role in the future of this sport.

So how will Jones do this weekend? Don’t count out a top-10 finish. He was running comfortably in the top five at Kansas, a track similar in configuration to Texas before crashing out, and won in his lone NXS start at Texas earlier this season. Given JGR’s dominance on the intermediate tracks this season, a finish in the top quarter of the field isn’t wishful thinking; it’s a real possibility.

If Logano does, Matt will have one more chance at Homestead for his throttle to jam just as Logano laps him.