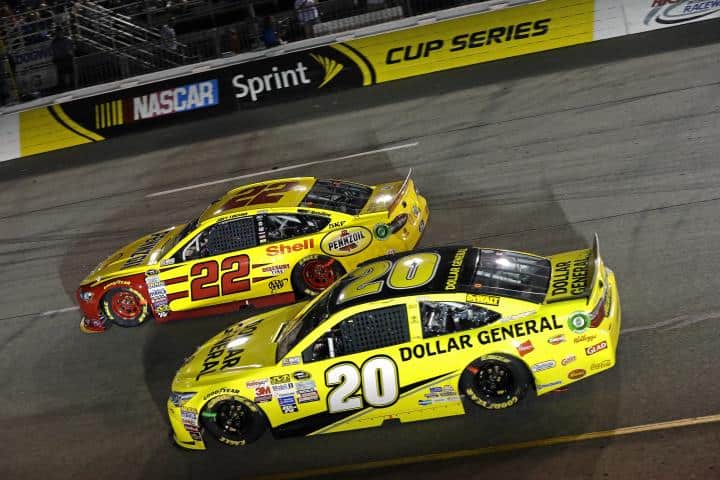 Did NASCAR make the right call with a two-race suspension levied against Matt Kenseth after Kenseth intentionally wrecked Joey Logano at Martinsville? Who or why not?

Amy Henderson, Senior Editor: Buckle up, Buttercup, and welcome to the new Chase. Thanks to the format, NASCAR had little choice but to come down heavily because of the team implications in this Chase format. NASCAR made the right call given the circumstances. Kenseth’s move was cheap, but do I think it would have been heavily penalized under a full-season format? No way. Under this one? Absolutely had to happen before things got out of hand.

Mark Howell, Senior Writer: Kenseth is a victim of NASCAR’s own misguided marketing rhetoric. Don’t suggest that the “boys have at it” if you actually frown upon the practice and just how such on-track justice is doled out. The topic has (and will be) argued for months to come, but the precedent set by NASCAR has pushed conflict past common sense. We’ve seen retaliation, in one form or another, for the past few years, yet we’ve never seen such an example being made of one driver (who, by the way, seemed justified in his actions). While the cause for Kenseth’s actions is being ignored, NASCAR’s own mantra is being touted as the Gospel of Brian. I believe NASCAR realizes it made an error here (et tu, Danica Patrick), but to reverse its own call would embarrass the sport even more.

Zach Catanzareti, Contributor: I strongly believe the decision kept the integrity and credibility of the sport. That kind of stuff belongs at the madhouse of Bowman Gray and not on the top level of stock car racing in the world. On the subject of those complaining it was too harsh, I am very certain if NASCAR did nothing at all – which fans apparently were asking for – they would be still complaining, this time even more about the sport becoming a Wild Wild West with the sport allowing such acts to occur. Someone like Denny Hamlin seemed to change his stance on it, which makes me wonder. And on the Patrick incident, I think she shouldn’t have received any penalty. That was just a typical in-race incident of payback. It had no championship-fixing intent and was not targeted for weeks while the driver was out leading the race. We’ve seen it time and time again – including last year at Martinsville with Kasey Kahne and Brian Vickers wrecking each other three times. I do not want to lose that aspect of drivers banging others during the race because they feel they were wronged earlier.

Defending CWTS champion Matt Crafton won the Kroger 200 at Martinsville. Just 10 points out of the championship lead, was the win a statement from Crafton, and can he win three in a row?

Howell: If anyone can win three races in a row, it’s Logano…. oops! I mean Crafton. Crafton has momentum on his side as the schedule draws to a close. It seems like good timing and a good opportunity for Matt to repeat as the CWTS champion.

Catanzareti: He’s been a big contender all year. I can see that as a statement win as we head to one of his better 1.5-mile tracks of Texas. If Erik Jones is in the No. 20 Cup seat, I believe that adds enough additional pressure for Jones that Crafton’s veteran experience will pounce and surely win a third crown.

Henderson: I say yes on both counts. Crafton is a very talented driver with experience on his side. He keeps his nose clean and makes few enemies. He’s also been in title races before and knows how to handle himself. He’ll have to race hard to make up a little ground, but he’s absolutely capable.

Jeff Gordon won for the 93rd time in his legendary career last week at Martinsville. As Gordon steps away from the sport, how will fans remember him, and what legacy does he leave behind?

Catanzareti: I believe every race fan, media member, crew member and so on will have their own little slice of memories from Gordon. What I think will stand out most was his attitude toward helping others with the Jeff Gordon Foundation and how much he has brought NASCAR into modern times, bringing the sport from farmers and southerners to iPod-playing Californians.

Henderson: I’ve seen Gordon earn the respect of fans over the years, including many who once had the “anyone but Gordon” mindset in the 1990s. The crowd reaction to his win Sunday was phenomenal to experience; many stayed right where the were for a very long time afterward, cheering for a legend of the sport. I think that about says it all about Gordon, who will leave behind one of the finest careers ever seen in NASCAR, and the one who spans the gap between the old days and today. And while it’s by far not his greatest accomplishment (those came on track), he’s also a championship car owner.  Not a bad career, all in all.

Howell: Gordon’s legacy will be his ability to push NASCAR firmly into the realm of recognized, mainstream professional sports. His youthful charm and good looks attracted girls and women toward NASCAR Nation (as in my then-10-year-old niece who’s still a Gordon fan today), and his comfort with the media made him perhaps our sport’s greatest spokesman. Gordon helped NASCAR grow both on, as well as off, the track.

With NASCAR’s ruling on Kenseth, will his rivalry with Logano continue to fester, or will the pair move on with a clean slate in 2016?

Henderson: I think it’s over for now; the stakes are simply too high. Could old wounds be reopened next season? Absolutely. If the two get together, even if it’s just a product of racing, there could be enough sparks to reignite the fireworks. That’s not a given, because NASCAR and their sponsors will be watching closely, but it won’t take much to set them off if one feels wronged by the other again.

Howell: Both Kenseth and Logano should have their hands full with the new low-downforce package come 2016. While it’s unlikely they won’t sit down for coffee and quiet conversation, it’s also unlikely that they’ll continue their current feud. Time heals all wounds (and straightens all caved-in fenders).

Catanzareti: Boy, I hope Kenseth can let it go. I feel confident the dust has cleared and that Logano will continue with his same attitude that I personally enjoy. He’ll go out there and fight toward Homestead and hopefully will reach out to Kenseth to settle this whole mess.

19 thoughts on “Friday Faceoff: Did NASCAR Make the Right Call?”