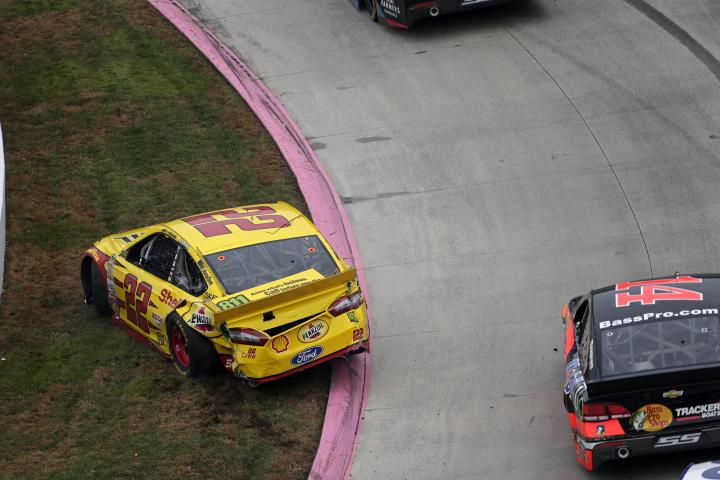 Is Matt Kenseth vs. Joey Logano already one of the biggest moments in NASCAR’s history when it comes to driver feuds?

It’s tough to proclaim something an instant classic or already infamous in the moment or shortly thereafter. Generally, emotions and feelings run so rampant that, once the euphoria wears off, one looks back on a single moment in time and often thinks, “Well, that wasn’t that interesting, really.” You’ve certainly seen plenty of movies like this – enjoyable in the moment, perhaps you didn’t stop yapping about it for a week after, but as time goes on, its immaculate appeal seems to wane.

But in the case of Kenseth vs. Logano at Martinsville Speedway on Nov. 1, 2015, it’s probably safe to say it’s a moment NASCAR fans will remember for the rest of their days and will also enter into the mindset of new fans who join the spectacle years down the road.

Why? Simple: We’re still talking about it. And no, I don’t just mean the media, though each and every publication out there is guilty. A good website, newspaper, magazine (or whatever the form) is, if it covers news in any way, chained to what the general public is discussing. And boy, is said public having some discussions. They’ve been at it since before the checkered flag flew and Jeff Gordon was proclaimed the winner, paused momentarily to bask in the glow of what could be the future Hall of Famer’s final win (at this point, you have to address it as though it could be the last, with just three races left in that illustrious career), and then returned to debating, shouting, trolling, whatever the expenditure of energy may be.

It’s Thursday now (and probably Friday as you’re reading this). All three major NASCAR series have moved on to Texas Motor Speedway. The storylines around who can win in Fort Worth, coupled with the quickly approaching end of the season and crowning of the 2015 champion, are plentiful. Or, rather, they would be, if anyone wanted to talk about them.

See, that’s the thing about Kenseth vs. Logano: Not only is it still being discussed, you also don’t see too many people hanging up the gloves and deciding to move on to the next topic because they’re at such an impasse with their fellow viewers that continuing to drive their point home is utterly useless. Social media, Internet comment sections, even around the water cooler is exemplary of that (yes, I saw someone discussing it around an actual water cooler this week. Right?!). People are still talking. A lot.

Perhaps a bit of that is owed to the NASCAR appeals process – or rather, the fact that it was used in this instance. Since Kenseth and Joe Gibbs Racing are appealing the suspension and probation, the 24-hour news cycle continues to include quick, intermittent news bites about the status of Kenseth’s appeal along with the usual opinion pieces.

But there’s also the gravity of the situation. In the past, the boys-have-at-it mentality has seemingly indicated that something along the lines of Kenseth’s action would be tolerated, or at least given a minor slap on the wrist. Instead, there’s the idea that NASCAR has again been wishy-washy with its own rules by making an about-face on previous precedents with the two-race suspension and six-month probation. Had this been the usual protocol when a driver wrecked another – especially when it was a non-championship-contending driver crashing not only the race leader but also the championship favorite – chances are it could have been less discussed.

Except even without the Chase implications and the suspension/probation, I think it still would have gone down in NASCAR lore. It was simply one of the more blatant examples of driver payback, whether Kenseth wanted to own up to it or not. And if it was accidental, then the sheer sight of the championship leader being wrecked out of the race by a laps-down competitor with whom said championship leader had had a not-so-swell relationship would be story enough. The broadcast was right on the action as it happened, which is the absolute best kind – rather than getting a play-by-play on what happened via a replay, the announcers have to call it in real time, and boy, is the reaction often entertaining. This one was no different.

Biggest of all time? Eh, it’s still too early to say. But I do think it’s safe to pencil in this feud as one of the craziest in NASCAR history. The only thing that’d make it more immortal? If they’d been running for the lead when it happened. Can you imagine?

Hell no, more like one of the many pimple’s on the butt of this once great sport.

Of course Joey’s mom would have an opinion like this.

Gee man, give the acid attacks a rest will ya!

Thanks Ken, it is a troll. I don’t understand the enjoyment these ass wipes get ripping immaturely on someone constantly. The aren’t even original with the name calling, they got it from the nice guy Bill B.

Yeah, well you’re a real pleasure too kb. No one would have latched onto that “Joey’s mom” if there wasn’t some truth to it. Get over yourself and take a pill.,

This race will be remembered for everything that happened in it both the good and bad. And if you don’t think so, then just think about how NASCAR will continually use footage from this race in their commercials for the next decade burning it into the collective memories of NASCAR fans and non-fans who have to continuously endure NASCAR commercials while they are watching the sport they care about.

As for whether it is “classic NASCAR” or not, I’m not sure because I don’t know what that means.

A year from now only a small percentage of the people will remember it if you dont give them a hint. Even now its only been less than a week but the premise of this story is that we’re still talking about it. Time goes on, and the old stuff gets pushed to the back.