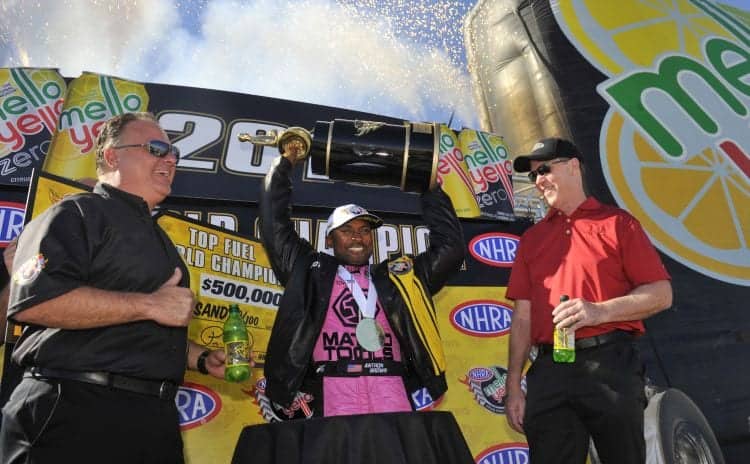 Recently, I overheard a colleague talking about a situation where someone who knew he covered NHRA called out the league for not having a diversity program. This individual is absolutely right; the NHRA has no such program, no special incentive to put diversity drivers in a car, no audition process to identify potentially talented diversity drivers and groom them to move up the ladder.

And that’s completely fine, because the NHRA has no need for a diversity program.

Diversity is organic and it’s already out there. Proof of that comes in the form of the two drivers who clinched NHRA world championships last weekend. Antron Brown is your 2015 Top Fuel champion while Erica Enders-Stevens successfully defended her title and repeats as the 2015 Pro Stock champion.

In case you don’t already know them, they are the ones pictured above and to the right: Brown is African-American while Enders-Stevens is female. Brown won seven races en route to his title and Enders won eight. Each has one more event to add to that total. Brown has totaled 54 victories and Enders 20 in their career, by the way, so they are pretty used to winning.

These drivers aren’t an anomaly, a fact that’s clear from looking around at some of their fellow competitors at the sportsman and junior dragster ranks. Yet if you look at history, NHRA wasn’t always as diverse either. As a matter of fact, Shirley Muldowney was trying to blaze a trail in the same era as NASCAR’s Janet Guthrie. So why did diversity just seem to thrive in the NHRA, the sanctioning body that didn’t build a whole program to try to make it happen?

There are some folks in Daytona that would love to know the answer. However, whatever that answer may be, it’s not because of a diversity program.

Driver of the Week: Richie Crampton

2014 – Won two races, including the Chevrolet Performance U.S. Nationals; one No. 1 qualifier; qualified for championship Countdown; won the Automobile Club of Southern California Road to the Future award as the top NHRA rookie driver.

Some Things Most People Don’t Know About Richie: Crampton has never lost when he’s made it to the final round. He’s not from around here, although most people by now probably know he is originally from Australia. Richie was so passionate about the sport of drag racing and particularly the Top Fuel cars that he came from the other side of the world to pursue his dreams.

“Drag racing in Australia is very popular. Obviously, it’s smaller scale. There’s less cars, less sponsorship opportunities and less racetrack venues. Australians love drag racing and there’s a pretty big following and that’s kind of where I got my feet wet. I started drag racing when I was 16 with my family, with my dad. One thing led to another and I really wanted to be around a Top Fuel car and work on one. I ended up getting a job with a team in Australia that traveled to the U.S. to compete for 18 months so I came over here as a crew member on an Australian team. We had some mixed success and when they decided to head back to Australia I was able to find another job out here working for Don Schumacher Racing.” – Richie Crampton, explaining how he ended up drag racing in America

OK, if you are a faithful reader, you might point out that we profiled Crampton earlier this season. You would be right, but when we ran the earlier profile, we did not have this video. Richie took a few minutes at zMAX Dragway in September to share a crazy racing moment with us.

Number of the Week: 2

The number of championships now on record for both Brown (Top Fuel, 2012 & 2015) and Enders-Stevens (Pro Stock, 2014 & 2015). Both clinched their respective category championships last weekend in Las Vegas.

This is it! Just one more race left on the 2015 schedule. The NHRA takes this weekend off before wrapping up their year at Pomona with the Auto Club NHRA finals Nov. 12-15. This event will also mark the final show on ESPN.