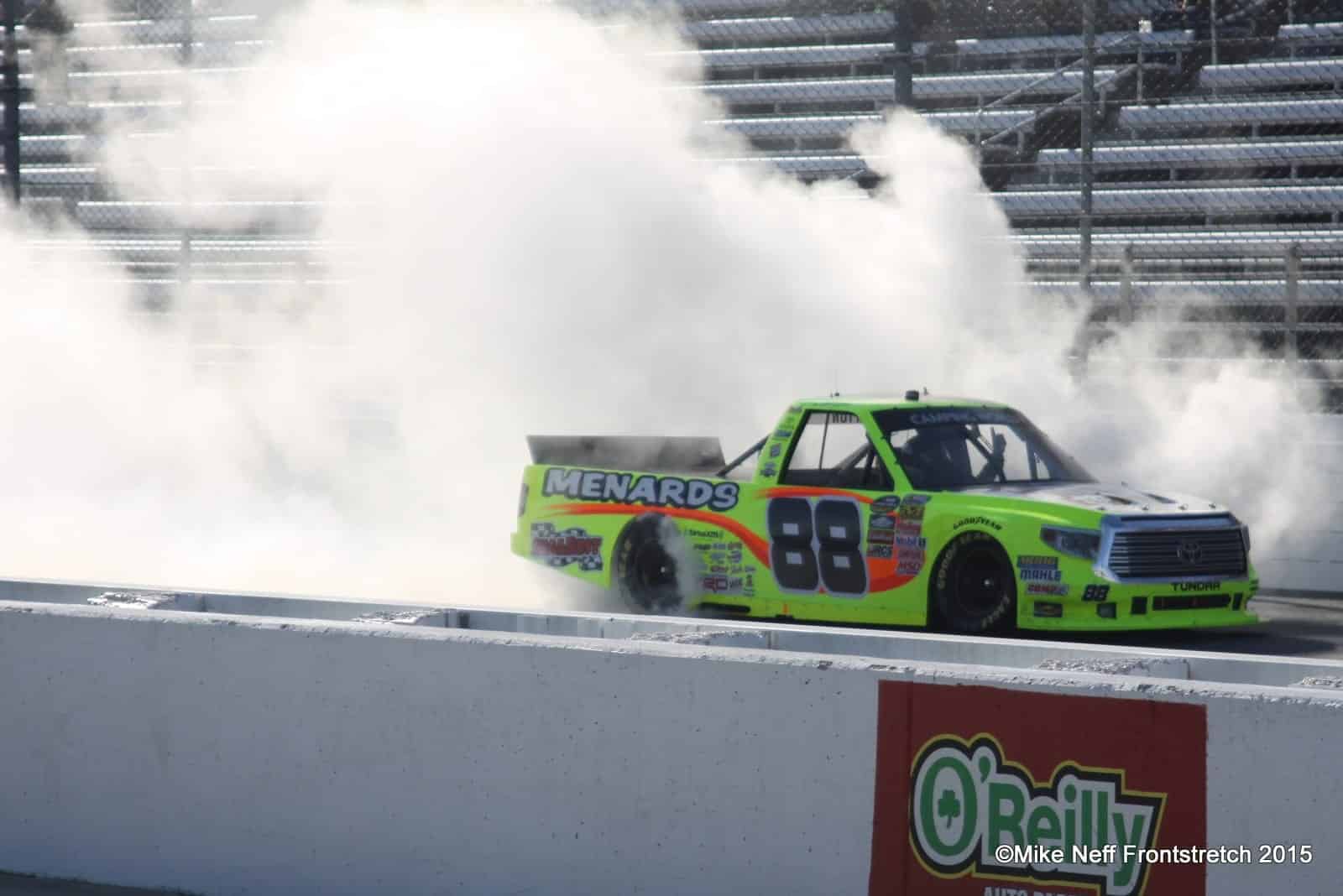 While the last few days have been lost in the shuffle due to the chaos of Matt Kenseth‘s NASCAR suspension, there’s still other racing news going on. The Camping World Truck Series, sitting above the fray continues to set up for an epic championship battle at Homestead-Miami Speedway.

Just when you thought reigning titlist Matt Crafton had walked away from the Big One at Talladega Superspeedway out of contention, stuck with a deficit that he wouldn’t be able to overcome, think again. Crafton went to Martinsville Speedway last weekend and made a statement, simply dominant earning his fifth win of the season. Surviving that carnage that saw the field slowed by 12 cautions for just over a third of the race (69 laps), the veteran charged from his 13th starting spot and was never seriously challenged once he got up front. His victory, combined with a 10th-place finish for Erik Jones and a fifth-place result for Tyler Reddick means the trio is now separated by just 13 markers with three races remaining on the schedule.

The momentum swing for the No. 88 team coming out of Martinsville is huge in this final stretch.

“If you look at the last couple races – Talladega, Las Vegas – we led the most laps in both of those,” Crafton said after his win. “I have no idea what we led today (63), but we led enough, and we led the right one. We’ve had very fast trucks and it’s all about what Junior (Carl Joiner, crew chief) and every one of these guys have been building and bringing to the racetrack. Finally, we have to finish what we started the last two weeks, and I felt that we should have won the last two. Talladega, you never know because it’s a crap shoot at the end, but we had a very fast truck. I just tried to manage my stuff [at Martinsville], keep my nose clean, be there at the end, and just not make any mistakes.”

Given that two of the three races remaining are on mile-and-a-half tracks, a length Crafton has excelled at the last few years, it’s absolutely believable that he could win two of the final three races this season. After all, the two-time champion has two wins at Texas Motor Speedway, including the June race this year, and while his results at Homestead resemble that of a roller coaster, the No. 88 team tends to find a little extra when their backs are against the wall.

That said, you can’t count out Jones. Yes, there’s reason to believe that he and the No. 4 team peaked at the wrong time in the season. Since his victory at Canadian Tire Motorsports Park, Jones has led just a combined 11 laps (five at New Hampshire and six at Talladega) while bringing home just a single top-five finish in the last five events. By comparison, in the first 15 races this year, Jones had two wins, nine top fives and led laps in all but three events.

That’s not to say that Texas this weekend won’t be some sort of a momentum swing in Jones’ favor, though. After all, he has an Xfinity Series victory at the mile-and-a-half oval earlier this year; the track has been notoriously kind to Kyle Busch Motorsports in general with the owner winning here last fall.

Meanwhile, it seems like Reddick is benefiting from all the attention thrown to Crafton and Jones in this battle. Quietly sitting 13 markers behind the leader and only three back from second, the No. 19 team has turned things around in recent weeks after a 19th-place run in Canada and a 15th at New Hampshire set them back. Results in the last three races – seventh, fifth and fifth – point toward a momentum shift for Reddick as well, and don’t forget that he did win the Texas pole last season.

The bottom line is that these next three races will be integral parts of a championship run for any of the trio of drivers that see the title currently within reach. If Crafton can take his mile-and-a-half success and turn it into wins at Texas and Homestead, it’s going to come down to whether Reddick and Jones can limit the damage done while trying to capitalize at Phoenix.

I’ve love to say I know who will come out on top. While my gut instinct still points me toward Crafton’s experience helping ThorSport Racing grab its third driver title in as many years it’s going to be a battle that comes down to the wire.