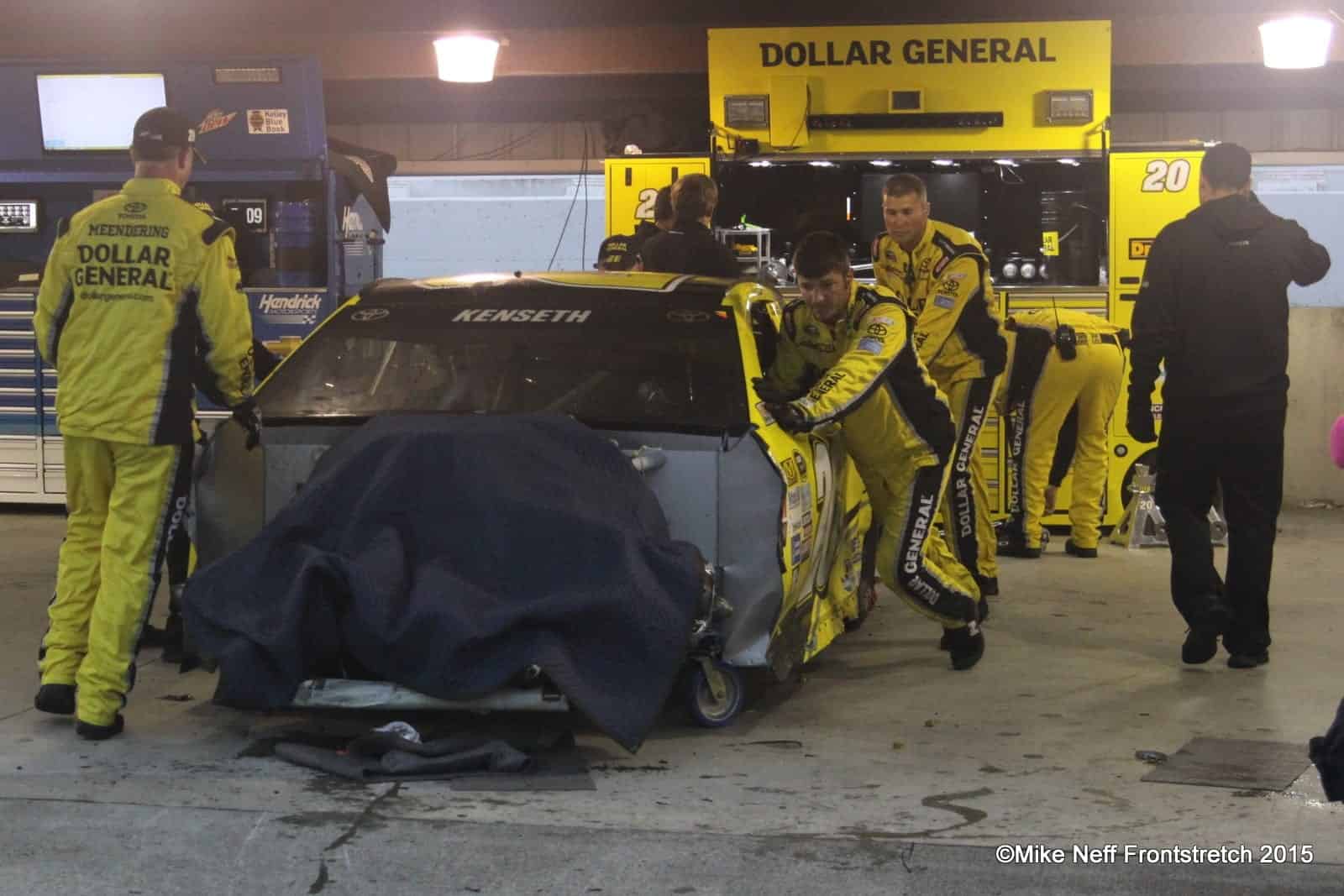 For any that have been living under a rock (and avoiding other articles on this site) significant penalties were handed out following the Goody’s Headache Relief Shot 500 at Martinsville Speedway. Among them were monetary fines, placement on NASCAR probation and the loss of points by both Matt Kenseth and Danica Patrick following intentional wrecks from both drivers.

While most have spent the better part of the last 48 hours debating the necessity of Kenseth’s two-race suspension, a few others have noted that the points penalties assessed to each driver appears to be of no consequence with both of them out of Chase contention.

The negligible effect of for each driver minimizes the effect of the penalty. By comparison, docking 25 points in the season finale at Richmond, say could have made the difference between someone making and missing the Chase. The implications produce our Two-Headed Monster debate of the week.

There should absolutely be a penalty for intentionally wrecking someone, but it shouldn’t be points.

Why? Because if we’ve learned anything with this new Chase format, it’s that points mean nothing.

So why should drivers be docked points for wrecking another driver intentionally? It means absolutely nothing in this built-for-those-with-short-attention-spans championship system. Instead, let’s look at a more fitting penalty, one that is white-hot in the press right now: suspension.

We’ll all agree that racing is a dangerous sport and intentionally wrecking (not spinning, but putting someone into the wall) only increases the opportunity that a driver doesn’t walk away healthy. There are also millions of dollars pumped into these programs that get thrown away with a wrecked racecar. There needs to be a serious deterrent in place so drivers don’t engage in such a practice.

Suspension gets the job done better than points ever could.

The driver code that has been all over the news is a good thing, but it isn’t law. Yes, Joey Logano broke the code weeks ago and Kenseth was completely justified in his retaliation on Sunday. But there are consequences for actions, and while Kenseth could in good conscience spin the No. 22 out, he has to accept the (rightful) penalty that came his way.

Think of it this way. Someone does me wrong in normal, everyday life. I exact revenge for the wrong, but I take it a step further and do something illegal back. Why shouldn’t I be punished with a fine, jail time, etc.? I might be justified, but I’m not right.

Intentionally wrecking someone has no place in our sport. Beating and banging? Sure. A bump and run? Yes. Even spinning someone by manipulating the air on the spoiler is fine. But once stock cars become weapons, suspensions need to be doled out.

See how easy that is? It’ll make drivers think twice before doing something stupid.

Suspension is a penalty that Kenseth can easily accept today. He’s out of the title hunt, so why not take matters into his own hands? Finishing 16th in the Chase is more than worth it if you can take out the driver who wronged you as well, right? He’ll appeal, of course, and with the inconsistent calls NASCAR has made regarding penalties, he should. Maybe he’ll see it reduced to a single race.

But following the NMAP’s decision, one part of the penalty will remain: a suspension will stand. Points don’t matter and moving forward I don’t think they should.

Given the precedent that NASCAR has set in recent weeks the organization has no choice but to take away points when it’s forced to penalize drivers and teams.

NASCAR made a bold, declarative statement in heavy penalties to both Kenseth and Patrick following a wild afternoon at Martinsville Speedway. While the topic has been run into the ground in the 48 hours following those announcements the precedent the penalties have set is important to note.

By punishing Patrick as well as suspending Kenseth, NASCAR has declared that going out of the way to crash another competitor, perhaps even if that person has done the same action to justify the move, will not be tolerated.

Sure, bumps while going for the win or even a Chase spot – hello, Kevin Harvick – appear to be tolerable, but attempting to knock a rival out for any other purpose will apparently no longer be accepted.

What this verdict has essentially done is take the “Boys, have at it” mindset oft-preached by both NASCAR and the sport’s fans and put an extreme cap on it. Gone are the days when a driver can dump another driver for revenge and get away with it, an offense that only led to probation as recently as 2010. Instead, drivers are expected to race their rivals hard, but no funny business. A clear line has been drawn in the sand here.

With the sudden shift to an anti-payback mentality – whether the decision be good or bad – it’s now up to NASCAR to appropriately penalize offenders because its competitors can no longer take matters into their own hands.

So, how do they do it? The answer is simple: Hit teams where it hurts. There are three places to effectively penalize teams: In the wallet, in the points standings and in the cockpit.

NASCAR utilized all three potential avenues for penalties following Martinsville, giving points and monetary penalties to both Patrick and Kenseth and taking Kenseth out of the cockpit pending the result of Thursday’s Joe Gibbs Racing appeal.

Fans can criticize the sanctioning body for their penalty decisions but the truth is that these consequences were chosen because they’re effective. Were lost points the hardest-hitting piece of the penalty? No. With the Chase underway and both Patrick and Kenseth eliminated, points affect little more than their ultimate finishing position.

However, penalizing teams points and money is the only fair way to give the offender the same loss, both monetary and in points, that they would see from payback in the form of a crashed racecar.

Driver and teams have been referring to NASCAR as the Wild West in recent weeks. The sport has responded by seizing the reins and issuing stiff responses to attempt to quell issues before they get any worse. Whether the decision was smart or terrible is up to interpretation, but with the precedent it sets NASCAR has to offer fair penalties – points included – to account for retribution that drivers are no longer permitted to obtain for themselves.

The new win and your in format have made points penalties as meaningless as monetary penalties for those that have won a race. It creates a two tier class system… those who can push the limits of all rules since they are already in and those who can’t afford to incur any points penalty. I’m not sure there is an answer because something is flawed with the win an your in policy. There is no way that a team should know they are in the “playoffs” if they win the first game of the season. However suspensions can only be considered for most blatant infractions. So how do you penalize someone who is already locked in during the first 26 races?

How about the penalty takes effect when the insane chase starts?

That is an excellent idea which is why it will never happen.

For those of you writing from under a rock perhaps the question of when and if to dock points should be postponed until the day when NASCAR decides to develope a consistent set of rules. 67 years after its inception and NASCAR still operates by a system of fluid ill thought out whims. If all penalties were decided by spinning the big wheel of misfortune it could be no less silly or inconsistent.

NASCAR is the one to blame for all of this. They created it for “excitement” and they’ve encouraged and condoned bad behavior before. I call BS on NASCAR for acting as though suddenly they are concerned for safety and fairness. Especially since they and the media will promote the heck out of all of this “action” for future races and the crapshoot.

No other sports sanctioning body does stuff like this. Most of them have actual rules with penalties in place.

NASCAR and much of the media wants to lie out of both sides of their mouths. Hypocrites one and all.

Step One: Stop awarding points for everybody. Only the top 25 get points. This will eliminate junkers from returning to the race track to get those valuable 1 or 2 points. Also make the 1st place finisher gets more meaningful points (like 1st: 50, 2nd: 40; 3rd-25th: descending to 1.

Step Two: Stop paying out monies for everybody. Finish 75% of the race to collect. This will virtually eliminate start & parkers.

Step Four: Abolish The Chase, The Playoff, The Circle Jerk – whatever you want to call it.

I’ll won’t be holding my breath on any of these suggestions actually being even considered.

Nascar has now put themselves in the position of basically having two different sets of rules for drivers on the track. If you’re in the ‘chase’ the consequences are different than if you’re not. That is but one reason why having an elimination system in place when all the players are still involved in every event is total stupidity. They created this atmosphere of desperation, than are surprised when it surfaces during a race? really? I can’t imagine they didn’t see this coming. If they didn’t want this sort of reaction, they should have had a meeting with Logano and Kenseth right after Kansas and told them the possible consequences if it continued. In my opinion, The blame for the whole thing rests squarely on Nascar’s shoulders.

Agree with that, salb

You can’t prove intent without a shadow of a doubt…

You can’t but, it’s not a murder one trial, you don’t have to. On the other end of the spectrum, Formula One will penalize you for even thinking about purposely wrecking someone. I do believe they kicked Nelson Piquet JR out for life for purposely causing a caution. All of this short track controversy/excitement is becoming tiresome. Thank goodness the Texas parade is next, I need a break from the drama. We can, however, count on Magic Man BZF to try to turn 1.5 miles into .5 miles with his bag of tricks. In hindsight, I regret losing perspective and getting wrapped up in this whole mess. It is manufactured for entertainment purposes only and should not be taken seriously. My wife walking past last night said “are you on that website again? What is that, a bunch of other people that hate NASCAR too?”. She has her Real Housewives and we have our NASCAR. Both guilty pleasures.