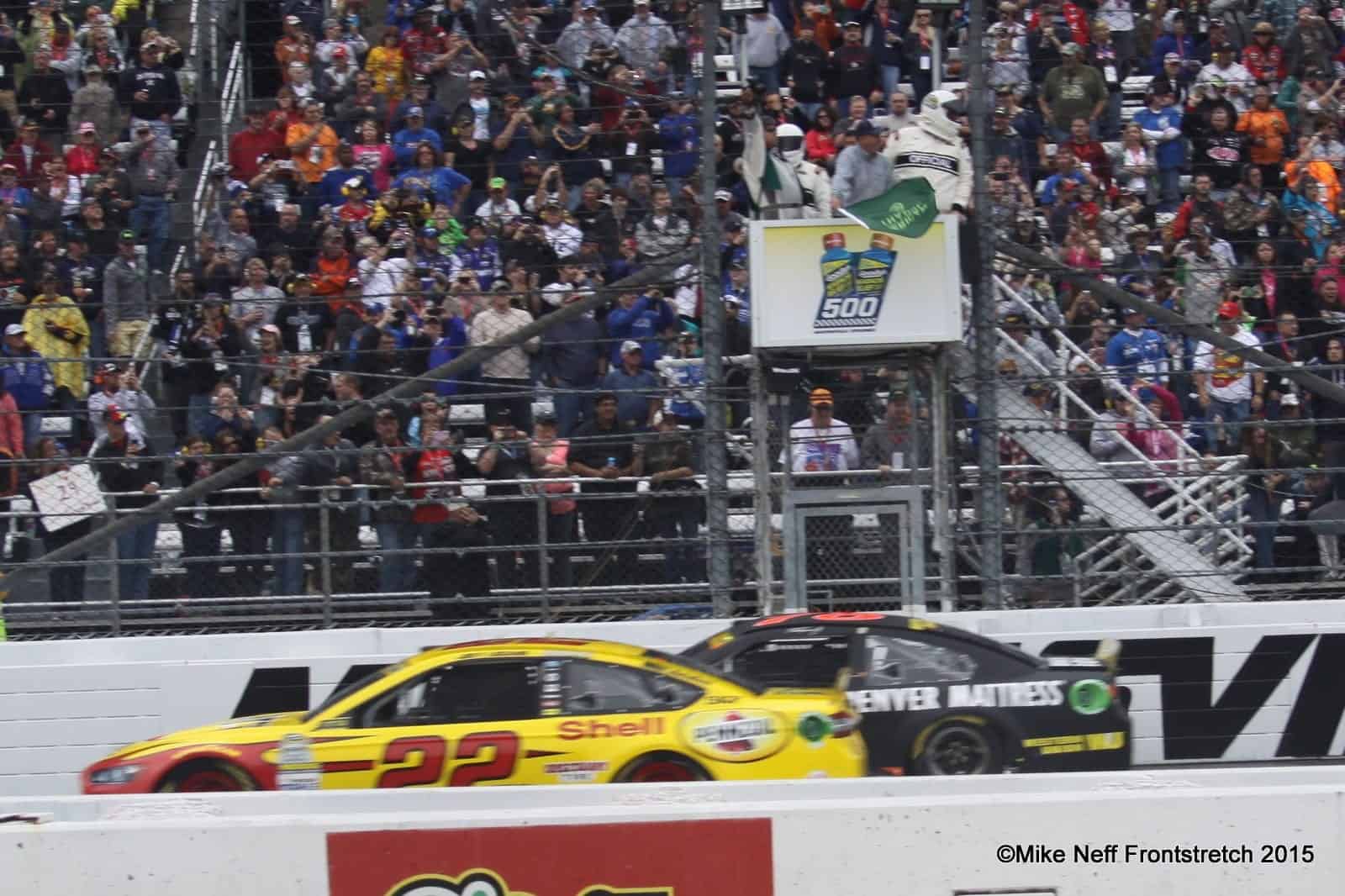 Heading into Texas Motor Speedway this weekend, all eyes were on Matt Kenseth‘s two-race suspension and the failed appeal, so naturally, many of Friday’s press conference questions surrounded the incident at Martinsville Speedway. That, of course, includes Joey Logano, who currently sits eighth in the standings, 38 points behind leader Jeff Gordon, with two races remaining to mount a charge at the championship.

“We are excited bout being here in Texas. This has been a great racetrack for us,” Logano said Friday, hinting at his hopes to recover from last week’s wreck. “We all know 1.5-mile tracks have been a Team Penske strong suit over the last couple of years. Our team is fired and ready to go. We know what we have to do; we have to go out there and win. The nice part about it is we know we can do it.”

And do it Logano can. After all, Logano has four top fives in his last five trips to Texas, including a win last spring. Plus, he boasts an average finish of just below fifth on mile-and-a-half tracks this season, including back-to-back wins at Charlotte and Kansas. But that success has also put an unintended target on Logano’s back to the point where the crowd erupted after Kenseth turned him last weekend.

“Was I surprised to see the fans’ reactions? Yes I was,” Logano said when pressed about the cheers. “That’s not what any racer would expect out of it. Instead of listening to the critics and fans that may not like me, I am going to look at the silver lining and know that I have more fans than I ever had before and I appreciated every one of them.

Though he may have been in the spotlight for all the wrong reasons the last few weeks after a controversial Kenseth spin at Kansas that the driver of the No. 20 Toyota determined was intentional and the payback that followed at Martinsville, Logano says he wouldn’t change a thing.

“I’m confident in the decisions I made as a drivers and the decisions we made as a team,” he continued. “That was a racing thing what happened at Kansas, and I wouldn’t expect a phone call from someone else if that happened. It was unfortunate, but I would understand if it happened to me.

“Everyone is entitled to their own opinion and can view it their own way, and I respect that. If every one of you guys in here today can think about the way they view the situation in different ways and I respect every one of them. That’s the cool part about our world and our life, that we can do that.”

As for Kenseth’s two-race suspension and how it will affect other drivers’ decision-making when there’s an on-track conflict? Logano expects that it might make some of his fellow competitors think twice but wouldn’t go as far as to say it would change their minds.

“I can’t answer that. I think we all did learn what NASCAR’s stance is on this, and that is something we will all put in our memory back and know that going into the future.”

Joey Logano had better get used to it. The fan animosity will only keep building. Just watch what will happen if he were to win another race, which he won’t this year, as Hamlin and Kenseth’s replacement will take care of that. Bet on it! If he were to win, what happened at Talladega will be nothing! Too, if anyone should be happy about that fan hatred, it should be Kyle Busch. He has now been replaced as NASCAR’s most hated driver.

Narcissism caused by Affluenza or just BS to incite drama? Says he respects all, right after characterizing the overwhelming majority as beer tossing primates who can’t stand up while simultaneously pushing his T-shirt sales. That’s right out of page 1 in the WWE playbook. All he needs now is a wrestling type fire suit, a black hat and a new nickname. Job well done suckling kangaroo baby. Hey, he went there first. Disclaimer: I press “Post Comment” while in the red mist of all the drama and against my better judgment. I shouldn’t be held responsible.

Joey boy is the perfect example of a spoiled little rich kid! His daddy “Tom Logano” is a mafia punk who made his money in waste management (which a book was even written about 10 years ago saying to survive in the business you have to be mobbed up or you get WHACKED, sadly tommy still here). Unlike so many of the rich kids who are now in NASCAR joey boy lacks humility and comes across as a kid who would have been beaten up every day had he not been “privileged”, A rich kid who is humble like the others in NASCAR is one thing but then to take rich, spoiled and a northeastern attitude to racing he will be hated by most forever.

He underestimates the fans –who enjoyed JL’s well deserved comeuppance.