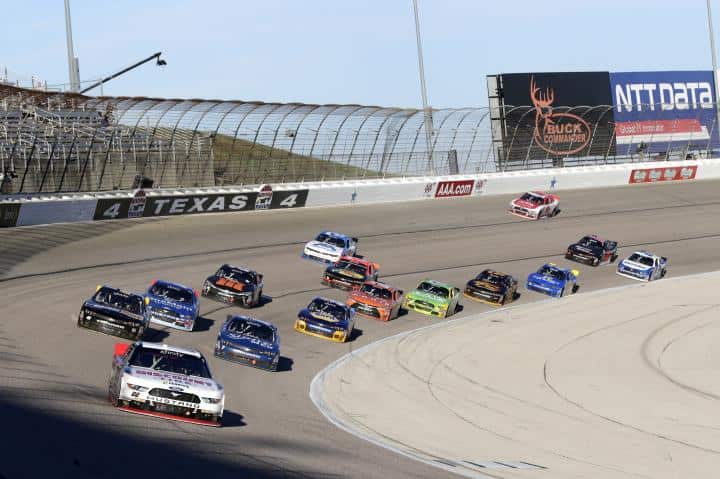 Sprint Cup Series: Is Team Penske Locked Out of the Final Four? – Fresh off of a controversial finish at Martinsville Speedway, teammates Joey Logano and Brad Keselowski found themselves in a must-win situation at either Texas or Phoenix to make the final four in the Chase. With Keselowski on the pole after leading practice and Logano “excited about being here in Texas,” hoping to capitalize on his past successes at the track, it looked like Team Penske had a good shot at getting one of its cars through with a win in Sunday’s AAA Texas 500.

But it wasn’t meant to be for Logano and the No. 22 team when, just 11 laps in, everything changed and the left-rear tire on his car “just blew apart off of turn 2 and shredded everything inside the car.” Though the team thrashed on it, and Logano had decent speed for the rest of the day, the damage was done; he finished 40th, 60 laps down.

Meanwhile, Keselowski dominated and looked easily on his way to Victory Lane as he led a race-high 312 laps, but a late debris caution that set up a short 18-lap shootout to the end allowed Jimmie Johnson to capitalize and snatch the win right out of Keselowski’s grasp, effectively locking Team Penske out of the final four at Homestead.

Not so sure? Hear me out here. Obviously Logano is in a must-win, given that he’s 63 points behind the cutoff line, and Keselowski isn’t in much better shape, despite a runner-up finish at Texas, now 21 back from the fourth-place cutoff. It’s almost a given that Kevin Harvick will win next week, especially given that he’s got seven victories overall and has won five of the last six races at the 1-mile oval.

Though the window opens slightly now with two spots up for grabs on points, some of the best in the business are going to have to make major mistakes to fall that far. Of course, it’s certainly possible that the No. 2 or 22 team could come out at Phoenix and steal one, but like Kyle Busch said during his post-race availability, “I do not think it’s a winnable race until Kevin Harvick gets beat.”

That doesn’t mean there won’t be at least a few drivers, still upset with Harvick after the melee that his move on the green-white-checkered finish at Talladega a couple weeks ago, who could see a gigantic target on the back of the No. 4 car at Phoenix. But with the way NASCAR took a stand following Matt Kenseth‘s actions at Martinsville, the field will likely think twice about making any moves to harm Harvick’s Chase chances.

One thing that we can walk away with and be sure of is that there will be fireworks at Phoenix. It’s just a matter of what kind we’ll end up seeing. – Beth Lunkenheimer

Xfinity Series: A Cup-Dominated Race That Wasn’t a Snoozer – For the first time in a while, a race which was dominated by the Cup Series stars wasn’t that bad. Throughout the race, Keselowski, Harvick, Austin Dillon and Kyle Larson swapped the lead multiple times. The intense scenario, created by tires wearing rapidly, was exactly what the NXS needed after a two-week hiatus.

Keselowski evidently came out on top, taking the lead from Dillon with 11 laps to go. With the intensity picking up, it provided fans with side-by-side racing throughout the day, featuring 17 lead changes, tied for the second most in the series’ history at Texas.

As for the championship battle, Chris Buescher overcame early struggles to finish 11th. His ill-handling car appeared in the top 10 for a brief period during the race, but was able to limit the damage. Chase Elliott ended the day in eighth, and is now 24 points back. Ty Dillon had the best finish of the title contenders in fifth, sitting 30 markers behind Buescher, with Regan Smith finishing ninth and one point behind Dillon. – Joseph Wolkin

Camping World Truck Series: Cameron Hayley Peaking at Right Time – While much of the focus in recent weeks has been solely on the trio of championship contenders, the season is quickly winding down with just two races remaining. Though we don’t have the 2016 schedule and many of the Truck Series rides don’t tend to come together until mid-January or later, a few of next year’s team moves have already begun to be revealed.

Perhaps the most surprising came a few weeks ago when it was revealed that Johnny Sauter would leave ThorSport Racing at the end of this season to return to racing Chevrolets with GMS Racing. With teammate Matt Crafton likely on the cusp of finishing runner-up in the championship battle to rookie Erik Jones, it’s a pivotal time for ThorSport as the organization works to solidify its 2016 lineup. There’s no reason to believe Crafton is headed anywhere, so he’ll likely return to pilot the No. 88 Toyota once again, but the bigger question marks come into who might fill the seat that Sauter is vacating.

Enter rookie Cameron Hayley, who has performed surprisingly well this season, especially given his rookie status and that a third truck for ThorSport has long struggled. Just ask Jeb Burton or Todd Bodine or Dakoda Armstrong…. The pivotal question that remains is whether the team will keep Hayley in the No. 13 and move another third driver into Sauter’s No. 98 or if it will drop the third ride altogether and tackle next year as a two-truck team once again, with or without Hayley behind the wheel in one of the two.

For his part of it, Hayley is peaking at the perfect time to make an impression within the series, despite a run that was “not the kind of night we wanted” with a 10th-place finish in Friday night’s WinStar World Casino & Resort 350, his fourth straight top-10 result and 12 overall this season. And given that he brings with him family money that will inject a substantial amount of life into any organization, it’s highly unlikely that he’ll be one of those young talents sidelined before ever ever. – Beth Lunkenheimer

Sports Cars: Offseason News is Fast and Furious – With the first open test in anticipation for the 2016 IMSA WeatherTech Championship season less than two weeks away, the announcements of new cars and driver pairings are coming on a regular basis now. For example, VisitFlorida.com Racing (also known as Spirit of Daytona) announced on Friday that Ryan Dalziel and Marc Goossens will be the full-time drivers of the team’s No. 90 Chevrolet Corvette DP Evo, replacing Michael Valiente and Richard Westbrook. Dalziel split last year between Extreme Speed Motorsports in the WEC (in addition to a one-off in the Rolex 24) and EFFORT Racing in Pirelli World Challenge. Goossens ran a limited schedule for Riley Motorsports in the GT-Daytona class. The team’s third driver for the endurance events is currently unannounced.

Last weekend also saw the official unveiling of Ferrari’s new sports car racers at the Mugello Circuit in Italy as part of the Ferrari World Finals (Note: This is a series of events featuring racers from the various regional Ferrari Challenge series, of which IMSA sanctions the North American series). Both the Ferrari 488 GTE and the Ferrari 488 GT3 will have twin-turbocharged 3.9 liter V8 engines. The GT3 challenger will use a version derived from the production 488, but detuned from the production model’s 661 horsepower. The GTE car will have a racing version of the 3.9 liter engine. The car will also have less downforce and will be faster.

In IMSA, more than likely, fans will see both versions of the car in competition next season. Risi Competizione will likely return to the GT-Le Mans class with a new 488 GTE. According to SportsCar365.com’s John Dagys, Scuderia Corsa, which made their GTE-Am debut at Le Mans in June, is currently considering whether or not to stay in GT-Daytona, or move up to GT-Le Mans. Regardless, they’ll definitely have a GT-Daytona entry at the Rolex 24 since they usually field a second car (at minimum) for the race. – Phil Allaway

Xfinity series is a snoozer BECA– USE it is dominated by Cupholes. Climb off Brian’s lap once in a while and take a look around. The Xfinity series stands are empty and the TV ratings are too low to measure. It hurts your credibility to write obviously false PR fluff.

I’m sorry, but any race involving Cup guys beating on the minor leaguers can have a photo finish and I wouldn’t think it was exciting. The series is unwatchable and has been for the past few years. Its no coincidence that ratings are terrible and grandstands are empty. But Cup guys are saving the series right? Ya right. This series is going down like the Titanic while those in Daytona Beach continue to leave their heads buried in the sand.