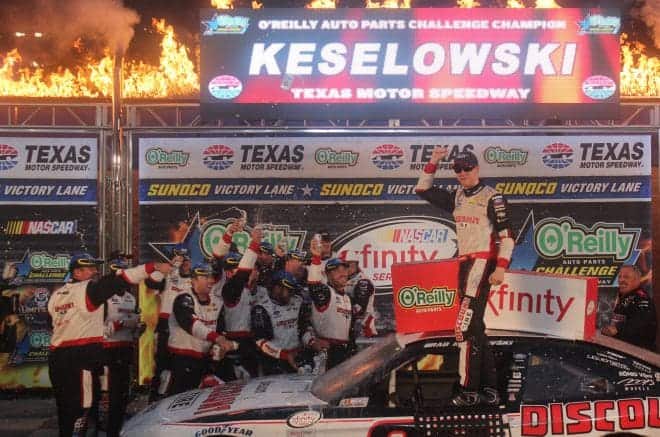 After facing a quiet track all day long due to lingering weepers from morning rains that ultimately canceled all on-track activity prior to the O’Reilly Auto Parts Challenge, the Xfinity Series finally took to the track roughly 30 minutes late. In a race that featured substantially more passing and on-track action than the Camping World Truck Series Friday night, Brad Keselowski took his second NXS win of the 2015 season in eight starts.

Prevailing in a three-wide battle for the lead with just 11 laps remaining, the driver of the No. 22 Team Penske Ford managed to pull well out front when Kevin Harvick and Austin Dillon engaged in a spirited side-by-side battle for second; the duo ultimately ended up second and third, respectively. Erik Jones, who is running triple duty this weekend finished fourth, while the highest finishing NXS regular was Ty Dillon, who rounded out the top five.

Keselowski, who never dropped lower than fourth throughout the entire race, save for a green-flag pit stop, also scored his second victory at Texas Motor Speedway (fall 2013). The win was enough to clinch the owners’ championship for Roger Penske. The No. 22 team, which split the seat time between Keselowski, Ryan Blaney, Joey Logano and Alex Tagliani, boasts seven wins this year – three for Logano and two apiece for Blaney and Keselowski – along with 23 top-five and 27 top-10 finishes in 31 races so far this season.

Meanwhile, Texas-native and points leader Chris Buescher played it safe and brought home his No. 60 AdvoCare Ford in 11th, enough to allow him to maintain a 24-point advantage over defending champion Chase Elliott. On the strength of his sixth top 10 in the last seven races, Ty Dillon moves up another spot to third in the standings holds a single-point advantage over Regan Smith, who is fourth after a ninth-place finish. Elliott Sadler rounds out the top five, 118 markers behind the leaders.

Ty Dillon flew largely under the radar for most of Saturday. After starting ninth, Dillon made little ground through much of the race. Then, in the latter stages, it’s almost like someone flipped a switch. With a late-race restart, Dillon saw an injection of energy and worked his way to a quiet, but solid, fifth-place finish, enough to gain some ground on point leader Buescher. And while the deficit of 30 markers is likely insurmountable, barring disaster for the No. 60 team, Dillon can be happy with a day where he stayed out of trouble and continued on a string of top-10 results.

Harvick turned what could have been an ugly day into a runner-up finish on Saturday. During the second caution, the driver oft he No. 88 JR Motorsports Chevrolet pitted a total of three times following concerns of a loose wheel. Mired deep in the field, Harvick methodically worked his way through and took advantage of a late-race caution to put himself back into the mix. Though he didn’t make it out of a three-wide battle for the lead with the top spot, he still managed to run down Austin Dillon, who had been in second with just a handful of laps remaining, turning a disaster into a respectable showing.

Truck Series driver Ray Black Jr. put together a last minute deal with Rick Ware Racing to make his NXS debut Saturday afternoon. When the field was set by practice times, following the cancellation of qualifying, Black started his No. 15 Burnie Grill Chevrolet in 22nd. Though he didn’t expect to be a contender to lead or win, the Florida-native didn’t expect to suffer a broken shock that left him just riding around in the latter stages of the race. Thanks to extended repairs and the inability to use the high line he would have preferred to, Black ended up 27th, eight laps down.

After a slip up in practice on Friday saw Darrell Wallace Jr. scrub the wall, the No. 6 team was forced to pull out its backup car for Saturday’s race. As a result, Wallace started at the rear of the field when qualifying was canceled. But it only got worse there for the NXS rookie, who suffered a loose wheel early. The unscheduled green-flag pit stop mired him a lap down, and Wallace was never able to recover; he finished 19th as the first car one lap behind the leaders.

Kyle Busch was running second when the second caution flew for Mike Harmon stalling on the track, and things went to bad pretty quickly before he ended up finishing 14th, stringing together a colorful line of expletives along the way. The driver of the No. 54 Toyota suffered gear problems and found his transmission stuck in fourth gear; not exactly what you want when there are pit stops to be made and restarts along the way. A late-race green-flag pit stop was nearly Busch’s undoing as he lost a lap after he was busted for speeding entering pit road, but he was actually helped by…

…Kyle Larson‘s misfortunes. After suffering a left-rear tire rub on every run all day long that had the team keeping constant watch of the smoke that poured off and on from the fender, Larson suffered a tire failure that saw him spin while leading and caused a substantial amount of damage to the left-rear quarterpanel. Instead of the victory he was well on the way to, Larson was left to settle for a disappointing 33rd-place finish.

Five drivers that ran the O’Reilly Auto Parts Challenge are Cup regulars that will run Sunday’s AAA Texas 500. Among those drivers were top-three finishers Keselowski, Harvick and Austin Dillon, along with Busch (14th) and Larson (33rd). Additionally, Truck Series drivers Erik Jones and Black Jr. finished fourth and 27th, respectively. Meanwhile, TJ Bell, who has made a handful of starts in all three series this season but is declared for points in the Cup Series, finished 38th before retiring just 12 laps in, citing electrical problems.

“First off, Austin Dillon was really good and he was one of the toughest guys to beat. He ran a heck of a race. Harvick looked really good, Kyle Busch looked really good and Kyle Larson I thought was going to run away with the race until he had that flat. There was a lot of competition out there today and that makes this win very special for the whole Discount Tire Ford team. I didn’t know what to expect [when we went three-wide late] but I didn’t give up. That is a big part of it. Winning never hurts to build confidence and a large part of this sport is confidence. I am really proud for the whole Discount Tire Ford team.” – Brad Keselowski

“To come out today and run as fast as we did in the Hunt Brothers Pizza Chevy was really fun. So I’m just proud of that. We had a little trouble on that last restart there and got behind and just took too long to get the track position back to where it needed to be. It was fun racing there at the end and we just came up one short.” – Kevin Harvick, finished second

“We just didn’t have what we needed. Really all day it seemed like we fought this thing and just couldn’t get it really up to run with the top three or four there. Just kind of a bummer that we just missed it a little bit. I thought we were a little bit better than that in practice, so we’ll go to work on this thing and get this GameStop Camry a little better for next time.” – Erik Jones, finished fourth

“We knew coming in we had to make up points in big chunks to be in the title hunt, and we had the opportunity tonight, but we got so tight in the last 80 laps that it made it difficult to do that. We gained a couple of points on the [No.] 60 car (Buescher), but we have to gain more than that to have a shot at this. Early in the race we were too loose entering the corners, but Jason fixed that for the most part, and on the next-to-last stop, it just went so tight all of a sudden, like someone flipped a light switch. Even on the final restart, where we had a chance to make up spots, it even got tight in traffic. I am scratching my head about how that happened. We’ll just have to go to Phoenix and try to knock more points off. It isn’t over.” – Regan Smith, finished ninth

The way you look at it, a lot of these races, especially these Xfinity races, are determined with the way the cautions fall and the adjustments and track position. Everyone was very concerned with tire wear on the green flag stops and the way the race kind of unfolded and Brad did a good job of keeping the tires on the car and we just kind of know that we had a little in the tank there at the end. I am just blessed to be a part of this thing and have guys with his kind of talent behind the wheel because that is really what makes it roll. When we told him it was time to go and there were only about 15 or 16 laps to go, you could really see it. The thing lit up. It was a good day. I am very, very happy.” – Greg Erwin, Brad Keselowski’s crew chief

The NXS heads out west to Phoenix International Raceway for the DAV 200 Honoring America’s Veterans, Presented by Great Clips next Saturday afternoon. Last year, Keselowski prevailed in a green-white-checkered finish over a dominant Kyle Busch. Race coverage begins at 4:00 p.m. ET on NBCSN; there are currently 41 drivers on the preliminary entry list, though Obaika Racing’s No. 97 is expected to be added.

The truly ugly point about this race was the pathetic television coverage and the total ignorance of ignoring one of the series underdog, Ryan Sieg. Sieg managed to stay on the lead lap all day, and even lead a couple of laps during one of the late pit stop cycles. The broadcast said nothing! But, they mentioned Dakoda Armstrong when he lead through that same cycle! Sieg managed to come home in 13th place, ahead of Kyle Busch. Quite the accomplishment for such an underfunded team. But no mention at all from the broadcast booth! No wonder this series is dead!

Last year, the points were far less tight at this time. Second place was all but mathematically eliminated. This year, there’s not even 2/3 spread in the top-4. All have at least a fighting chance, but it’s Chris Buescher’s to lose. A bad end to the season for Chris could give someone like Chase the championship, as the gap from 1st to 2nd is only half what it was a year ago. Next week may make it a battle for second, realistically.